The ASCO Post’s Integrative Oncology series is intended to facilitate the availability of evidence-based information on integrative and complementary therapies sometimes used by patients with cancer. Gary Deng, MD, PhD, and Jyothirmai Gubili, MS, present information on the potential health benefits of moderate consumption of green tea and explore clinical trial evidence on one of the most studied natural health products— epigallocatechin-3-gallate, a polyphenol compound from green tea.

CONSUMED WORLDWIDE, green tea is derived from the leaves of Camellia sinensis, an herb cultivated in East Asia, the Middle East, and some parts of Africa. It has a long medicinal history as a stimulant, diuretic, as well as an agent for wound healing and cardiovascular health. More recently, green tea and its extracts have been employed to prevent and treat hypertension, hyperlipidemia, atherosclerosis, and cancer.

The leaves used to obtain green tea, are not fermented but rather steamed or heated after harvest. This process retains the integrity of polyphenols, bioactive compounds to which beneficial effects are attributed.

Green tea is marketed as a dietary supplement in the form of capsules, extracts, and in ointments for external application. Despite its wide consumption for cancer prevention, definitive data are yet unavailable. 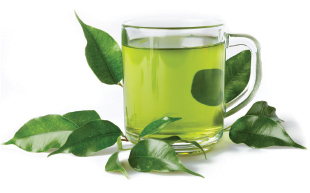 GREEN TEA and its extracts have been the focus of much research over the past few decades. The active constituent is epigallocatechin-3-gallate, which comprises nearly 40% of the total polyphenol content.

Data from clinical studies indicate that regular consumption of green tea may decrease the risk of hypertension1 and positively affect mood.2 It has also been shown to improve glucose tolerance in healthy individuals3 but not insulin sensitivity or glycemic control in people with type 2 diabetes.4 In addition, a large population-based study reported an association between green tea consumption and reduced mortality in patients with cardiovascular disease.5

Green tea extracts, applied topically, were also shown to be safe and effective against external genital and perianal warts in randomized trials.6-8 The U.S. Food and Drug Administration approved one such extract, sinecatechins (Veregen), for treating genital warts.

Investigations into the potential anticancer effects of green tea yielded positive findings, with preclinical, case-control, and prospective cohort studies reporting chemopreventive properties.9-11 In a nonrandomized study, a green tea extract (2,000 mg of EGCG, twice daily for up to 6 months) was reported to produce durable reductions in the absolute lymphocyte count and/or lymphadenopathy in patients with early-stage chronic lymphocytic leukemia.12 Also a case-controlled study found an association between green tea consumption and reduced risk of myelodysplastic syndromes.13

In randomized trials, supplementation with a blend of green tea, pomegranate, broccoli, and curcumin, daily for 6 months, resulted in a reduction in the rate of prostate-specific antigen (PSA) increase among men with prostate cancer after a PSA relapse postradical treatment.16 However, daily intake of 400 mg of EGCG for 1 year did not reduce the likelihood of prostate cancer.17 In addition, a meta-analysis of epidemiologic studies failed to find any benefits of green tea in preventing stomach cancer18; no association was observed between green tea and the risk of developing malignant lymphoma or multiple myeloma.19 Finally, another study finding suggests that consumption of green tea may increase the risk of breast cancer in postmenopausal women.20 Future randomized trials are needed to resolve the ambiguity, establish the optimal dose, and assess the long-term effects of green tea consumption.

Mechanistic studies indicate that green tea may confer cardiovascular protection by increasing high-density lipoprotein cholesterol, decreasing low-density lipoprotein cholesterol and triglycerides,21 as well as blocking platelet aggregation. The mechanism by which green tea influences blood pressure is thought to be mediated via EGCG modulation of vascular constriction. EGCG induces nitric oxide (NO) production through the activation of endothelial NO synthase, resulting in vasodilation.22

The anticancer effects of EGCG are thought to be via inhibition of enzymes involved in cell replication and DNA synthesis, by interfering with cell-to-cell adhesion or inhibiting intracellular communication pathways essential for cell division.25 Concentrations of 30 μg/mL of EGCG and (-)-epigallocatechin were shown to inhibit lipoxygenase-dependent arachidonic acid metabolism in human colon mucosa and colon tumors, which may alter the risk for colon cancer.26 Other studies suggest that EGCG inhibits topoisomerase I (essential for cell survival) in colon carcinoma cells and may hold therapeutic potential.27 EGCG was also shown to inhibit DNA replication in leukemia cell lines28 and to modulate vascular endothelial growth factor leading to apoptosis in leukemic cells.29

Preliminary clinical trial evidence suggests that epigallocatechin gallate (EGCG), a polyphenolic compound from green tea, may have anticancer effects. Although a dose of 200 mg of EGCG seems to be safe, higher doses may interact with some prescription drugs and may elevate liver enzyme levels. It is also important to distinguish food from concentrated supplements because the dosage varies considerably, which in turn can either confer benefit or cause harmful effects.

Additionally, administration of green tea was reported to inhibit ultraviolet B light–induced carcinogenesis30 and, when given before and during carcinogen treatment, to lower the incidence and number of gastric and esophageal tumors in a murine model.31

GREEN TEA is generally considered safe, but because of the caffeine content, excessive consumption can disrupt sleep and cause headaches. A few cases of hepatotoxicity have been associated with green tea extracts with high EGCG levels.32-34

ANTICOAGULANTS/antiplatelets: Consumption of large amounts of green tea (0.5–1.0 gallon/d) may provide enough vitamin K to antagonize the effects of anticoagulants and antiplatelet agents. Human data, however, are lacking.41

Bortezomib: EGCG and other polyphenols in green tea can inhibit the therapeutic effects of bortezomib (Velcade) and other boronic acid– based proteasome inhibitors.42

Tamoxifen: EGCG was shown to increase the oral bioavailability of tamoxifen in a murine model. However, the clinical relevance of this finding is not known.43

Verapamil: The bioavailability of verapamil increased significantly in the presence of EGCG, thought to be due to P-glycoprotein inhibition by EGCG.44

Irinotecan: EGCG was reported to inhibit transport of irinotecan and its metabolite SN-38 into biliary elimination, resulting in their enhanced half-life, which can increase toxicity.45

UGT (uridine 5'-diphospho-glucuronosyltransferase) substrates: Green tea modulates UGT enzymes in vitro and can amplify the adverse effects of drugs metabolized by them.46

Cytochrome P450 3A4 substrates: Green tea extract inhibits CYP3A4 and may affect the intracellular concentration of drugs metabolized by this enzyme.47

Acetaminophen: Green tea was reported to elevate acetaminophen-induced hepatotoxicity in a murine model.48

Nadolol: Green tea extract was shown to inhibit the OATP1A2 transporter and may negatively affect the absorption of substrate drugs, such as nadolol.49

For additional information, visit the “About Herbs” website at https://www.mskcc.org/cancer-care/integrative-medicine/herbs/green-tea.

GREEN TEA, when consumed as a beverage in moderate amounts, may confer health benefits. EGCG, a polyphenolic compound from green tea, is among the most studied natural health products. Preliminary evidence from clinical trials indicates it has anticancer effects. However, taken at high doses, EGCG is associated with transaminitis and may interact with certain prescription drugs. EGCG, at 200 mg twice daily, appears to be a safe dose.37 Patients taking EGCG at higher doses should be monitored for liver enzyme elevations. ■

43. Shin SC, Choi JS: Effects of epigallocatechin gallate on the oral bioavailability and pharmacokinetics of tamoxifen and its main metabolite, 4-hydroxytamoxifen, in rats. Anticancer Drugs 20:584-588, 2009.