Positive Results for APHINITY, but Value of Benefit of Dual HER2 Blockade Questioned

The results of the long-awaited APHINITY trial are in, and although the phase III study met its primary endpoint, it failed to establish dual HER2 blockade as the optimal adjuvant treatment for early HER2-positive breast cancer.

After 3 years of follow-up, the addition of pertuzumab (Perjeta) to trastuzumab (Herceptin) reduced the risk for invasive breast cancer by an absolute percentage of 0.9%. This translated into a 19% reduction in the risk for invasive disease–free survival, with a slightly greater benefit observed in higher-risk patients, reported Gunter von Minckwitz, MD, PhD, at the 2017 ASCO Annual Meeting.1

“These are very early results, but given the absolute benefit from adding pertuzumab was modest, we should consider using it primarily in women with the highest risk—those with node-positive and hormone receptor–negative breast cancer,” said Dr. von Minckwitz, President of the German Breast Group in Neu-Isenburg, Germany.

The small incremental difference may not be surprising, according to Dr. von Minckwitz, who noted: “Only 6% to 7% of these patients relapse at 3 years. The backbone therapy is already so strong, it’s almost impossible to reach a bigger absolute benefit.”

Investigators in the APHINITY trial randomly assigned 4,805 women with HER2-positive breast cancer > 1 cm to receive chemotherapy with either trastuzumab and pertuzumab or trastuzumab and placebo. Almost two-thirds had lymph node–positive disease, and one-third had hormone receptor–negative disease.

At 3 years, an estimated 94.1% of patients receiving pertuzumab were free of invasive breast cancer compared with 93.2% of those in the placebo group (hazard ratio [HR] = 0.81; P = .045). This result yielded a number-needed-to-treat of 112 at the 3-year point of observation. Three of five secondary endpoints were positive (Table 1).

“We saw around a 1% difference, but after 4 years, the curves were separating more, which will also decrease the number of patients to treat,” Dr. von Minckwitz noted. Disease-free survival at 48 months was 92.3% with the combination therapy and 90.6% with trastuzumab alone. In the node-positive and hormone receptor–negative cohorts, relative risk reductions were 23% and 24%, respectively, based on 3-year invasive disease–free survival absolute benefits of 1.8% (P = .019) and 1.6% (P = .085), respectively.

Breast cancer experts agreed that the use of adjuvant dual HER2 targeting should be limited to higher-risk patients, but even for this group, some questioned whether the relatively small benefit justifies the cost of adding pertuzumab.

The toxic effects and cost [of adjuvant pertuzumab and trastuzumab] are too great for too many to benefit too few.
— Kathy D. Miller, MD

The study was published simultaneously in The New England Journal of Medicine2 and accompanied by an editorial by Kathy D. Miller, MD, Ballve-Lantero Professor of Oncology at the Indiana University Melvin & Bren Simon Cancer Center, Indianapolis.3 “It is simply not feasible to add more and more therapy for all patients with HER2-positive disease who are selected only on the basis of anatomy,” she wrote. “The toxic effects (and cost) are too great for too many to benefit too few.” 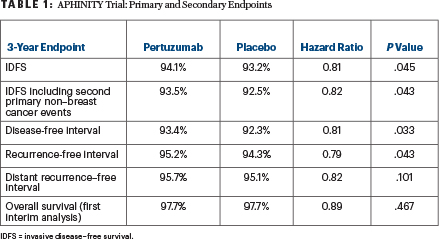 This sentiment was echoed at the ASCO session by Eric P. Winer, MD, Chief of Breast Oncology Center at the Susan F. Smith Center for Women’s Cancers and the Thompson Chair in Breast Cancer Research at Dana-Farber Cancer Institute, Boston. “We can conclude that we have a number of different drugs, all adding very modestly in this setting…. I think this is probably the end of large nonspecific trials in HER2-positive breast cancer. We need to work to sort out subtypes and prospectively ask questions in those settings.” ■

Several breast cancer experts weighed in on the findings of the APHINITY trial. At an ASCO press briefing, Harold Burstein, MD, Associate Professor of Medicine at Harvard Medical School and breast cancer specialist at Dana-Farber Cancer Institute, Boston, pointed out that...