An Exotic Journey Into Immunotherapy 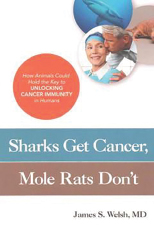 Title: Sharks Get Cancer, Mole Rats Don’t: How Animals Could Hold the Key to Unlocking Cancer Immunity in Humans

In his new book, Sharks Get Cancer, Mole Rats Don’t: How Animals Could Hold the Key to Unlocking Cancer Immunity in Humans, James S. Welsh, MD, examines a wide array of animal and human biologic phenomena, searching for clues that might help us unlock the full power of the human immune system. Dr. Welsh is Professor, Director of Clinical and Translational Research, and Medical Director of Radiation Oncology at Stritch School of Medicine, Loyola University, Chicago.

Sharks Get Cancer, Mole Rats Don’t is an admixture of multiple scientific disciplines elucidated through a series of case studies and adventurous jaunts into the unknown, which separates it from the vast majority of current books centered on cancer. It is organized in 36 clearly drawn chapters, all of which have enticing titles such as “Disappearing Devils,” “Gamma Rays,” and “Dinosaur Cancer.”

For all the fun and adventurous reading a book like this offers, its core value is based on cancer and the immune system. To that end, Dr. Welsh makes the wise decision to lead off with a dramatic case history, with which he was directly involved. If for no other reason to pick up this book, parties interested in immunology and cancer should read chapter one, “What Just Happened.” It tells the story of Daniel, a seemingly healthy guy in his 30s whose friend noticed a black blotch on the back of his neck that resembled bark one day during a pickup basketball game. It turned out to be malignant melanoma.

Despite aggressive combination chemotherapies, the cancer metastasized to the bone, causing such excruciating pain that even heavy doses of morphine failed to relieve it. He went to Dr. Welsh, hoping he could assuage the bone pain with radiation. At the time, he was in a wheelchair, unable to walk because of the lancinating leg pain.

“I could sense that he was suffering quietly as we spoke about his symptoms. We both hoped that I could target a dose of radiation to the bone tumor, shrinking it somewhat to offer a modicum of relief,” writes Dr. Welsh. Before initiating radiotherapy, Dr. Welsh did a bone scan; Daniel’s skeleton “lit up like a Broadway marquee.” The prognosis was grim: Daniel had about 4 months to live, and Dr. Welsh gave him a course of palliative radiation.

A week later on follow-up, Daniel happily reported that most of the pain symptoms were gone. Dr. Welsh scheduled a 3-month follow-up with a computed tomography (CT) scan, fairly sure he’d never see Daniel again. However, Daniel kept the appointment, announcing he was pain free, and, to Dr. Welsh’s surprise, he looked healthier.

When Dr. Welsh received the CT scan from the lab, he was dumbfounded. Daniel’s body was cancer free. What they had experienced was a phenomenon called the abscopal effect, a rare immune response that unleashes the full power of the immune system, attacking and killing tumors. Most responses are not durable, but Daniel’s case proved the cancer-killing power of the immune system. “When I first met Daniel, he wasn’t expected to live beyond 4 months—yet here he was, thanking me and striding away 4 years later,” writes Dr. Welsh.

After such a blockbusting opener, Dr. Welsh wisely follows by highlighting current work at Memorial Sloan Kettering Cancer Center, looking at the abscopal effect. Readers will be treated to an inside view of the studies being done in this fascinating area: one that Dr. Welsh and others believe “is part of a quiet revolution going on in cancer medicine.”

When I first met Daniel, he wasn’t expected to live beyond 4 months—yet here he was, thanking me and striding away 4 years later.
— James S. Welsh, MD

Dr. Welsh does a good job of mixing interesting narrative with hard science. However, some of the content is too challenging for the casual lay reader, requiring knowledge of basic scientific concepts, as in a chapter called “As Crazy as the Quantum Café.” This is one of the strongest scientific sections, looking at how cancer cells “hamstring” the immune system, using cloaking devices to “conceal their identity and avoid attack.”

Dr. Welsh has a knack for lively descriptors that elucidate his points. “The key to this immunologic corruption lies within the mysterious tumor microenvironment, which corrupts and cripples the immune system so that normal anticancer actions are stymied.” In this chapter, he delves into the workings of the innate immune system, breaking down complex biologic actions in sentences that will keep the reader wanting more. He writes, “Neutrophils are capable of engulfing enemy bacteria and bathing them in a sterilizing stew of hydrogen peroxide, superoxide radicals, and other potent antibacterial oxidizing agents.”

The headliners of the book—mole rats—are showcased in chapter 15, “Who Truly Doesn’t Get Cancer? Meet the Mole Rats.” Dr. Welsh notes that although the mole rat doesn’t get cancer, it’s one of the world’s less attractive creatures, described as a miniature pink walrus or a bratwurst with teeth. The mole rat’s immunity to cancer is not fully understood, but the author chases down every possible theory, making for an intellectually illuminating ride, some of which, again, will challenge the lay reader. Why don’t mole rats get cancer? “Blind mole rats seem to have their own built in factory for interferon production and tumor eradication.”

Dr. Welsh takes the reader on a curious trip down under, where the fabled Tasmanian devil is on a glide path to extinction by an epidemic of contagious cancer caused by a parasitic tumor. He also does a fine job of bringing the true father of cancer immunology, Dr. William B. Coley, to life—a true pioneer in the field who was unjustly maligned. “Coley achieved some spectacular cures, the treatment failed [U.S. Food and Drug Administration] approval standards…. Coley’s work and immunological theories were relegated to the fringes of medicine, his work consigned to the graveyard of the alternative-therapy world.”

Given that this book is rooted in immunologic explorations, chapter 19, “A Cancer-Free Clan,” stands out as one of Dr. Welsh’s best-written and most provocative sections. “Here we shall take an international tour and for the first time meet a group of people with an inherent and inherited protection from cancer.” These people have Laron syndrome, first reported in 1966 by an Israeli endocrinologist. In short, they belong to a sect of obese Semitic dwarfs living in a remote area in Ecuador who are seemingly immune to cancer. Here, Dr. Welsh combines his writing skills with dashes of the exotic to deliver a first-rate look at one of the world’s hidden medical wonders.

Sharks Get Cancer, Mole Rats Don’t is a riveting and original book that defies typecasting. Serious readers will enjoy every edifying page. This book is highly recommended for The ASCO Post readers. ■