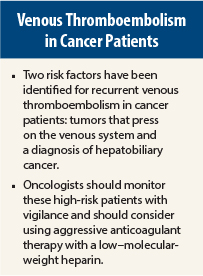 The analysis of this large randomized controlled trial … found that patients with a tumor mass compressing the venous system and patients with hepatobiliary malignancies were at highest risk of recurrent [venous thromboembolism].

Patients with cancer who develop venous thromboembolism are at high risk of such obstructive disease recurring despite adequate anticoagulation. A prespecified analysis of the CATCH trial identified two major predictors of recurrence: venous compression by the tumor and a diagnosis of hepatobiliary cancer.1

The CATCH study was a prospective, open-label, multicenter clinical trial that included more than 900 patients being treated for active cancer who developed acute, symptomatic proximal deep venous thromboembolism and/or pulmonary embolism.2 They were randomly assigned 1:1 to 6 months of anticoagulation with tinzaparin (Innohep) at 175 IU/kg once a day vs initial tinzaparin (low–molecular-weight heparin) transitioning to dose-adjusted warfarin (target of international normalized ratio [INR] 2–3).

The post hoc analysis, presented at a poster session during the 2015 ASCO Annual Meeting, was designed to identify risk factors for recurrent [venous thromboembolism] in the CATCH trial. The investigators evaluated multiple clinical variables that were present at or prior to randomization. Metastatic disease was present in 492 patients (54%), 288 (32%) were on chemotherapy, 281 (31.8%) were recently hospitalized, 209 (23.2%), had [Eastern Cooperative Oncology Group (ECOG)] performance status of 2, 129 (14.3%) had venous compression from the tumor, and 92 (10.2%) had undergone recent radiation therapy.

“[Venous thromboembolism] is a clinically important and common issue in cancer patients that may be overlooked. It is the second leading cause of death in cancer patients, equal with infection. This study should raise our awareness. The prespecified subgroup analysis of the CATCH trial adds to our knowledge about which patients are at higher risk,” said Marc Carrier, MD, MSc, FRCPC, Associate Professor at the University of Ottawa, Canada, who was not involved in this analysis.

“The risk of recurrent [venous thromboembolism] despite anticoagulation and of major bleeding while on anticoagulant therapy is increased in cancer patients. If we can identify who is at highest risk of a recurrent event, then clinicians can tailor their management accordingly,” Dr. Carrier continued.

Disclosure: Dr. Khorana has received honoraria from and has served as a consultant/advisor for AngioDynamics, Daiichi Sankyo, Genentech, Johnson & Johnson, Leo Pharma, Halozyme, Pfizer, and Sanofi. He has received research funding from Leo Pharma. Dr. Carrier has received research support from Leo Pharma and honoraria from Sanofi-Aventis, Pfizer, Boehringer Ingelheim, Leo Pharma, and Bayer and has served on scientific advisory boards for Sanofi-Aventis and Leo Pharma. For full disclosures of the CATCH study authors, view the study abstract at abstracts.asco.org.