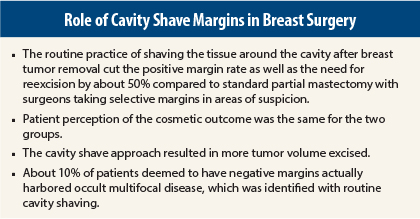 This is the first prospective randomized controlled trial [of this approach], and it provides level 1 evidence that cavity shave margins reduce the rate of positive margins and the need for reexcision by 50%. I believe it is practice-changing.

Taking additional tissue circumferentially around the cavity left by partial mastectomy (“cavity shave margins”) cut the rate of positive margins by nearly 50% and the rate of reexcision for margin clearance by more than 50% compared with standard partial mastectomy with or without the surgeon taking selective margins in suspicious areas of the cavity left by removing the tumor, according to a prospective randomized trial of women with stage 0 to III breast cancer.1 The study was presented at the 2015 ASCO Annual Meeting and published in The New England Journal of Medicine to coincide with the ASCO presentation.2

“Performing cavity shave margins on all patients undergoing standard partial mastectomy can cut the need for additional surgery by 50%, which has huge consequences for patients and for the health-care system,” stated lead author Anees B. Chagpar, MD, MPH, Director of the Breast Center at Yale University’s Smilow Hospital, New Haven, Connecticut.

“Cavity shave margins will spare patients the trauma of unnecessary surgery and allow them to start curative treatment more quickly, rather than delay the time until they can be treated with chemotherapy and radiation,” she continued. “This is the first prospective randomized controlled trial [of this approach], and it provides level 1 evidence that cavity shave margins reduce the rate of positive margins and the need for reexcision by 50%. I believe it is practice-changing.”

The study also found no difference in women’s perception of cosmesis whether they were randomly assigned to shaved margins or selective margins. Interestingly, routine cavity shaving enabled identification of cancer in 12% of patients previously deemed to have negative margins.

“This calls into question the accuracy of margin status in predicting residual disease. Our study, and other studies, have shown that some patients with negative margins have multifocal disease detected only after cavity shaving,” Dr. Chagpar said.

“Although the argument could be made that finding additional occult disease may not affect outcome, excising additional disease in more than 10% of patients may have a significant long-term effect on the rate of local recurrence,” she added.

Partial mastectomy is commonly performed for women diagnosed with breast cancer, and margin status is a determinant of recurrence. About 20% to 40% of women have positive margins following partial mastectomy that require a reexcision for margin clearance.

Prior to this study, some surgeons believed that cavity shave margins should be routinely performed, while others felt that taking selective margins while performing surgery was the best strategy, Dr. Chagpar explained.

The study randomly assigned 235 patients with stage 0 to III breast cancer who were undergoing planned partial mastectomy with or without resection of selective margins (surgeon’s choice for best operation) to have further cavity shave margins resected (“shave group”) or not (“no-shave group”).

Intraoperatively, the four surgeons in the study were given a sealed envelope with the randomization assignment, which they opened (by the circulating nurse) after they completed standard partial mastectomy. Surgeons were instructed to perform partial mastectomy according to their usual practice, whether or not this included resection of margins where the tumor was thought to be close to the edge of the specimen based on imaging, their own observation, or both.

The median age of patients was 61 years. Final pathologic testing showed that 54 patients (23%) had invasive cancer, 45 (19%) had ductal carcinoma in situ, and 125 (53%) had both; 11 patients had no further disease. Clinical and demographic characteristics were well matched at baseline. The rate of positive margins prior to randomization but after partial mastectomy was similar in the shave and no-shave groups: 36% and 34%, respectively.

This is a significant study. About 30% of patients who undergo breast-conserving surgery or partial mastectomy are likely to have positive margins. Optimal treatment is to remove the entire tumor surgically and then follow with radiation. Standard practice requires reexcision for positive margins,” ...