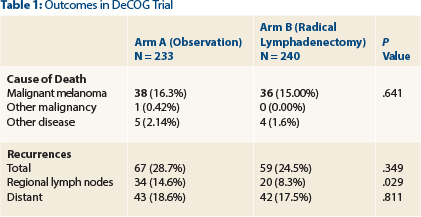 Based on our findings, complete lymphadenectomy cannot be recommended in melanoma patients with micrometastases.

“This is the first study that tested the typical recommendation of complete lymph node dissection in patients with positive sentinel nodes, and we cannot confirm this recommendation,” said senior study author Claus Garbe, MD, Professor of Dermatology at the University of Tübingen, Germany, speaking at a press briefing.

Investigators screened 1,269 patients who had stage III cutaneous melanoma of the trunk and extremities and positive sentinel lymph node biopsy. All patients had micrometastases but no palpable nodes.

Of them, 473 patients ultimately agreed to randomization and were included in the intent-to-treat analysis: 233 in the observation arm and 240 in the complete lymph node dissection arm. Patients had a median tumor thickness of 2.4 mm, and about 40% of tumors were ulcerated. Both cohorts underwent close monitoring for 3 years, including lymph node ultrasonography every 3 months and computed tomography/magnetic resonance imaging or positron-emission tomography scans every 6 months.

“The radical lymphadenectomy arm had less metastases in the regional nodal basin, which was the only statistically significant difference,” she noted.

Dr. Leiter emphasized that accrual to the study was difficult—only one of every three patients agreed to be randomized—and therefore the study population was smaller than designated by the study design. “It was powered to detect a difference of 10% [in the primary endpoint], and to date, that difference in both arms was only 1.1% and the difference in the 3-year distant metastasis free survival was 0.3% (80.4% vs 80.1%).” The investigators will conduct another analysis in 3 years. ■

Lynn Schuchter, MD, of the University of Pennsylvania, Philadelphia, a designated ASCO expert, commented at the press briefing that the results might apply to a select group of patients concerned about lymphedema but not yet to the broader population. “I would say that this is a really important...