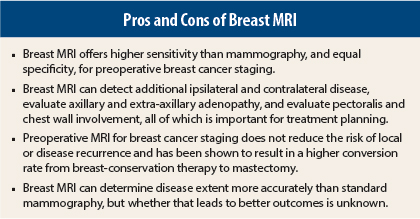 Pros and Cons of Breast MRI

Why wouldn’t we want to use the test that’s proven to be the most sensitive and just as specific [as mammography]? … There are many benefits to breast MRI that are really not debatable.

[Breast MRI is a] promising tool. As radiologists, we want it to be successful. But this debate is not about radiologists, it’s about the patient … and delivering maximum value to the patient.

Breast magnetic resonance imaging (MRI) is superior to more commonly used imaging modalities in preoperative breast cancer staging and should be a key element in routine workup. But despite its high sensitivity for catching cancers, breast MRI still does not deliver maximum value for the patient. Those were the respective arguments two radiologists made during a debate on presurgical breast MRI at the American Roentgen Ray Society 2014 Annual Meeting in San Diego.1

Dr. Comstock pointed out that mammography, with all its limitations, is the standard for preoperative imaging. But breast MRI has proven itself to be a higher-caliber imaging tool, so “why wouldn’t we want to use the test that’s proven to be the most sensitive and just as specific [as mammography]? Why wouldn’t we want to use the test that is not inhibited by breast density to define the extent of disease? There are many benefits to breast MRI that are really not debatable,” he said.

As proof of breast MRI’s sensitivity, Dr. Comstock cited data from the American College of Radiology Imaging Network (ACRIN) 6666 trial, which found that the addition of screening MRI to mammography in women at increased risk of breast cancer resulted in a higher cancer detection yield at 14.7 extra cancers per 1,000.2

He also noted that breast MRI can detect additional ipsilateral and contralateral disease, evaluate axillary and extra-axillary adenopathy, and evaluate pectoralis and chest wall involvement, all of which is important for treatment planning.

Critics of breast MRI will claim that the additional disease found with the modality is “clinically insignificant” because it will be treated with radiation therapy. “But if the additional disease is never clinically significant, that implies surgery is not needed in the first place—that you can treat everything with radiation therapy—and that’s clearly not the case,” Dr. Comstock argued.

Not relying on breast MRI to find contralateral disease could lead to inadequate treatment of occult cancers, he said. In addition, the ability to assess the axilla can help direct full axillary dissection and help guide treatment for women with significant adenopathy.

Finally, breast MRI can reveal distant metastases of the pectoralis muscle and chest wall, which is key for effective disease staging. Dr. Comstock cited results from a study that used breast MRI to assess disease extent in patients with posterior breast masses with suspected tumor invasion into the underlying muscle.3 The study authors reported that MRI results showed enhancing masses in all cases, with more than a quarter of the patients having masses that “abutted the muscles, with obliteration of the fat plane and muscle enhancement. All five had muscle involvement at surgery,” he said.

“Finding that extra disease may benefit survival, not to mention alleviate the psychological stress a woman can experience when the additional disease is found and she has to undergo treatment again,” Dr. Comstock pointed out.

Dr. Comstock addressed some of the criticisms leveled at breast MRI, most notably that it has a high false-positive rate. But he noted that the positive predictive value of the modality is in the 20% to 40% range, which is similar to that of mammography, and much better than than of breast ultrasound at 8% to 9%.

Dr. Eby called breast MRI a “promising tool. As radiologists, we want it to be successful. But this debate is not about radiologists, it’s about the patient … and delivering maximum value to the patient. How do we measure that value? We should do that based on a set of outcomes that matter to the patient.” Those outcomes are service, treatment outcomes, cost, and appropriateness, he explained.4

Dr. Eby acknowledged that breast MRI can find additional disease, and that constitutes a potentially beneficial service given that breast cancer is often a multifocal disease. But the data have shown that MRI will detect ipislateral lesions in 16% of patients and contralateral disease in 4%.

“MRI is more sensitive to finding [additional disease], but it’s not finding all of it,” Dr. Eby cautioned. In terms of outcomes, do results with this sensitive tool translate into improvements in survival, recurrence, margin status, and reoperation rates? In general, the answer is “no,” Dr. Eby said.

“Survival is something that, as breast imagers, we really try to hang our hats on. Screening mammography has been shown to improve survival,” he said, pointing out that based on Surveillance, Epidemiology, and End Results data, 5-year survival rates approach 99% for localized disease and 90% for all cancer stages combined.5 On the other hand, studies have yet to show a survival benefit with breast MRI, he stated.

A 2014 meta-analysis of “individual person data” found that preoperative MRI for breast cancer staging did not reduce the risk of local recurrence or disease recurrence, Dr. Eby pointed out. And results from another study demonstrated a higher MRI-related conversion rate from breast-conservation therapy to mastectomy.6,7

As for recurrence, research has shown that for 8-year local recurrence, there is no significant decrease in recurrence rates for patients who have had a preoperative breast MRI, Dr. Eby said.6,8 The same can be said for reoperation rates, with no difference between patients who did or did not undergo breast MRI.9,10

In terms of cost, Dr. Comstock mentioned that the price tag for breast MRI is dropping, with the current Medicare reimbursement rate at around $800. He also stressed that more expensive studies, such as whole-body MRI for cancer staging or lumbar MRI for back pain, don’t receive as much financial scrutiny as breast MRI.

Dr. Eby countered that there is more to the cost of a breast MRI than the single study, including the cost of callbacks for additional studies, biopsies, treatment delays, and anxiety for the patient.

Dr. Eby questioned the appropriateness of breast MRI in terms of its contribution to patient management. Even among radiologists, the answer to the question of appropriateness is not clear: According to a 2013 revision of the American College of Radiology’s practice guideline, breast MRI determines the extent of disease more accurately than standard mammography, but it remains to be shown conclusively that the increase in accuracy results in any reduction in recurrence rates following surgery, radiation, or systemic therapy.11

Dr. Eby and Dr. Comstock said they are looking forward to results from the newly launched ACRIN 6694 trial that will evaluate the effect of preoperative breast MRI on surgical outcomes, costs, and quality of life in breast cancer patients. Dr. Comstock, a co–prinicipal investigator, emphasized that the trial will be powered to look at long-term recurrence at 5 years.12 ■

5. Cancer of the Breast—SEER Stat Facts Sheets. Available at  seer.cancer.gov/statfacts/html/breast.html.

11. ACR Practice Guideline for the Performance of Contrast Enhanced Magnetic Resonance Imaging (MRI) of the Breast. Available at www.acr.org.