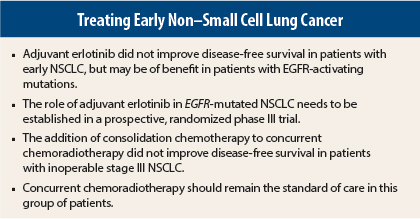 It is urgent that we develop newer strategies that will improve the outcome of inoperable stage III NSCLC, such as the incorporation of novel agents including immunotherapy or molecular targeted therapy.

Separate studies in early-stage non–small cell lung cancer (NSCLC) found that the addition of consolidation chemotherapy to concurrent chemoradiotherapy did not improve survival and that adjuvant erlotinib (Tarceva) did not improve survival. There was a suggestion of benefit for adjuvant erlotinib in patients with EGFR-mutant disease, but this was found in an exploratory subset analysis, and experts said a phase III trial is needed to clarify that finding.

Erlotinib has proven efficacy in second- and third-line therapy for NSCLC, as well as in first-line maintenance therapy in unselected patients and first-line therapy in patients with EGFR-activating mutations, she explained. Although adjuvant chemotherapy for early-stage NSCLC has improved the 5-year survival rate from 60% to 64%, not all patients are candidates for cisplatin-based regimens due to toxicity concerns.

Some exploratory analyses of previous studies suggested that EGFR protein expression by immunohistochemistry (IHC) and EGFR high copy number or amplification by fluorescence in situ hybridization (FISH) may be predictive markers of benefit for EGFR tyrosine kinase inhibitors. RADIANT was designed to test this hypothesis and included patients with EGFR IHC-positive and EGFR FISH–positive stage IB to IIIA early NSCLC.

Following complete resection, 973 patients, regardless of whether they received adjuvant chemotherapy, were randomly assigned 2:1 to erlotinib at 150 mg/d or placebo for 2 years. The primary endpoint was disease-free survival, and secondary endpoints were overall survival, and both disease-free and overall survival in patients with del19/L858R EGFR mutation–positive disease.

The study was conducted from September 2006 to July 2010. Per the hierarchical testing procedure, if the primary endpoint was not met, then all subsequent endpoints would be deemed not significant.

Baseline characteristics were well balanced in both arms. The average age was 62 years, 80% were white, and 17% were Asian; 20% were never smokers, and the majority of patients had stage IB adenocarcinoma.

A subset analysis of the RADIANT population with EGFR-mutated disease (n = 161 patients) showed a similar treatment duration for erlotinib (21.2 months) and placebo (21.9 months).2 Treatment was completed as planned in 47% and 50% of patients, respectively. Adverse events were similar to those seen in the overall trial.

For patients with locally advanced stage III inoperable NSCLC, three cycles of consolidation therapy with cis­platin and docetaxel made no difference in overall survival or progression-free survival, according to a phase III trial reported at the 2014 ASCO Annual Meeting.3

From October 2005 to April 2011, 437 patients with stage III NSCLC and no evidence of progression on concurrent chemoradiotherapy with radiation, cisplatin, and docetaxel were screened; 437 were randomly assigned to consolidation therapy with cisplatin and docetaxel or observation. Due to consent withdrawal, adverse events, disease progression, or death, however, about one-third of patients in the consolidation arm did not receive any consolidation treatment, and accrual to the trial was slow, Dr. Park said. An interim analysis in 2009 showed no safety issues.

For the final analysis, 171 patients were evaluable in the observation arm and 173 in the consolidation arm. The median age was 61 years, the majority were males, about 50% had adenocarcinoma, and about one-third had squamous cell histology. About 80% were Korean, 17.4% were Chinese, and 1.4% were from Taiwan; 25% had stage IIIA, and 75% had stage IIIB disease.

About 54% of patients in each arm experienced treatment failure: the locoregional failure rate was 49.6% with observation vs 44.6% with consolidation therapy; distant failure rate was 43.5% and 50%, respectively. The brain and lung were the most common sites of metastasis.

There were no unexpected toxicities during consolidation therapy, and those that occurred were tolerable and manageable, Dr. Park said. The rates of adverse events were higher in the consolidation arm.

“It is urgent that we develop newer strategies that will improve the outcome of inoperable stage III NSCLC, such as the incorporation of novel agents including immunotherapy or molecular targeted therapy,” Dr. Park told listeners. ■

Formal discussant of the study by Park et al, Nasser H. Hanna, MD, Associate Professor of Medicine at the Indiana University Simon Cancer Center, Indianapolis, said that the trial confirms the difficulty of giving consolidation therapy, since less than two-thirds of patients were able to get the...