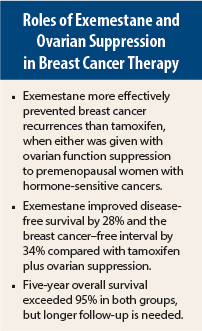 Roles of Exemestane and Ovarian Suppression in Breast Cancer Therapy

Our study suggests that for some premenopausal women with hormone-sensitive tumors, exemestane and [ovarian suppression] can replace chemotherapy.

“This joint analysis provides new and long-awaited information on how to treat premenopausal patients with hormone-sensitive breast cancer who have the potential to be cured,” said ASCO Immediate Past President Clifford A. Hudis, MD, FACP, at a press conference during the 2014 ASCO Annual Meeting, where these data were presented at a Plenary Session.1 Study results were published simultaneously online in The New England Journal of Medicine.2

“Exemestane was previously recommended only for postmenopausal women. This analysis demonstrates that an aromatase inhibitor is effective adjuvant therapy for premenopausal women when combined with ovarian suppression. Exemestane [plus ovarian suppression] is a valid alternative to tamoxifen [plus ovarian suppression] in young women with hormone-sensitive early breast cancer. It is a new adjuvant treatment option that reduces recurrence in this setting,” said lead author ­Olivia Pagani, MD, Clinical Director of the Breast Unit at the Oncology Institute of Southern Switzerland in Bellinzona. Optimal endocrine therapy for premenopausal women is still uncertain, she said.

Ovarian suppression is used more frequently in Europe than in the United States to achieve low estrogen levels in patients with hormone-sensitive breast cancer. Tamoxifen is considered the standard of care in this setting, and adjuvant chemotherapy is sometimes used depending on the judgment of the patient’s risk by the oncologist and patient preference.

Overall, two-thirds of patients were aged 40 to 49; and 42% node-positive; 62.3% had tumors of 2 cm or less; and 12% were HER2-positive. Chemotherapy was given at the discretion of the treating physician, and 42.6% did not receive chemotherapy. In a separate interview, Dr. Pagani explained that 21% of TEXT patients and 8% of SOFT patients who did not receive chemotherapy had tumors larger than 2 cm and some positive nodes, usually considered adverse prognostic features that can lead to the prescription of chemotherapy.

Among patients who did not receive chemotherapy and were treated with exemestane and ovarian suppression, 97.6% of the TEXT population and 97.5% of the SOFT population were free of breast cancer at 5 years.

The overall survival rates were high in the two groups and not significantly different. At 5 years, overall survival was 95.9% in the exemestane group and 96.9% in the tamoxifen group. However, it is premature to determine survival, Dr. Pagani said.

Side effects of both drugs were similar to what is reported in postmenopausal women. Adverse events that were more frequent with exemestane included fractures, musculoskeletal symptoms, vaginal dryness, decreased libido, and dyspareunia. Those more frequently reported with tamoxifen included thromboembolic events, hot flushes, night sweats, and urinary incontinence. Adherence was very good in both arms, with only 14% of patients interrupting both treatments before 5 years.

Gynecologic cancers were reported in seven exemestane-treated patients and in nine tamoxifen recipients. Endometrial cancers occurred in two and five patients, respectively. About 30% of patients in both arms experienced grade 3 or 4 adverse events.

At the press briefing, Dr. Hudis said, “This is a long-awaited study that addresses a question rooted in the very beginning of modern breast cancer therapy a century ago. While this result supports the use of [ovarian suppression] and [aromatase inhibitors] in premenopausal women with hormone-sensitive early breast cancer, we still need to see the results of the tamoxifen-alone arm to complete the picture.” ■

This study provides key insights into the longstanding and vexing debate about optimal systemic therapy for these young women. We wonder about the role of tamoxifen, aromatase inhibitors, chemotherapy, and ancillary therapies like bisphosphonates,” said Nancy E. Davidson, MD, Director of the...