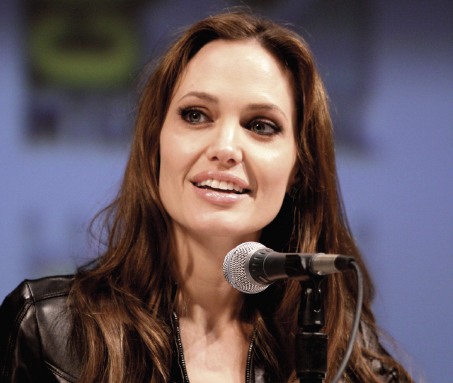 Angelina Jolie’s decision to undergo a prophylactic double mastectomy has been receiving much media attention.

[Ms. Jolie] apparently went to a genetic counselor, had appropriate genetic tests, and acted on it. I think that is a good message, as opposed to someone who thinks she is at high risk and goes to a surgeon’s office requesting a double mastectomy without getting accurate information.

Angelina Jolie, in a New York Times article entitled “My Medical Choice,”1 disclosed that having a BRCA1 mutation and an estimated 87% risk of breast cancer, “I decided to be proactive and minimize the risk as much I could. I made a decision to have a preventive double mastectomy.” She was writing about it, she explained, “because I hope that other women can benefit from my experience.”

The many media reports about Ms. Jolie’s choice mean that many women have undoubtedly learned about her experience, but the impact remains uncertain. Some commentators have applauded Ms. Jolie’s decision to speak out about the issue, while others have expressed concern that it could lead to an increase in women seeking unnecessary treatment.

Ms. Jolie’s article presents “a good message,” Todd M. Tuttle, MD, MS, told The ASCO Post. He noted that the “red flags” in Ms. Jolie’s history—her mother died of cancer at age 56, and Ms. Jolie carries a BRCA1 mutation—were recognized and heeded. “She apparently went to a genetic counselor, had appropriate genetic tests, and acted on it. I think that is a good message, as opposed to someone who thinks she is at high risk and goes to a surgeon’s office requesting a double mastectomy without getting accurate information.” Dr. Tuttle is Chief of the Division of Surgical Oncology at the University of Minnesota in Minneapolis and Medical Director of the University of Minnesota Breast Center.

Immediate Past ASCO President Sandra Swain, MD, FACP, expressed a similar opinion about Ms. Jolie’s medical decision and its disclosure, in comments for the PBS NewsHour blog, The Rundown.2 “I think the way she handled it is a great model for everyone because she’s really done it so carefully, so thoughtfully, and she’s speaking out which will really help other women,” Dr. Swain said. “She talked to the genetic counselor and took her time to make the decision. That was really important for everyone to see.” Dr. Swain is Medical Director of the Washington Cancer Institute at the MedStar Washington Hospital Center in Washington, DC.

Dr. Tuttle estimated that currently, “probably more than 50% of medically fit women with an identifiable gene mutation will undergo risk-reduction surgery,” and the figure could be even higher. “I think women who decide to get the test, get the test to act on it. And I think probably the most definitive way to act upon it is to have a preventive mastectomy,” he stated.

Having researched and written about the increasing use of contralateral prophylactic mastectomy among women with cancer diagnosed in one breast,3 Dr. Tuttle said that there also seems to be an increase in the number of women choosing bilateral prophylactic mastectomies. “We don’t have as much data on women who do not have breast cancer as we have for women who have unilateral breast cancer, because those patients aren’t captured in cancer registries,” he explained.

Women who test positive for a BRCA mutation and are planning to have a prophylactic mastectomy may not necessarily choose to have the surgery right away. “I think that is one of the differences between women who don’t have breast cancer and who are deciding to have prophylactic surgery vs those who have cancer in one breast and decide to have the other breast removed. For some women who have breast cancer in one breast and have been diagnosed, it’s almost like they sense a ticking clock,” Dr. Tuttle said. They think, “I’ve got to have surgery. I want to have surgery done in the next few weeks, and I am going to take care of both problems at the same time.”

He noted, “the vast majority of women who have breast cancer in one breast and choose to have a double mastectomy do not have a gene mutation.” Women who do test positive for the gene mutation, but “who don’t have cancer, are healthy, have normal examinations and normal mammograms, and have time to assess the situation, talk to their doctors and really understand the risks and complications of what they may potentially get into,” he stated.

In The New York Times piece, Ms. Jolie said her doctors estimated that she had an 87% risk of breast cancer and a 50% risk of ovarian cancer. “I made a decision to have a preventive double mastectomy. I started with the breasts, as my risk of breast cancer is higher than my risk of ovarian cancer, and the surgery is more complex,” Ms. Jolie wrote. (She did not provide any more specific information about having or planning to have surgery to remove her ovaries.) She wrote that following her double mastectomy, “My chances of developing breast cancer have dropped from 87% to under 5%.”

It is not always possible to provide such a precise number for the percentage of risk reduction, Dr. Tuttle said. “In general, we tell women that their lifetime risk is about 70% to 80%, but it depends on the age at which they were tested and a bit about their family history and when their family members developed breast cancer,” he continued. “Then the data are pretty solid that the relative risk reduction is about 90% to 95%. So bilateral mastectomy doesn’t eliminate the risk of breast cancer, but it can certainly reduce the risk.”

Women who have had prophylactic bilateral mastectomies should continue to have routine physical examinations as well as follow-up of any symptoms, Dr. Tuttle advised. “I don’t obtain mammograms or MRIs on patients who’ve had prophylactic surgery,” he said. “In those rare cases in which women do develop breast cancer after prophylactic surgery, most of the tumors are found by the women themselves on physical examination underneath the skin.

Removal of the Ovaries

According to the National Cancer Institute (NCI),4,5 there is “solid evidence” that prophylactic oophorectomies in women with BRCA gene mutations decrease breast cancer incidence by 50% and ovarian cancer by 90%. The National Comprehensive Cancer Network (NCCN) Guidelines for Breast Cancer Risk Reduction also include both bilateral mastectomy and bilateral salpingo-oophorectomy for women who have known or strongly suspected BRCA1/2 mutations and desire risk-reduction therapy.6 Some women chose to have both breasts and both ovaries removed at the same time, whereas others wait until after they are done having children to have their ovaries removed.

“It is probably more important for the ovaries to come out, because we can screen very carefully for breast cancer, but ovarian cancer is much more difficult to screen for and often presents much later,” Dr. Tuttle said. For women with BRCA mutations, “you really can expect risk-reduction surgery that is a combination of mastectomies and oophorectomies to improve survival,” he stated.

Most women who undergo double mastectomies do choose to have breast reconstruction, according to Dr. Tuttle. “In the United States now, the most common type of breast reconstruction is to have a temporary tissue expander followed by a permanent implant. A silicone implant is probably the most common type today,” Dr. Tuttle said. Autologous flap procedures, using tissue from another part of the patient’s body to create breasts, “were very popular in the 1990s but have lost a bit of their popularity in the past decade or so,” Dr. Tuttle added.

Tissue expanders followed by a permanent implant is also the type of reconstruction chosen by Ms. Jolie. “You wake up with drain tubes and expanders in your breasts,” she wrote. “It does feel like a scene out of a science-fiction film. But days after surgery, you can be back to a normal life.”

Tamoxifen and raloxifene are “not consistently” recommended for women with BRCA mutations, according to Dr. Tuttle. “Sometimes these drugs are recommended for women with BRCA mutations who haven’t decided whether to have prophylactic surgery or sometimes just until they have surgery,” Dr. Tuttle said. These may be women who choose “to be screened for a few years and maybe wantto reduce their risk a little bit, and tamoxifen or raloxifene may reduce their risk of developing estrogen receptor–positive breast cancer over a short period of time.”

For women who are identified with the BRCA mutation and choose not to have surgery—at least not in the near future—follow-up usually consists of alternating clinical breast examinations, mammography, and breast MRI. “Our practice here is clinical breast examinations a couple of times a year and then mammography and MRI sequenced every 6 months. That is a pretty common screening strategy for those women,” Dr. Tuttle said. ■

For women who are considering prophylactic bilateral mastectomies, “I strongly encourage genetic testing, Todd M. Tuttle, MD, MS, said in an interview with The ASCO Post about the increased interest in preventive double mastectomy following Angelina Jolie’s disclosure that she had the procedure to...