The first statistically significant overall survival benefit has been shown for a cyclin-dependent kinase (CDK) 4/6 inhibitor plus endocrine therapy as first-line treatment of advanced breast cancer. The results are from the phase III MONALEESA-7 trial, which evaluated ribociclib plus endocrine therapy exclusively in peri- and premenopausal women with hormone receptor–positive, HER2-negative disease.

“Ribociclib plus endocrine therapy was associated with about a 29% relative reduction in risk of death,” according to Sara A. Hurvitz, MD, Director of the Breast Cancer Clinical Research Program at the UCLA Jonsson Comprehensive Cancer Center in Los Angeles, who presented the data at the 2019 ASCO Annual Meeting.1 The study was concurrently published in The New England Journal of Medicine.2

“This is the first time that a statistically significant improvement in overall survival has been observed with a CDK4/6 inhibitor in combination with endocrine therapy in patients with hormone receptor–positive HER2-negative advanced disease,” Dr. Hurvitz said. She emphasized that an overall survival benefit was shown for the combination despite the fact that patients with metastatic breast cancer typically receive multiple subsequent agents after coming off clinical trials. “It’s very difficult to show a survival benefit in these studies,” she noted.

The findings of MONALEESA-7 may -influence the choice among the three approved CDK4/6 inhibitors in the clinic. “I think that as clinicians we have been quite comfortable using these agents interchangeably … based on copay assistance, dosing, and side-effect profile. But now, we have survival benefits associated with one of them, and until we see that with other agents, this may influence the way physicians practice,” Dr. Hurvitz said at a press briefing.

MONALEESA-7 randomly assigned 672 women to endocrine therapy alone (letrozole, anastrozole, or tamoxifen, by physician’s choice) or the same plus ribociclib (600 mg/d for 3 weeks on, one week off). All women also received goserelin.

Importantly, the study was the first dedicated trial of endocrine therapy with and without a CDK4/6 inhibitor—ribociclib, in this case—in women younger than age 59 (ie, peri- or premenopausal). 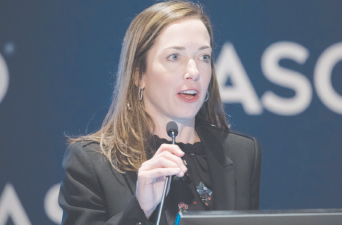 In 2018, the investigators reported that MONALEESA-7 met its primary endpoint, with ribociclib plus endocrine therapy prolonging progression-free survival to 23.8 months, up from 13.0 months with endocrine therapy alone (hazard ratio [HR] = 0.55; P < .0001).3 At the ASCO Annual Meeting, Dr. Hurvitz reported the results for overall survival, which was the key secondary endpoint. Median follow-up was 34.6 months, which was an additional 15 months beyond the primary analysis.

For the smaller subgroup of tamoxifen-treated patients, median survival was not reached with the combination, nor was it reached with endocrine therapy alone in that comparison (HR = 0.791). Tamoxifen, however, was associated with an increase in QT-interval prolongation ≥ 10 milliseconds; therefore, the investigators concluded that tamoxifen should not be used with a CDK4/6 inhibitor.

The safety profile for ribociclib was consistent with its known tolerability profile. As of the data cutoff, 35% of patients in the ribociclib arm were continuing treatment. ■