The evidence is in: the Affordable Care Act (ACA) has enabled improved access to earlier diagnosis, earlier care, and reduced racial disparities in access to care for patients with cancer, according to two studies presented at the 2019 ASCO Annual Meeting. In states that adopted Medicaid expansion under the ACA, prior racial disparities in access to timely cancer treatment were no longer observed, according to results of a study presented at the Plenary Session.1

A separate study found that after implementation of the ACA in 2010, women with ovarian cancer were more likely to be diagnosed at earlier stages and to be treated within 30 days than in previous years.2 And, a third study showed that private insurance, higher income level, better education, and treatment at an academic medical center improved survival for patients with multiple myeloma.3

At a press conference where these studies were discussed, ASCO Chief Medical Officer Richard L. Schilsky, MD, FACP, FASCO, FSCT, commented: “The take-home message from these three studies is the importance of access to care and timely care. If you can’t get care, you can’t benefit from care.”

“Racial disparities in cancer-related care access and outcomes exist across the trajectory of cancer care from prevention to survival. This disparity is well documented, and there is a lot of interest in developing mechanisms to reduce disparities and improve timely access to cancer care,” said senior study author Amy J. Davidoff, PhD, MS. “One potential mechanism for improved access is insurance coverage under the ACA. Our study provides evidence that Medicaid expansion [under the ACA] can mitigate certain health disparities.” Dr. Davidoff is Senior Research Scientist in Health Policy and Management at the Yale School of Public Health and a member of the Yale Cancer Center, New Haven, Connecticut.

The ACA granted states permission to expand Medicaid coverage for near-poor adults (< 138% of the federal poverty guidelines) and to provide subsidies for people to buy private insurance if they did not qualify for Medicaid. Medicaid is administered by each state and provides full health-care coverage for low-income people. States that expanded Medicaid under ACA have witnessed large increases in enrollment, including newly eligible people and eligible people who had not enrolled previously.

The researchers examined de-identified electronic health record-derived data from Flatiron Health of people diagnosed with cancer treated at 280 community-based cancer clinics or academic medical centers, for a total of 800 sites of care. The analysis included 30,386 people between the ages of 18 and 64 diagnosed with advanced or metastatic solid tumors between January 2011 and January 2018. Cancer types included lung, breast, urothelial, gastroesophageal, colorectal, renal cell, prostate, and melanoma.

Regression analysis adjusted for covariates such as patient characteristics, unemployment rate, stage, practice characteristics, state, and calendar quarter. The median patient age was 57 years, nearly half were male, and about three-quarters were white. In the unexpanded cohort, 14.6% were black compared with 8.7% in the expanded cohort.

“This study extends prior evidence regarding the effect of the ACA and tells us that national health-care coverage policies may reduce disparities. Electronic health records can be a valuable resource for research on treatment patterns, disparities, and interventions,” Dr. Davidoff stated.

Commenting on this study at a press conference, ASCO expert William Dale, MD, PhD, Chair of Supportive Care Medicine, City of Hope, Duarte, California, said: “This work is to be commended. This is some of the best evidence we have to date that policies can impact outcome, particularly timely treatment. Everyone benefits and has some level of improvement. People falling behind before had access to care, and disparity disappeared after Medicaid expansion. It is difficult to do a randomized study in social science. The design of this study compared states that accepted expansion with those that did not. It is impressive to see a notable change that was statistically significant. I love when we have evidence like this to inform policy.”

A separate study based on data from the National Cancer Database found that implementation of the ACA led to earlier diagnosis and treatment of ovarian cancer among women younger than age 65.

“More than 22,000 women will be diagnosed with ovarian cancer this year, and just half will be alive in 5 years. We have no screening methods for detection, and by the time patients are symptomatic, the disease is often diagnosed at an advanced

stage,” explained Anna J. Smith, MD, a resident in the Department of Gynecology and Obstetrics, Johns Hopkins Baltimore. “We were interested in determining what the impact of the ACA was on an earlier stage at diagnosis and treatment of ovarian cancer, since the ACA hs been shown to improve access to care and primary care.” Amanda Nickles Fader, MD, is coauthor of the study.

Data were collected on women diagnosed and treated for ovarian cancer between 2004 and 2009 (pre-ACA; 35,842 patients) and between 2011 and 2014 (post-ACA; 37,145 patients). Stage at diagnosis and time to treatment were assessed for women between the ages of 21 and 64 years and compared with a group of women aged 65 and older (controls, since they had access to Medicare and were more likely to be insured pre- and post-ACA).

“The implications of our study are that under the ACA, women with ovarian cancer are more likely to be diagnosed at an early stage and to receive timely treatment. These gains may have a long-term impact on survival, health, and well-being for women diagnosed with ovarian cancer,” Dr. Smith said.

At a press conference, ASCO expert Merry-Jennifer Markham, MD, Associate Director for Medical Affairs at the University of Florida Health Cancer Center, Gainesville, Florida, weighed in on this study. “Ovarian cancer is a deadly disease. When it is diagnosed at later stages, the prognosis is much worse than in stage I or II. This study shows that access to health insurance can increase earlier diagnosis and treatment, and this should ultimately improve long-term outcomes for women with ovarian cancer.”

In a similar vein related to access to care, a third study found that insurance status, higher income level, and treatment at an academic center improved survival for patients with multiple myeloma. In this study, neither race nor gender had a significant impact on survival. 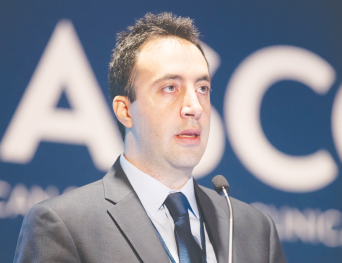 “The outcome of patients with multiple myeloma has dramatically improved due to novel agents and autologous stem cell transplant,” said lead author Kamal Chamoun, MD, a fellow in the Hematologic Malignancies and Stem Cell Transplant Program, University Hospitals, Seidman Cancer Center, Cleveland. “Multiple myeloma is the number one cancer treated with oral medications, and the cost of treatment is high, nearly tripling since 2000. Out-of-pocket costs for patients with myeloma who have Medicare are significantly higher than for patients with other types of insurance, leading to treatment delays, partial treatment, and discontinuation of treatment. We need to take action to limit and reverse the disparity for those who cannot afford private insurance or have lower incomes.”

An adjusted analysis found a survival advantage for people older than age 65 who had private insurance: the median overall survival was 41.9 months vs 30.8 months for those with Medicare. This difference was not statistically significant. “A higher proportion of patients with higher income had private insurance, and treatment at an academic center was associated with a survival advantage,” Dr. Chamoun stated.

ASCO Expert Catherine Diefenbach, MD, of NYU Langone Health, New York, commented on this study. “Where you live and what insurance you have should not affect survival for patients with multiple myeloma. Unfortunately, Dr. Chamoun’s study

shows that it does. Having private insurance, living in a higher income area, and receiving treatment at an academic center are associated with better and longer survival for patients with multiple myeloma.”

Dr. Chamoun shared a relevant case from his own practice. “I have a patient with myeloma whose out-of-pocket costs were $20,000 per month, which he was not able to afford. Our institution was able to get this copayment down to $40 a month, but not all institutions have this infrastructure. These financial challenges are creating real differences in survival. We should all strive to give patients equal access to high-quality care,” she stated. ■

At the Plenary Session, formal discussant of Dr. Davidoff’s study, Yousuf Zafar, MD, of Duke Cancer Institute, Durham, North Carolina, gave an impassioned talk about the need to address racial disparities in cancer care. “This is a nontraditional study to be selected for the...