The text and photographs on this page are excerpted from a four-volume series of books titled Oncology: Tumors & Treatment, A Photographic History, by Stanley B. Burns, MD, FACS, and Elizabeth A. Burns. The photos below are from the volume titled “The X-Ray Era: 1901–1915.” The photographs appear courtesy of Stanley B. Burns, MD, and The Burns Archive. To view additional photos from this series of books, visit burnsarchive.com.

Within 2 months of its discovery, x-ray’s invisible light was being used to treat breast cancer. Chicago medical student Emil H. Grubbe was making Crookes vacuum tubes for physicists when Wilhelm Röntgen announced his discovery of the x-ray in November 1895. Mr. Grubbe immediately began modifying the tubes to produce x-rays. He noticed his hands developed burns while working with the new tubes, and a professor at the medical school hypothesized that they were caused by the new rays. Hoping to “burn out” cancer, on January 29, 1896, one of Mr. Grubbe’s professors allowed him to use x-rays to treat a patient who had a recurrent breast carcinoma. With the apparent success of the treatment, 17 more sessions were carried out, and radiation therapy was born.

In 1893, prior to Mr. Röntgen’s discovery of the x-ray, Dr.Niels Ryberg Finsen (1860–1904) set an important new therapeutic precedent when he used the curative power of ultraviolet rays to treat skin diseases. Dr. Finsen’s discovery, called photo or light therapy, won him the 1903 Nobel Prize. During the first 2 decades of the 20th century, both x-ray and phototherapy were developed and became important therapeutic modalities. Phototherapy effectively treated and cured not only skin diseases, but tuberculosis, the primary killer in this era, as well. Tens of thousands of patients were saved by its use, yet Dr. Finsen’s name and accomplishments are relatively unrecognized today.

By 1903, several texts were produced extolling the virtues of x-rays. In July 1903, William Allen Pusey, MD, Professor of Dermatology at the University of Illinois, and Eugene Wilson Caldwell, an engineer and Director of the Gibbs X-ray Laboratory University and Bellevue Hospital in New York, published a 670+ page text, The Practical Application of the Roentgen Rays in Therapeutics and Diagnosis. In this landmark work, produced only 7 years after the discovery, Dr. Pusey outlined his techniques for treating dermatitis; tuberculosis; cutaneous carcinoma; breast cancer; and deep-seated cancers of the esophagus, abdomen, rectum, and larynx as well as sarcoma and leukemia. Dr. Pusey’s emphasis was on the “prophylactic use” of radiation, meaning its use after surgery to prevent recurrence.

The use of radiation to treat recurrent carcinoma of the breast is documented in these photographs. The first photograph was taken on November 1, 1901, and the second was taken on February 25, 1902. His case report reads as follows:

Mrs. X, aged 58, referred to me by Dr. C.C. Gratiot of Shullsburg, Wisconsin. (The patient was in the care of Christian Fenger, MD, in Passavant Hospital in July and August 1900.) Her present (July 1900) trouble began about 6 years ago, when the patient noticed a little hard lump on the inferior aspect of the left breast on the axillary side. There was scarcely perceptible enlargement of the hard area until about 2 years ago, when the patient noticed a more rapid enlargement. She then consulted Dr. Sheldon, of Madison, Wisconsin. At that time, the growth developed very fast and broke through the skin and formed an open sore…, which grew in dimensions until it is now the size of a silver dollar.

Dr. Sheldon advised an operation, whereupon she consulted Dr. Fenger. Dr. Fenger removed the breast with the axillary and supraclavicular glands in July 1900. A few months after [its] removal, the disease reappeared in the scar. She returned to Dr. Fenger last summer, but he found the case beyond operation. Her condition when she came to me, November 1, 1901, is shown in the accompanying photograph [Figure 1]…. There was a mass of carcinomatous tissue on the left side involving an area about a square foot. The nodules varied from the size of a hazelnut to that of a small apple. At the upper angle there were a couple of ulcers 2.5 to 3 inches in diameter…. 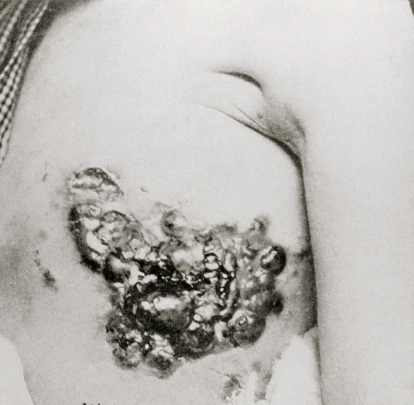 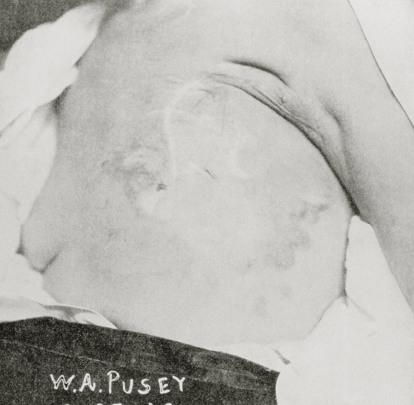 FIGURE 2: Posttreatment photo shows no evidence of carcinoma on the chest wall.

When she began treatment, she was suffering a great deal of pain… [and] was haggard and worn…. She was put under x-ray exposures on November 1, and the sittings were given daily for 2 months and every other day or less frequently after that. Two weeks after the treatments were begun…, her pain was gone, and she has had none since.

On January 17: There had been rapid subsidence of the tumor the last month…, There is at present only a slight superficial ulceration…and one small nodule…. The surface is free from infiltration and thickening and the redness has almost disappeared. The skin is considerably pigmented…. Improvement has continued since that time. The condition on February 27, 1902, is indicated…[in Figure 2]. There is no evidence of carcinoma left on the chest wall…. The first series of treatment was ended….

During May and June 1902, she had rather vigorous exposures, with the production of an acute dermatitis, which disappeared slowly…. From September to October she had vigorous exposures… [and] the lesions disappeared in all of the locations…. December 15, 1902: She remains in good condition without evidence of carcinoma.

[Dr. Pusey commented that this patient would have died about the time of her first treatment in November 1901.] This case tends to disprove the idea… hat after a certain amount of exposure carcinomatous tissue is no longer susceptible to the influence of x-rays…. In the spring of 1903 the disease recurred…involvement of the lung appeared, and the patient died [in] October 1903, refusing it, on the ground that, her children died during the preceding year, [and] she had no desire to make any further effort to prolong her life. ■