For relapsed or refractory multiple myeloma, daratumumab (Darzalex), combined with bortezomib (Velcade) and dexamethasone, reduced relapses by 61% in the phase III CASTOR study reported at the 2016 ASCO Annual Meeting.1

“The results are unprecedented in a randomized study comparing a novel treatment for relapsed/refractory myeloma. The addition of daratumumab to bortezomib/dexamethasone should be considered a new standard of care for relapsed/refractory multiple myeloma patients currently receiving bortezomib/dexamethasone alone,” said Antonio Palumbo, MD, of the University of Torino in Italy, who presented the findings at the ASCO plenary session.

In November 2015, the anti-CD38 monoclonal antibody daratumumab was approved by the U.S. Food and Drug Administration (FDA) for patients who have received at least three prior treatments. There has been high interest in using daratumumab earlier in relapsed patients. The international, randomized, controlled CASTOR trial evaluated the drug in patients with only one or more prior treatments.

Patients (n = 498) had received at least one prior line of therapy (a median of two) and could have received prior bortezomib but could not be refractory to it. They were randomized to eight cycles (every 3 weeks) of bortezomib (1.3 mg/m2 subcutaneously) plus dexamethasone (20 mg) for eight cycles, with or without daratumumab (16 mg/kg intravenously weekly in cycles one to three, day 1 of cycles four to eight, then every 4 weeks until progression). The primary endpoint was progression-free survival.

“By 3 months, we saw a difference in efficacy, already showing the advantage of the novel combination, and the trial was stopped,” said Dr. Palumbo. The early stopping of the trial is the reason for the short follow-up (median, 7.4 months). Patients in the control arm are now crossing over to receive daratumumab.

Treatment benefit with DVd was maintained across all clinically relevant subgroups. “A very high advantage was shown in patients with just one prior line of treatment, who had a 69% reduction in risk and a 1-year progression-free survival rate of 77.5% vs 29.4%,” he noted. “This shows early intervention is maximizing the efficacy of this combination.” 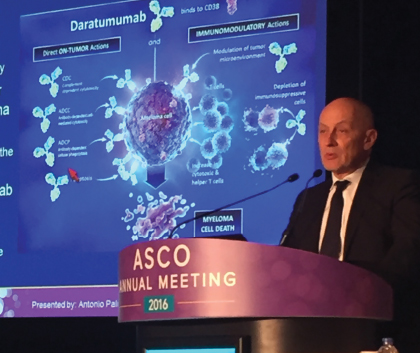 Antonio Palumbo, MD, of the University of Torino in Italy presented the results of the phase III CASTOR study during the plenary session of the 2016 ASCO Annual Meeting. Photo by Elizabeth Janetschek. Copyright 2016, The ASCO Post.

To accentuate the benefit of this triplet, Dr. Palumbo noted that hazard ratios for other novel agents in clinical trials in the same setting ranged from 0.53 (with carfilzomib [Kyprolis]) to 0.72 (with elotuzumab [Empliciti). “We are now at 0.39,” he emphasized. Overall survival data are clearly immature, “but we are already seeing a hazard ratio of 0.77,” added Dr. Palumbo.

DVd doubled both very good partial response rates and stringent complete response rates (Table 1). Median duration of response was not reached with DVd and was 7.9 months with Vd.

“The improvement in response rate is quite relevant, especially for profound cytoreduction, which moved from 9% to 19%,” Dr. Palumbo commented. “We saw a doubling in the rate of complete responses and very good partial responses and almost a tripling in complete responses. Minimal residual disease negativity was five times higher with daratumumab.”

The safety of DVd was consistent with the known safety profile of daratumumab and Vd. The most common adverse events for DVd and Vd, respectively, were thrombocytopenia (59% vs 44%), peripheral neuropathy (47% vs 38%), diarrhea (32% vs 22%), and anemia (26% vs 31%). A total of 7% and 9% of patients, respectively, discontinued the study due to a treatment-related adverse event.

“Daratumumab did not significantly increase any of the toxicities already present with Vd. The greater thrombocytopenia and neuropathy with the triplet were primarily a result of longer exposure to bortezomib, he explained.

In an ASCO press briefing, Dr. ­Palumbo noted that daratumumab “hits the most relevant tumor antigen for the myeloma plasma cell” and credits this action with the drug’s robust activity. Binding to CD38, the drug has direct “on-tumor” action and immunomodulatory action as well, he explained.

“The most specific and widely present antigen is CD28. It’s giving a high opportunity for cytotoxicity. The more antigen you have, the more antibodies can bind, and the better the ability of complement to activate the system,” he continued.

Although daratumumab is currently approved for patients with disease progression after three or more lines of therapy, Dr. ­Palumbo advocated that effective combinations such as this one are needed earlier in the treatment course. “It’s important to move this combination as fast as we can into the early phase of this disease, where there is a major advantage,” he commented. ■

Disclosure: Dr. Palumbo receives honoraria from and is a consultant for Janssen and Takeda.