Five years of aromatase inhibitor as upfront therapy or after tamoxifen is the current standard of care for postmenopausal women with early hormone receptor–positive breast cancer. A new trial suggests that extending aromatase inhibitor therapy with letrozole for an additional 5 years may improve disease-free survival and reduce the rate of new contralateral breast cancers in this group of postmenopausal women. An extra 5 years of letrozole did not, however, improve overall survival in the MA.17R trial, which was selected as one of the four plenary presentations at the 2016 ASCO Annual Meeting.1

“This is the first large randomized study to show the benefit of extending aromatase inhibitor therapy beyond 5 years. An additional 5 years of letrozole resulted in a 34% reduction in the risk of recurrence, with no worsening of quality of life. No new side effects or emergent symptoms were reported with extending letrozole for another 5 years. Quality of life was not compromised, and this is an important consideration in these women,” said lead author Paul E. Goss, MD, Director of Breast Cancer Research at Massachusetts General Hospital and Professor at Harvard Medical School in Boston.

Results of the MA.17R trial were published in The New England Journal of Medicine2 to coincide with the presentation at the 2016 ASCO Annual Meeting.

Several experts made it clear that these results are not a mandate to keep all postmenopausal women with hormone receptor–positive breast cancer on lifelong endocrine therapy. They agreed that the data should be used in discussions with patients, especially those who are high risk and who can tolerate the side effects of long-term use of aromatase inhibitors.

Nevertheless, Dr. Goss commented to The ASCO Post that it is not the role of “experts” on the spot to make clinical guideline decisions about the applicability of new treatments, but rather, this is the role of international committees.

MA.17R included 1,918 patients with hormone receptor–positive early breast cancer who had already taken about 5 years of letrozole and were disease-free. Virtually all the patients enrolled in the trial had not had a break of longer than 6 months while on aromatase inhibitor therapy. They were randomized 1:1 to 5 additional years of treatment with letrozole once daily or placebo once daily. 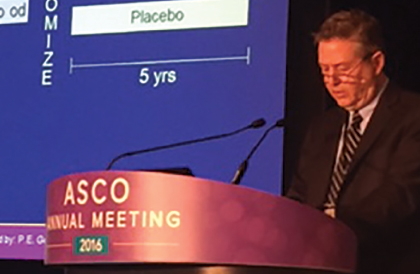 A majority of women in both arms had been treated with tamoxifen for 5 years, and these women were 10 years out from their diagnosis. The rate of adherence to the study regimen was 62.5% in the letrozole group and 62.3% in placebo recipients.

At a median follow-up of 6.3 years, a total of 165 events (disease recurrence or contralateral breast cancer) were reported: 67 in the letrozole group and 98 in the placebo group. A total of 200 deaths were reported, 100 in each group.

The rate of 5-year disease-free survival was significantly improved in the extended letrozole group vs placebo: 95% vs 91%, respectively (P = .01), representing a 34% reduction. This benefit was independent of nodal status, prior adjuvant chemotherapy, time since the last dose of an aromatase inhibitor, and duration of prior therapy with tamoxifen or an aromatase inhibitor.

The rate of contralateral breast cancer was 1.4% with letrozole and 3.2% with placebo, a 58% reduction that was statistically significant (P = .007). The most common site of distant recurrence was visceral, Dr. Goss said.

Most toxicities were similar in the two groups. Letrozole-treated women had more frequent reports of bone pain, bone fracture, and new-onset osteoporosis. There were few treatment-related discontinuations (5.4% with letrozole vs 3.7% with placebo).

Bone fracture occurred in 133 letrozole-treated women and 88 placeb-treated women. The majority of women who sustained a bone fracture during the study were taking bone-protective agents such as bisphosphates, calcium supplements, and vitamin D supplements. These differences in bone-related effects are a consideration when contemplating longer-term aromatase inhibitor therapy, Dr. Goss noted. He added that further bone analyses (looking at factors such as age and on-treatment annual bone density trends) would be conducted, in order to better predict which patients are specifically vulnerable to clinical fractures.

No worsening of quality of life was seen in the letrozole group compared with placebo according to two measures of quality of life: Short-Form 36 Health Survey (SF-36) and Menopause-Specific Quality-of-Life Questionnaire (MENQOL). Only one of eight subscales of the SF-36 found a small difference favoring placebo (ie, role-function physical subscale). No difference was observed between the letrozole and placebo groups in any of the four domains on the MENQOL.

“It is very reassuring for women who want a longer duration of aromatase inhibitor therapy that they can expect a preserved quality of life,” said Julie Lemieux, MD, who reported quality-of-life data from MA.17R at the press conference at the ASCO Annual Meeting.

Dr. Goss concluded, “Unlike many anticancer therapies, aromatase inhibitors are readily accessible around the world, and therefore, our results will further improve the outcome of many women with breast cancer. ■

Why Do Men Face a Higher Risk of Most Types of Cancer Than Women?