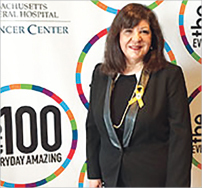 Margaret Foti, PhD, MD (hc), CEO of the American Association for Cancer Research (AACR), was honored for her “dedication and commitment to solving cancer through research” and for her “passionate advocacy for increased federal funding for cancer research and biomedical science,” at Massachusetts General Hospital Cancer Center’s eighth annual “One Hundred” gala, held on May 26 in Boston.

Massachusetts General Hospital Cancer Center established the “one hundred” as an awareness and fundraising initiative that celebrates hope in the cancer community. Each year, 100 individuals and groups—caregivers, researchers, philanthropists, advocates, and volunteers from around the world—whose commitment to the fight against cancer inspires others to take action are selected through a public nomination process and celebrated at a spring gala.

“I am deeply honored to be recognized by Massachusetts General Hospital Cancer Center as a 2015 honoree of the One Hundred,” said Dr. Foti. “It is really humbling for me to share this recognition with so many inspiring women, men, children, and organizations that have made remarkable contributions to this important cause. The personal stories of the one hundred honorees are a testament to the courage and strength of purpose shown by those who have faced a cancer diagnosis and by those who have provided vital support to others in their fight against cancer. Working collaboratively with individuals and organizations like these is a cornerstone of the AACR’s mission, because if we are to accelerate the pace of progress against the insidious group of diseases we call cancer, we must bring together people and organizations from around the globe.”

During Dr. Foti’s tenure as CEO of the AACR, her leadership has been instrumental in increasing the organization’s membership, which has grown from about 3,000 to 35,000 laboratory, translational, and clinical researchers; population scientists; other health-care professionals; and cancer advocates, residing in 101 countries.

In addition, the organization’s comprehensive program of national and international conferences and educational workshops has flourished, with attendance at the AACR Annual Meeting 2015 reaching a record-breaking high of nearly 19,300. ■