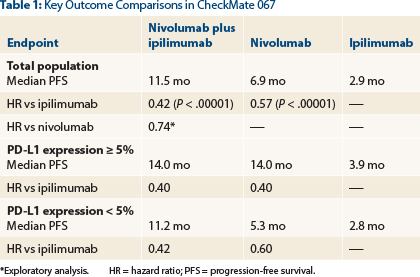 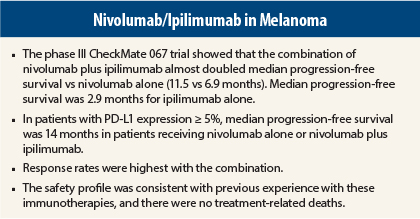 PD-L1 expression is not a binary discriminator of absolute benefit, but this trial is a first effort to try to introduce a precision aspect to immunotherapy.

The findings from CheckMate 067, the first phase III trial to evaluate the combination of anti–PD-1 and anti–CTLA-4 agents, were presented at the Plenary Session of the 2015 ASCO Annual Meeting by Jedd Wolchok, MD, PhD, Chief of the Melanoma and Immunotherapeutics Service at Memorial Sloan Kettering Cancer Center, New York.

“PD-L1 expression is not a binary discriminator of absolute benefit, but this trial is a first effort to try to introduce a precision aspect to immunotherapy. In this study, we see it’s a way to initiate meaningful conversations between patients and clinicians about whether a combination [nivolumab/ipilimumab] is the right thing for them, vs nivolumab alone,” he told The ASCO Post.

Some experts, however, were more tempered in their impression of PD-L1 as a potential biomarker. Study discussant Michael B. Atkins, MD, Deputy Director of the Lombardi Cancer Center at Georgetown University, a key figure in the PD-1 research story, said much more work is needed before involving PD-L1 expression in patient selection.

“Even with a high threshold for positivity, which greatly enriched the biomarker-positive group in this trial, the utility of PD-L1 expression for selecting patients for nivolumab monotherapy, to me, is still unconvincing,” he said.

The study’s coprimary endpoint was progression-free survival for nivolumab alone, and for nivolumab/ipilimumab, vs ipilimumab. Results for overall survival will not be reported until after 22 months of follow-up.

Steven O’Day, MD, speaking at a press briefing as an ASCO expert in melanoma, commented, “Right now, in PD-L1–positive patients, we can be fairly reassured that their progression-free survival will be very similar” whether they receive a single-agent anti–PD-1 agent or a combined immunotherapy.

Deaths were reduced by 43% to 58% with the PD-1 inhibitor on board, and in a descriptive analysis, the combination reduced deaths by 26% over nivolumab monotherapy.

Objective response rates in the intent-to-treat population were 57.6% for the combination, 43.7% with nivolu­mab alone, and 19.0% for ipilimumab alone; for both nivolumab-containing arms, these differences were statistically significant vs ipilimumab (P < .0001). Complete responses were observed in 11.5%, 8.9%, and 2.2%, ­respectively.

“Characteristic of any immunotherapy,” he said, the duration of response in all three arms was not yet reached at a minimum follow-up of 9 months. The median change in tumor burden was −51.9% with the combination, −34.5% with nivolumab alone, and +5.9% with ipilimumab alone.

Dr. Wolchok emphasized that the combination proved to be relatively well tolerated, as physicians were able to manage the common immune-related toxicities. Grade 3/4 treatment-related adverse events, which were consistent with previous reports, occurred in 55% of the combination arm, 16.3% of the nivolumab arm, and 27.3% of the ipilimumab arm. Most adverse events were “managed and resolved with established safety guidelines,” he noted.

“We had no drug-related deaths in the combination arm. This is a very important point, because the trial was conducted in 137 sites globally. Safety guidelines were put into place so that physicians in a variety of venues were able to handle the side effects,” he said.

Treatment-related discontinuations were seen in 36.4% of the combination arm, but two-thirds of patients with immune-related adverse events developed responses, half of which occurred after the treatment was stopped.

“Based upon the available evidence,” Dr. Wolchok concluded, “the combination represents a means to improve outcomes vs nivolumab alone, particularly for patients whose tumors have less than 5% PD-L1 expression.” ■

Disclosures:  Dr. Wolchok reported consulting or advisory roles with Bristol-Myers Squibb, Merck, MedImmune, Ziopharm Oncology, Polynoma, Polaris, Jounce Therapeutics, and GlaxoSmithKline; travel, accommodations, and expenses from Bristol-Myers Squibb; patents, royalties, other intellectual property as a coinventor on an issued patent for DNA vaccines for the treatment of cancer in companion animals; stock and other ownership interest with Potenza Therapeutics and Vesuvius Pharmaceuticals; honoraria from EMD Serono and Janssen Oncology; and research funding from Bristol-Myers Squibb, MedImmune, GlaxoSmithKline, and Merck.

Michael B. Atkins, MD, Deputy Director, Lombardi Cancer Center of Georgetown University, Washington, DC, discussed CheckMate 067 at the Plenary Session. Pending overall survival data, he concluded, “Nivolumab and nivolumab plus ipilimumab are superior to ipilimumab. These treatments (along with...

Results From the Checkmate 067 Trial on Nivolumab, Ipilimumab, and Advanced Melanoma