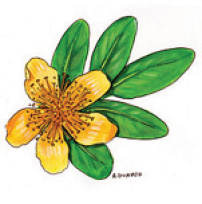 The ASCO Post’s Integrative Oncology series is intended to facilitate the availability of evidence-based information on integrative and complementary therapies commonly used by patients with cancer. We chose St. John’s wort for this issue because of its popularity among cancer patients.

A perennial herb indigenous to Europe, West Asia, and North Africa, St. John’s wort has a centuries-long history as a remedy to treat wounds, headaches, kidney problems, nerve disorders, and melancholia. Brought to the United States by the colonists, it grows in many areas of the country.

Today, St. John’s wort is used to alleviate anxiety and depression, as well as for sleep disorders. It is available in health food stores and online in the form of capsules, tablets, liquid extracts, tinctures, and teas. It is also a common ingredient in skin lotions.

Interactions between St. John’s wort and prescription drugs, including chemotherapeutic agents, are well documented in the literature.

Among several bioactive compounds discovered, hyperforin and hypericin are thought to be responsible for the beneficial effects of St. John’s wort. In vitro and in vivo experiments with the herb have shown neuroprotective effects1 and the ability to relieve neuropathic pain in a rat model.2

Current evidence indicates that St. John’s wort may be as effective as selective serotonin-reuptake inhibitors in treating mild to moderate depression.3 It is seen as a cost-effective alternative to generic antidepressants.4 Studies have shown that the effects of St. John’s wort are comparable to those of paroxetine5 and other selective serotonin-reuptake inhibitors6 in controlling moderate to severe depression. It is well tolerated, with sustained reductions in depression following continued use in those with acute moderate depression.7 However, analyses of all types of depression yielded inconsistent data,8,9 and a randomized trial found St. John’s wort ineffective in treating minor depression.10

A few studies support its efficacy in controlling premenstrual syndrome11 and vasomotor symptoms in peri- and postmenopausal women.12

Cardiovascular issues: Long-term use of St. John’s wort was identified as a potential contributor to cardiovascular collapse during anesthesia in a patient.19

Irinotecan: Due to changes in hepatic metabolism caused by St. John’s wort, levels of SN-38, a metabolite of the chemotherapy agent irinotecan, may be lowered by as much as 40% for up to 3 weeks following discontinuation of St. John’s wort.22

Tricyclic antidepressants: An increased serotonergic effect and possible serotonin syndrome is seen when St. John’s wort is combined with nefazodone, amitriptyline, or imipramine. Possible reduction in efficacy of antidepressants may be due to metabolism changes induced by St. John’s wort.13

UGT (Uridine 5’-diphospho-glucuronosyltransferase) substrates: St. John’s wort modulates UGT enzymes in vitro, and can increase the side effects of drugs metabolized by them.26 ■

The Integrative Medicine Service at Memorial Sloan Kettering Cancer Center developed and maintains a free website—About Herbs (www.mskcc.org/aboutherbs)—that provides objective and unbiased information about herbs, vitamins, minerals, and other dietary supplements, and unproved anticancer treatments. Each of the 269 and growing number of entries offer health-care professional and patient versions, and entries are regularly updated with the latest research findings.