Fixed-duration ibrutinib and venetoclax as a first-line treatment yielded superior outcomes compared with chlorambucil plus obinutuzumab in patients with chronic lymphocytic leukemia (CLL), based on the primary analysis of the phase III GLOW trial presented during the European Hematology Association (EHA) 2021 Virtual Congress.1

“We now have a good treatment option [ibrutinib plus venetoclax] for both fit and unfit patients [with CLL].”
— Arnon Kater, MD, PhD

The study met its primary endpoint, reducing the risk of disease progression or death by 78%. Median progression-free survival was not reached with ibrutinib/venetoclax and was 21 months in the control arm (hazard ratio [HR] = 0.216; P < .0001), Dr. Kater reported.

The press briefing moderator and EHA President-Elect Elizabeth Macintyre, MD, Head of Biological Hematology at the Institut Necker Enfants-Malades, Paris, commented: “It’s impressive to see how this disease can now be managed…. Times are changing, and this is an exciting evolution.”

Rationale for the Regimen

The two drugs have distinct and complementary modes of action that work synergistically. Ibrutinib mobilizes CLL cells out of protective lymphoid niches, inhibits their proliferation, and sensitizes CLL cells to BCL2 inhibition by venetoclax, thus accelerating apoptotic killing. Given together, the two drugs can eliminate resting and dividing CLL cell subpopulations.

“The implication is that this combination has the ability to eliminate CLL cells across all compartments…. And the expectation was that combining ibrutinib with venetoclax would lead to deeper, durable responses and enable treatment-free periods,” Dr. Kater explained.

The current study examined fixed-duration ibrutinib plus venetoclax in older or unfit adults with previously untreated CLL. Recently reported were results of this regimen in younger, more fit patients in the phase II CAPTIVATE study, where treatment led to a 2-year progression-free survival rate of 95%.2

The phaseIII GLOW trial evaluated fixed-duration ibrutinib plus venetoclax compared with chlorambucil plus obinutuzumab in 211 patients (median age, 71 years) with previously untreated CLL. Patients were ≥ age 65 or < age 65 with a Cumulative Illness Rating Scale (CIRS) score > 6 or creatinine clearance < 70 mL/min. (The CIRS is used to assess comorbidity in patients with CLL, with illness or impairment in any of 14 organs or body systems being assigned a rating from 1 to 4.) Exclusion criteria included del(17p) and known TP53 mutations. The primary endpoint was progression-free survival by independent review.

After stratification by IGHV gene somatic hypermutation status and the presence of del(11q), patients were randomly assigned 1:1 to receive one of the following treatments:

Upon disease progression, patients in both arms could be offered single-agent ibrutinib. The arms were balanced except for the fact that the control arm had more patients with elevated lactate dehydrogenase (49% vs 33%).

After a median follow-up of 28 months, by independent review, the median progression-free survival was not reached with ibrutinib plus venetoclax and was 21 months in the control arm (HR = 0.216; P < .0001). Results of the investigator assessment were consistent (HR = 0.207; P < .0001), and a similar benefit was seen across key prespecified subgroups, Dr. Kater reported.

Patients who were treated with ibrutinib plus venetoclax also had deeper and more durable responses, the investigators reported. The rate of complete response plus complete response with incomplete bone marrow recovery was 38.7% vs 11.4% (P < .0001), in favor of ibrutinib plus venetoclax. Furthermore, among responders, 90% of the experimental arm and 40% of the control arm sustained their responses 24 months later.

Treatment with ibrutinib plus venetoclax also led to significantly higher rates of undetectable MRD compared with chlorambucil plus obinutuzumab, as assessed 3 months after the end of treatment in the bone marrow (51.9% vs 17.1%; P < .0001) and peripheral blood (54.7% vs 39.0%; P = .0259). Several other undetectable MRD outcomes were improved with the newer regimen (Table 1), including the rate of sustained undetectable MRD. 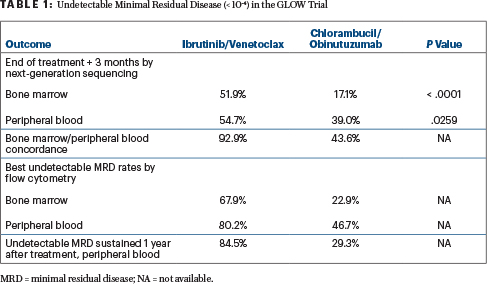 “Also, the risk of requiring second-line therapy was reduced by 86% with first-line ibrutinib/venetoclax. Four patients in this arm initiated subsequent anticancer therapy vs 27 in the chlorambucil/obinutuzumab arm,” Dr. Kater noted.

Overall survival data are immature, with 11 deaths in the ibrutinib/venetoclax arm and 12 in the chlorambucil/obinutuzumab arm. Most deaths were due to infections and cardiac events.

“The efficacy looks very promising, but we also have to be concerned about the tolerability profile with any new combinations, especially in the older age group,” Dr. Kater continued. In this regard, the safety profiles for both regimens were predictable, given the known toxicities of all these drugs in older patients with CLL who have comorbidities. Almost 80% of patients given ibrutinib plus venetoclax received at least 12 months of treatment.

The rate of grade ≥ 3 adverse events was similar—75.5% in the experimental arm and 69.5% in the control arm—although patients given ibrutinib plus venetoclax had more than double the treatment exposure: 13.8 months vs 5.1 month. Serious adverse events were more common with ibrutinib plus venetoclax, including infections (12.3% vs 8.6%) and atrial fibrillation (6.6% vs 0%), but none of the patients in the investigational arm developed tumor-lysis syndrome (vs 5.7% of controls), likely due to the ibrutinib lead-in period, he said.

“If you take these GLOW data together with CAPTIVATE, we now have experience across a broad spectrum of more than 400 patients with CLL treated with ibrutinib plus venetoclax in the first-line setting. I think we now have a good treatment option for both fit and unfit patients,” Dr. Kater concluded.

DISCLOSURE: Dr. Kater has served as a consultant or advisor to AbbVie/Genentech, AstraZeneca, Bristol Myers Squibb/Celgene, Janssen Oncology, and Lava Therapeutics; has received research funding from AbbVie, AstraZeneca, Bristol Myers Squibb, Janssen Oncology, and Roche/Genentech; and has been reimbursed for travel, accommodations, or other expenses by Acerta Pharma/AstraZeneca and Roche/Genentech. Dr. Macintyre reported no conflicts of interest.

In the phase III GLOW trial, the all-oral regimen of fixed-duration ibrutinib plus venetoclax as first-line treatment for older or unfit patients with chronic lymphocytic leukemia (CLL) showed superior efficacy compared with chlorambucil and obinutuzumab.1Kostas Stamatopoulos, MD, PhD, of the...