The ASCO Post’s Integrative Oncology series is intended to facilitate the availability of evidence-based information on integrative and complementary therapies sometimes used by patients with cancer. In this installment, Eugenie Spiguel, MSN, ANP-BC, and Jyothirmai Gubili, MS, focus on American ginseng because of its popularity as a strength- and stamina-boosting herb.

American ginseng is a perennial herb with a history of medicinal use by Native Americans to treat headaches, fever, indigestion, and infertility. Following its introduction to China more than three centuries ago, the herb continues to be used in herbal remedies for a variety of ailments. American ginseng is also promoted in supplemental forms to boost athletic performance, strength, and stamina, as well as to treat diabetes and cancer. 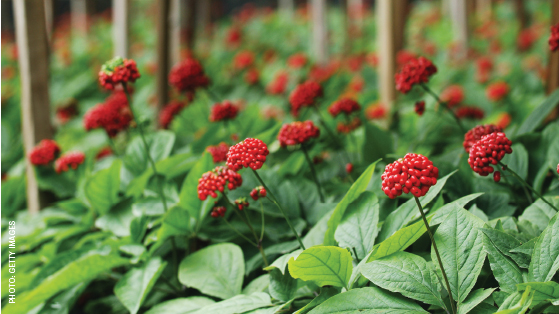 Preliminary findings suggest that American ginseng may have positive effects on working memory in young7 and middle-aged8 healthy adults, as well as in patients with schizophrenia.9

American ginseng may also have benefits in oncology settings. In a large population-based study of 1,455 patients with breast cancer, ginseng use was positively correlated with quality-of-life scores, and users had a significantly reduced risk of death. The adjusted hazard ratios associated with ginseng use were 0.71 (95% CI = 0.52–0.98) for total mortality, and 0.70 (95% CI = 0.53–0.93) for disease-specific mortality/recurrence.10

In a multisite study, 364 participants with diverse cancer types experiencing cancer-related fatigue were randomly assigned to receive 2,000 mg of American ginseng or placebo daily for 8 weeks. The primary outcome was measured by the Multi­dimensional Fatigue Symptom Inventory–Short Form (MFSI-SF). Compared to baseline, at 4 weeks, the MFSI-SF score was 14.4 (SD = 27.1) in the ginseng group vs 8.2 (SD = 24.8) in the placebo arm (P = .07).

Physicians should be aware of the hypoglycemic effects of American ginseng and its potential for interaction with certain prescription drugs.

Furthermore, the change in score at 8 weeks was 20 (SD = 27) for the ginseng group vs 10.3 (SD = 26.1) for those on placebo, a statistically significant difference (P = .003). Interestingly, benefits were greater in patients receiving active cancer treatment compared to those who finished their treatments.11

However, in a smaller study involving 32 patients with head and neck cancer randomly assigned to 1,000 mg of American ginseng or placebo daily for 8 weeks, the mean of the differences in fatigue scores between baseline and 8 weeks did not reach statistical significance.12

Further research is needed to determine the clinical effects of ginseng.

Cytochrome P450 (CYP) 3A4 substrates: Some ginsenosides can induce CYP3A4 and may affect the intracellular levels of drugs metabolized by this enzyme.14,15 But the clinical significance of this interaction is not known.

American ginseng should not be confused with Panax ginseng or Siberian ginseng, which have different medicinal properties. American ginseng can be helpful in improving cancer-related fatigue, which is a common symptom and can be very distressing for patients. Fatigue is particularly prevalent in those undergoing treatment; therefore, care should be taken to avoid any herb-drug interactions.

Ms. Spiguel is a Nurse Practitioner and Ms. Gubili is an ­Editor, both at the Integrative Medicine Service, Memorial Sloan Kettering Cancer Center, New York.