High-risk disease was defined as patients with stage III disease with lactate dehydrogenase (LDH) levels at least two times the upper limit of normal (ULN) or stage IV disease including patients with bone marrow and/or central nervous system (CNS) involvement, as defined previously by the FAB/LMB96 trial.1-4 The current study was based on our prior phase II trial of the investigation of dose-dense rituximab administration combined with the same two FAB/LMB96 chemotherapy backbones in the same population of patients. The results of the current trial (Inter-B-NHL 2010) report event-free survival and other expected results in the experimental arm similar to those shown in our previous phase II trial.5,6

The authors of the Inter-B-NHL 2010 trial did not discuss the importance of the dose-dense administration of rituximab, although this may be of critical importance in patients with bulky and/or disseminated disease, such as occurs in children and adolescents with high-risk mature Burkitt lymphoma/leukemia, as described in adults with diffuse large B-cell lymphoma (DLBCL) by Pfreundschuh et al.7,8 Our group previously reported that two doses of rituximab administered 48 hours apart (375 mg/m2/dose; dose-dense) during both chemoimmunotherapy induction cycles resulted in higher peak and trough levels of rituximab, was well tolerated, and appeared to significantly increase event-free survival compared with historical control trials that evaluated FAB/LMB96 chemotherapy alone.5-7 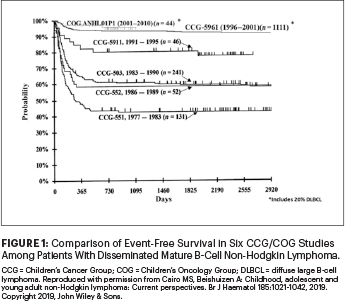 In the past 40 years, there has been dramatic improvement in the prognosis (event-free survival) in children and adolescents with disseminated (high-risk) mature B-NHL. As illustrated in Figure 1, the Children’s Cancer Group (CCG) and subsequently COG demonstrated a steady increase in event-free survival in this group of patients while reducing the length of therapy from 2.5 years to 3 to 6 months, eliminating both local and CNS radiotherapy, reducing total doses of cyclophosphamide and doxorubicin, and more recently incorporating  targeted monoclonal rituximab immunotherapy.2-6,9-14

The results of this international study, confirming our COG pilot studies, firmly establish that the addition of dose-dense rituximab to FAB/LMB96 chemotherapy backbones represents the “standard” approach in children and adolescents with high-risk mature B-NHL. We eagerly await the results of additional studies comparing one vs six doses of rituximab in combination with the Berlin-Frankfurt-Munich (BFM) chemotherapy backbone (ClinicalTrials.gov identifier NCT03200671).15

It is unclear why the risk of grade III or IV mucositis was significantly increased in the Inter-B-NHL 2010 study (back to an incidence of 75% to 80%) despite utilizing the shorter infusion of doxorubicin (Table 1). This higher rate of mucositis will likely contribute to both prolonged hospitalization and grade III or IV infections.

Future investigations in childhood and adolescent mature B-NHL should include assessments of the role of rituximab in favorable-risk patients (stage I/II and low LDH stage III), optimal therapeutic approaches in patients with relapsed or refractory disease, and novel approaches for patients with high-risk and/or unusual subtypes of mature B-NHL. We have recently demonstrated the safe and effective reduction of doxorubicin to a total dose of 50 mg/m2 with the addition of six doses of dose-dense rituximab to the group B FAB/LMB96 backbone and demonstrated a 100% event-free survival in 25 consecutive patients.16

Most recently, we reported the safety and pharmacokinetics of adding the Bruton’s tyrosine kinase inhibitor ibrutinib to two common chemotherapy reinduction chemotherapy backbones.22 Furthermore, rituximab-containing FAB/LMB96 therapy is not only difficult to administer in lower socioeconomic countries, but the toxicities are difficult to manage without highly intensified supportive care, and novel, strategic approaches are required in this unique population as well.23 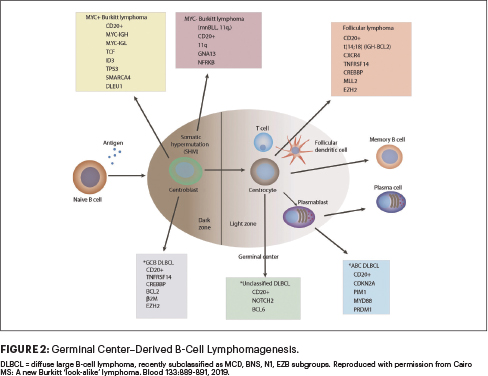 Additionally, novel approaches are required for patients with rarer subtypes of mature B-NHL, including those with primary mediastinal B-cell lymphoma, activated B-cell DLBCL, MYC-negative Burkitt lymphoma, among others within germinal cell–derived B-cell lymphoma populations (Figure 2).24-26 Additionally, the impact of minimal residual disease and high-risk cytogenetics on event-free survival is not addressed in the Inter-B-NHL 2010 trial and will need to be addressed in the future.27-29

Although the results of the Inter-B-NHL 2010 study demonstrated a significant improvement in event-free survival in children and adolescents with high-risk mature B-NHL, it has taken more than 18 years since the landmark report of Coiffier et al showed a significant benefit in event-free survival with rituximab plus CHOP (cyclophosphamide, doxorubicin,  vincristine,  prednisone) vs CHOP alone in elderly patients with DLBCL. It is imperative that we form collaborations within academic communities, pediatric oncology cooperative groups, governmental cancer programs, the pharmaceutical industry, and governmental regulatory agencies to identify a more accelerated platform for drug development in children and adolescents. Our goal should be to more rapidly complete the required phase III trials, so children and adolescents “don’t have to wait another 18 years” before a new standard of care is established.9,30

17. Cairo M, et al: Overall survival of children and adolescents with mature B cell non-Hodgkin lymphoma who had refractory or relapsed disease during or after treatment with FAB/LMB 96. Br J Haematol 182:859-869, 2018.

18. Jourdain A, et al: Outcome of and prognostic factors for relapse in children and adolescents with mature B-cell lymphoma and leukemia treated in three consecutive prospective ‘Lymphomes Malins B’ protocols. Haematologica 100:810-817, 2015.