Physicians and the Threat of Nuclear War

The Hippocratic Oath calls on physicians to “use treatment to help the sick according to my ability and judgment,” but not all versions of the oath call on us to prevent disease. Here we urge our colleagues to acknowledge that additional mandate and renew their commitment to preventing what could be a man-made catastrophe of nonpareil proportion.

Physicians are tasked with many distractions, such as adapting to Gordian knot–like electronic medical records, accommodating increased pressures from payers, and adjusting to chronophagic regulations that limit interactions with patients. Much of our effort seems to be geared primarily to serving a $3 trillion health-care industry. Yet we must add another distraction to these hurdles: our responsibility to reduce the likelihood of nuclear war.

Almost 60 years ago, Ervin and co-workers (including coauthor DGN) described the potential medical consequences of exploding a 20-megaton (MT) thermonuclear weapon over Boston.1 They estimated about 2.25 million deaths. Accompanying articles discussed the impossibility of a medical response to such an event and physicians’ responsibility to do everything possible to prevent such a catastrophe.

Physicians responded to this alarm by creating the Physicians for Social Responsibility and eventually the International Physicians for the Prevention of Nuclear War (IPPNW), a nongovernmental organization with representatives from 63 countries, which received the 1985 Nobel Peace Prize. More recently, coauthor RPG (with James O. Armitage, MD, FASCO) published an article on medical preparedness for nuclear terrorism, one aspect of which was to consider the use of a nuclear weapon by terrorists or an adversary state.2

The Cold War is likely a distant memory to many readers of The ASCO Post, and others may be too young to recall the nuclear threat under which American and Soviet citizens lived for many years. The Cold War is over, but the potential for risk of a nuclear war is not. During and after the end of the Cold War, the United States and Soviet Union (now the Russian Federation) negotiated a series of treaties designed to reduce the threat of nuclear war including the Nuclear Non-Proliferation Treaty, Strategic Arms Limitation Talks (SALT I and II), Anti-Ballistic Missile Treaty (ABM), Strategic Arms Reduction Treaty (START I, II, III, and NEW START), Strategic Offensive Reductions Treaty (SORT), Intermediate-Range Nuclear Forces Treaty (INF), and the Presidential Nuclear Initiatives.

Some but not all of these treaties were ratified by the United States and/or Soviet/Russian governments. Others never took effect, were terminated, or expired. Sometimes there has been compliance with terms of these treaties even when they were not ratified by either government. These treaties had several goals, including (1) reducing the numbers of nuclear warheads; (2) reducing delivery systems and vehicles; (3) banning strategic missile defenses; and (4) eliminating ground-based ballistic and cruise missiles with ranges of 500 to 5,500 km (so-called tactical nuclear weapons).

Some notable successes can be celebrated. For example, the United States and Russia now each deploy about 1,600 strategic nuclear warheads, down from a combined stockpile total of about 64,500 at the height of the Cold War, a greater than 95% reduction. Other weapons are retired or remain in the nuclear stockpile but are not deployed.

Importantly, these nuclear-capable countries have effective tactical missile delivery systems, and many have or will soon have strategic missile delivery systems. A map of nuclear-armed states is shown in Figure 1. Several of these nations never signed (Israel, India, Pakistan) or withdrew (North Korea) from the Nuclear Non-Proliferation Treaty. Several other nations (Iran, Libya, Syria) are suspected of being in violation it.3 Overall, however, the treaty has been successful in curbing the spread of nuclear weapons.

One might wonder whether this dramatic reduction in U.S. and Russian nuclear warheads means the danger of a nuclear war is substantially lessened. Unfortunately, no. To the contrary, the risk of a nuclear war may be greater than ever. In 1995, the Doomsday Clock of the Bulletin of the Atomic Scientists stood at 12 minutes before midnight. Today, it’s at 2 minutes, an almost 85% increased risk, despite a greater than 95% reduction in nuclear warheads. How did this happen, and what are our responsibilities as physicians to respond?

Several recent disturbing events dramatically increase the likelihood of a nuclear conflict. On May 8, 2018, the United States unilaterally withdrew from the Joint Comprehensive Plan of Action (JCPOA), unofficially known as the Iran Nuclear Deal. The other signatories (Iran, China, France, Russia, Germany, and the European Union [EU]) remain committed. Although there are no data proving Iran has violated the agreement, it recently indicated its intention to restart uranium enrichment because of strict new economic sanctions imposed by the United States. More disturbingly, after years of downsizing, the United States, Russia, and most other nuclear states have committed to upgrading their nuclear weapons capabilities.

RESOURCES FOR INFORMATION ABOUT RADIATION EXPOSURE AND INJURY

For the past several years, the United States and Russia have accused each other of violating the Intermediate-Range Nuclear Forces Treaty. One area of contention is Russia’s transfer of sea-based cruise missiles with a range > 500 km to trucks. Such missile systems could strike a member state of the North Atlantic Treaty Organization (NATO). On February 2, 2019, the United States gave official notice of withdrawal from the treaty in 6 months if Russia fails to come into compliance. Russia has responded by giving similar notice of withdrawal.

Another risk is signaled by the continued development of nuclear weapons and tactical and strategic missiles by North Korea.

Of further concern are China’s increase in nuclear weapons (currently about 250) and strategic missile delivery systems and the development of tactical delivery vehicles by Pakistan and India. The recent conflict over Kashmir between India and Pakistan has brought two nuclear-armed nations into active conflict. Pakistan has now developed tactical nuclear weapons and has put these under the control of local field commanders rather than a central authority. 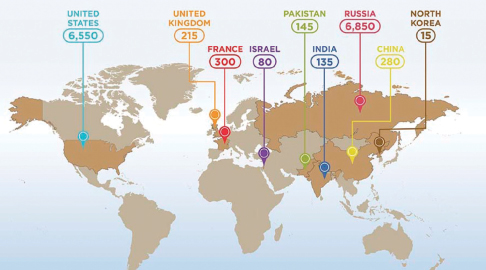 And that’s not all. Russia recently developed a nuclear-powered drone torpedo (Kanyon UUV) with a 100-MT warhead. For comparison, the largest nuclear bomb built by the United States (the B-41) was 25 MT, the largest tested by the United States (Castle Bravo test) was 15 MT, and the largest in the current U.S. arsenal is 1.2 MT. The largest built and tested by the Soviet Union was the Tsar Bomba at 50 MT. Exploding the Kanyon UUV near a coastal city would cause a 100 meter–high radioactive tsunami wave. The presumed strategy would be to threaten to use it against a city like Boston or New York if the United States tried to retaliate against a Soviet conventional or nuclear attack on a NATO member state.

Readers can appreciate the force of these weapons by recalling that the two A-bombs detonated on Hiroshima and Nagasaki in 1945 had a combined trinitrotoluene energy of 35 kilotons (KT)—3,000-fold less powerful than the Kanyon UUV—and killed 120,000 to 250,000 people.

Although the focus of most nuclear weapons treaties is on strategic nuclear weapons, it is a mistake to ignore the threat posed by tactical (nonstrategic) nuclear weapons with shorter-range delivery systems and lower-yield warheads, typically < 20 KT, similar to “Fat Man,” the Nagasaki bomb that killed 60,000 to 80,000 people. Designating these weapons “low yield” seems a bit of a euphemism.

The United States and Russia combined have > 1,000 tactical nuclear weapons; many are deployed. As noted earlier, Russia has begun transferring ship-based cruise missiles to trucks (the basis of the U.S. claim of an INF treaty violation).

The U.S. Department of Defense reviews American nuclear strategy every few years. Recommendations in the 2018 Nuclear Posture Review will surprise those who may have assumed that the United States—the only nation to explode a nuclear weapon on a civilian population—would now use such weapons only in response to a nuclear attack. Instead, the review rejects a policy whereby nuclear weapons would be used to deter only nuclear attacks. Moreover, it rejects a no-first-use policy, whereby nuclear weapons would be used only in retaliation to a nuclear strike.

ADDITIONAL RESOURCES ABOUT MEDICAL PREPAREDNESS FOR NUCLEAR DISASTER FROM THE LITERATURE

The Nuclear Posture Review also emphasizes that the United States will not seek ratification of the Comprehensive Nuclear Test Ban Treaty (ratified by Russia), which prohibits nuclear explosions in all environments. Most importantly, in our opinion, the review rejects the UN-sponsored Treaty on the Prohibition of Nuclear Weapons, an attempt to eliminate nuclear weapons, as being unrealistic in today’s political and social environment. Sadly, this may be so.

Finally, START III is scheduled to expire in 2021, and neither the United States nor Russia seems keen to negotiate an extension. The sum of all these considerations is that in the near future, we may be back to where we were 50 years ago, with no nuclear arms control treaties.

It’s reasonable to ask what any of this has to do with our responsibility as physicians. There are several answers. First, as respected members of society, we need to be aware of the ongoing, probably increasing threat of the use of nuclear weapons and of a nuclear war.

Second, we need to be certain politicians and the military understand that despite substantial recent medical advances such as the development of molecularly cloned hematopoietic growth factors and hematopoietic transplants to rescue people from radiation-induced bone marrow damage, there is no possible effective medical response to the detonation of a strategic or even a tactical nuclear weapon. This is not to say that we should not make plans to deal with lower-level radiation and nuclear incidents and accidents, but we must not be lulled into thinking these measures can be upgraded to deal with the medical consequences of a nuclear war.

Third, we must educate (or reeducate) ourselves on several of the nuclear risks we discuss above. Fourth, it’s time to consider revitalizing the physician-based organizations that previously played an important role in decreasing the likelihood of a nuclear war between the United States and Soviet Union and redirecting attention to the new threats that have emerged since the end of the Cold War. The International Physicians for the Prevention of Nuclear War organization is an example.

About the Authors: Dr. Gale is a Visiting Professor of Haematology at the Imperial College London, and he is on the medical staff at the University of California, Los Angeles.  He is an authority on medical response to nuclear and radiation accidents and has participated in rescue efforts at Chernobyl, Goiania, Tokaimura, and Fukushima, among other sites of such accidents.

Dr. Nathan is the Robert A. Stranahan Distinguished Professor of Pediatrics and Professor of Medicine, Harvard Medical School in Boston, and President Emeritus of the Dana-Farber Cancer Institute in Boston.

DISCLOSURE: Dr. Gale is a part-time employee of, has stock or other ownership interest in, and has received travel, accommodations, or expenses from Celgene Corp. Dr. Nathan reported no conflicts of interest.

DISCLAIMER: This commentary represents the views of the authors and may not necessarily reflect the views of ASCO or The ASCO Post.