ASCO recently released a clinical practice guideline update on ovarian suppression as part of the extant guideline on adjuvant endocrine therapy in hormone receptor–positive breast cancer, and the recommendations were summarized in the June 10, 2016, issue of The ASCO Post. Also in this issue, Katarzyna J. Jerzak, MD, FRCPC, and Kathleen I. Pritchard, MD, FRCPS, of Sunnybrook Odette Cancer Centre, University of Toronto, offered their perspective on the implications of this 2016 ASCO Guideline for Clinical Practice.

The 2016 ASCO Clinical Practice Guideline, “Update on Ovarian Suppression” (updated from “Guideline on Ovarian Ablation in the Treatment of Premenopausal Women With Early-Stage Invasive Breast Cancer”), uses only the term “ovarian suppression” (with LHRH [luteinizing hormone-releasing hormone] agonists) in the recommendations and in all the discussion.1-3 The focus of the updated guideline is clearly on the question of combined ovarian function–targeting plus endocrine therapies. Additionally, under Guideline Implementation, the first sentence states: “ASCO guidelines are developed for implementation across health settings.” However, by dropping any reference to ovarian ablation plus endocrine therapy, the updated guideline not only ignores a long-standing approved therapy, but also is inconsistent with the Guideline Implementation statement.

The perspective by Drs. Jerzak and Pritchard states: “High-quality evidence to support a recommendation for bilateral oophorectomy as opposed to reversible ovarian suppression with an LHRH agonist is lacking.” The authors follow this statement by noting that such evidence from the SOFT and TEXT trials has not been reported. However, the E-3193 INT-0142, begun over 20 years ago, and the SOFT and TEXT trials, begun about 15 years ago—which offered ovarian ablation as equivalent alternatives to LHRH agonist treatment—could not have been judged scientifically and ethically acceptable in the United States and many other countries if high-quality evidence regarding equivalence of these approaches had not been assessed to be present.

There are several perspectives whose application to the issue of guidelines for treatment supports a conclusion that ovarian ablation (surgical oophorectomy) plus tamoxifen is a better treatment than LHRH agonist plus tamoxifen. To begin, in its report on “Shaping the Future of Oncology: Envisioning Cancer Care in 2030,” the ASCO Board of Directors identified three key drivers of change that will have the biggest impact on cancer care over the coming decades: big data, cancer panomics, and delivering value.4

Although focused in the United States, the ASCO Conceptual Framework to Assess the Value of Cancer Treatment Options states that ASCO’s “highest priority” is delivery of high-quality care to all patients with cancer and discusses “financial toxicity” and the desire of patients for financial information.5 Its value framework for assessment of adjuvant treatments considers clinical benefit, toxicity, and cost.

The Institute of Medicine (IOM) proposes that to decrease the use of wasteful and unethical health services, quality of care must be assessed at multiple levels: effectiveness, safety, efficiency, patient-centeredness, timeliness, and equitability.6 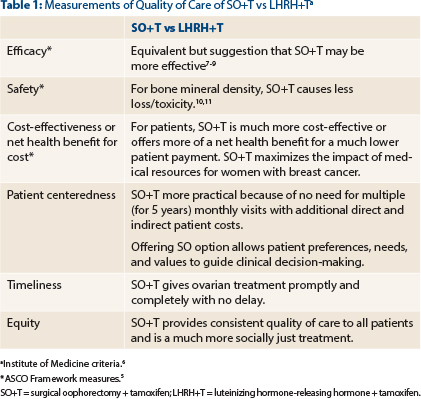 In the context of these circumstances and statements, which emphasize the equivalence in efficacy of ovarian ablation and LHRH agonist treatments as well as the commitment to value and all global cancer victims, I believe there is a mismatch between the values and practice embodied in the updated guideline.

Surgical oophorectomy plus tamoxifen is the optimal adjuvant endocrine treatment for premenopausal women with hormone receptor–positive tumors and should be so recommended in the ASCO guideline. ■

4. ASCO Board of Directors: Shaping the Future of Oncology: Envisioning Cancer Care in 2030: Outcomes of the ASCO Board of Directors Strategic Planning and Visioning Process, 2011-2012. Available at http://www.asco.org/sites/new-www.asco.org/files/content-files/about-asco/documents/2030-shaping-future-oncology-cancer-care.pdf. Accessed July 7, 2016.