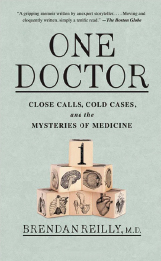 Title: One Doctor: Close Calls, Cold Cases, and the Mysteries of Medicine

The U.S. health-care system is a $3 trillion behemoth of dizzying complexity. Government oversight, ever-changing regulations, mountains of paperwork, electronic health records, initiative after initiative, and so forth, all of which has reshaped the delivery of care, for the good and bad. But one aspect of medicine hasn’t changed since the ancient times of Hippocrates—the one-on-one relationship between doctor and patient. That sacred relationship is the underpinning of an excellent new book by Brendan Reilly, MD, called One Doctor: Close Calls, Cold Cases, and the Mysteries of Medicine.

Dr. Reilly is a widely published educator and researcher who served as Chair of Medicine at Chicago’s Cook County Hospital, which, during his 13-year tenure there, was the inspiration and setting for the hit television series ER. The setting for his book, a 2-week drama in the winter of 2010, is a renowned New York City teaching hospital. Told in the first person, Dr. Reilly recounts in intimate detail his doctoring of patients in the wards, emergency department, and intensive care unit of the hospital.

A Nostalgic Look at Doctoring

According to the author, doctoring has changed quite a bit since he first entered the field, and to add texture and counterpoint to his claim, the author flashes back to his early career as a primary care physician in a small New England town. He writes in the introduction: “There, I did a different kind of doctoring, now largely forgotten or obsolete, when physician-patient relationships were deeper and more enduring than today’s ‘provider-consumer’ medical culture.”

With that sentence, the author runs the risk of waxing nostalgic about the good old days of medicine. In the ‘good old days’ the author eludes to, one all-knowing doctor lived in the community, visited the home, and was available to attend to patients’ needs at any time. Health care has since gone through a transition from being soloists to members of multidimensional teams, which is vital in a medical environment that is evolving at a breakneck pace. But Dr. Reilly understands the transition, and does an admirable job balancing what was lost and gained during his long and fruitful career in medicine.

Dr. Reilly organizes his book into three parts: “Now,” “Then,” “Now.” He’s an accomplished writer with a knack for arresting openings. He writes, “Friday nights are cursed in bog-city hospitals. No one knows why exactly, but mortality rates go up on the weekend…. So, if my team didn’t get any new disasters last night—if we beat the Friday night whammy—it’s cause for celebration.” Later in that chapter, the reader becomes fully aware of the medical dramas that will follow, including careful and brutally honest evaluation of his own profession.

Much of One Doctor is an in-the-moment exploration of high-stakes, life-and-death medicine, the author being a tour guide of sorts. To his credit, he takes pains to underscore the dangers of being in a hospital. Dr. Reilly notes some grim statistics. For instance, he points out that in one recent year, 98,609 hospitalized patients in New York alone suffered a serious injury, which prolonged their hospital stay or resulted in disability. One in seven of these hospital-acquired injuries was fatal. “Extrapolated nationally, this number of iatrogenic deaths was the equivalent of three fatal jumbo-jet crashes every 2 days in the U.S. throughout the year,” he writes.

It was still dark outside our bedroom window when the phone rang. Calls before dawn were always bad news, but ours was a doctor’s house, so we got a lot of them.
— Brendan Reilly, MD

That is a daunting statistic, one that has given fits to the National Institutes of Health. In fairness to hospitals, about one-third of these health “crashes” are unavoidable. “But the remaining two-thirds of these errors, caused by me and others who work in hospitals, are preventable,” he explained. After slamming the reader with these troubling stats, the author does an excellent job discussing how errors occur and how to prevent them.

Overuse of the ER

He tackles another issue: overuse of the emergency room (ER). After examining the reasons for the explosion of ER usage over the past several decades, he then rolls his sleeves up and offers some nuts and bolts solutions. During this section, he notes a figure that will catch many by surprise, who might think that the solution to reducing stress on our overcrowded hospitals is by making them larger. “In fact, there are 25% fewer hospital beds in the United States today than 20 years ago (about 900,000 vs 1.2 million), despite our growing and aging population.”

It’s refreshing to hear a doctor in the trenches speak with such candor and wisdom about health-care challenges, instead of a policy wonk whose knowledge base comes from spreadsheets. Health-care professionals and policy wonks alike will devour this section.

It is worth repeating that One Doctor is a first-person blow-by-blow account of experiential hospital doctoring, replete with all the blood, tears, heroics, and anguish that go with the territory. Readers expecting long patient-doctor encounters that entail rumination, research, and shared decision-making might be disappointed with this title. However, they will be in the minority. Throughout the rapid pace of Dr. Reilly’s medical story, one thing is unmistakable on each page: The author is a doctor’s doctor; he lives and breathes for his patients.

Turning Back the Calendar

The middle section of the book, “Then,” is a deeply drawn reflection on Dr. Reilly’s early days as a primary care doctor in New Hampshire. He turns the calendar back to 1985. The counterpoint between then and now is stark in some ways, but as the reader moves deeper into the narrative, it becomes obvious that time doesn’t change the essence of doctoring. It’s compelling reading. “It was still dark outside our bedroom window when the phone rang. Calls before dawn were always bad news, but ours was a doctor’s house, so we got a lot of them,” he writes.

This journey in the book’s midsection is rife with historical sidebars, all of which blend seamlessly into the central story. The last chapter in the book is by far the most personal. Dr. Reilly’s elderly father is dying in a nursing home in Shelter Island, New York. His mother, who has late-stage dementia, is witness to her husband’s death, although she thinks he’s simply fallen asleep.

At his father’s wake, Dr. Reilly’s brother, Will, asks his mother if she wanted to “kiss Dad good-bye.” When she declines, Will asks her why. “Why? Look at the poor man. I don’t want to wake him up!” she replies.

One Doctor is a deep book without seeming so. Dr. Reilly reveals the whole of medicine into the drama of each patient and his or her doctor. The book builds in strength up to the last page. One Doctor is highly recommended for readers of The ASCO Post. ■