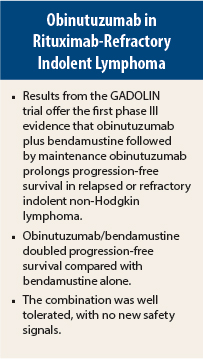 “Indolent NHL is incurable with standard therapy. Rituximab improves overall survival and progression-free survival, but some patients do not respond to rituximab. Others become resistant to rituximab, and these patients have a poor outcome and few treatment options,” explained lead author Laurie Sehn, MD, of the British Columbia Cancer Agency and the University of British Columbia, Vancouver, Canada.

“This study is a remarkable first demonstration of the benefit of a novel antibody for patients who are rituximab-refractory. Results are statistically significant and clinically meaningful, with no new safety signals. Based on these results, bendamustine plus obinutuzumab followed by obinutuzumab maintenance is a novel and effective treatment option for patients with indolent NHL refractory to rituximab,” she stated.

The clinical characteristics were comparable in both arms of the trial. The median age was 63 years, with a median of two prior lines of therapy. More than 90% of patients in each arm were refractory to their previous therapy. Between 76% and 81% were double-refractory to both rituximab and an akylating agent.

Response rates were similar in the two arms. The best overall response rate to 12 months was 78.7% for the combination arm vs 76% for the bendamustine arm. Median overall survival is not yet reached in either arm, but the numbers trend toward favoring the combination arm. However, longer follow-up is needed.

No difference was observed between the two treatment arms in the rate of adverse events, grade 3 or higher adverse events, deaths, and withdrawal from therapy. The most common hematologic toxicities of any grades in both arms were neutropenia (35% for the combination and 29% for bendamustine alone) and thrombocytopenia (15% vs 24%).

“I sometimes think of obinutuzumab as a super-rituximab. These robust results for this novel agent in a rituximab-refractory population are remarkable. This study may open up treatment options for this difficult-to-treat population, and maybe it will even allow these patients with incurable lymphoma to live longer. Obinutuzumab/bendamustine is not yet standard of care but has the potential to be standard of care for those patients who haven’t received bendamustine in the front-line setting,” said Merry-­Jennifer Markham, MD, ASCO expert, of the University of Florida, Gainesville. ■

Jeremy Abramson, MD, Clinical Director of the Center for Lymphoma at Massachusetts General Hospital, Boston, agrees that obinutuzumab is an advance over rituximab.

Like rituximab, obinutuzumab targets CD-20, but rituximab does not directly induce cell death. Obinutuzumab is a type 2 antibody and...

Cancer Survivors Are Adhering to COVID-19–Related Preventive Behaviors, but Continuity of Care May Be Impacted