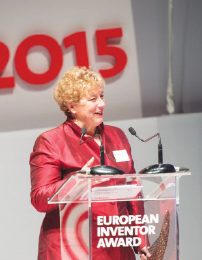 Laura van’t Veer, PhD (Netherlands), winner of the European Inventor Award 2015 in the smalland medium-sized enterprises category, at the ceremony at the Palais Brongniart in Paris on June 11. Photo credit: European Patent Office.

Laura van’t Veer, PhD, Co-leader of the University of California San Francisco Helen Diller Family Comprehensive Cancer Center (HDFCCC) Breast Oncology Program, and her team at the Netherlands Cancer Institute were awarded the European Inventor Award for the invention of a gene-based tissue test, which makes it possible to offer targeted treatment for breast cancer. The European Patent Office presented the award on June 11 in Paris.

It provides women in the early stage of breast cancer with a reliable prognosis as to whether chemotherapy is actually necessary. Patients who have a lower risk of recurrence are able to recover and stay tumor-free without chemotherapy. The technology has already helped over 40,000 women with treatment for cancer and means that 20% to 30% fewer women may have to undergo lengthy chemotherapy.

Speaking at the ceremony, she thanked her team and described the satisfaction of turning “research findings into real products for patients.” She said: “I appreciate being able to provide something that provides the most optimal treatment.”

How the Test Works

In 2001, the biologist and her team at the Netherlands Cancer Institute discovered that a specific DNA signature made up of 70 genes is what determines the risk factor for the recurrence of breast cancer in women. Before this, doctors relied solely on the pathologic findings, age of the patient, and number of divided cancer cells when deciding upon treatment. “We discovered that we could identify a gene activity pattern in the tumors that would allow us to distinguish high-risk cases from low-risk ones,” said Dr. van’t Veer.

The test measures the activity of tumor-specific DNA with the help of a microchip. Using just a small tissue sample from the patient, the test can deliver results within 10 days and determine if the patient is at high risk or not. “You can compare the activity of genes that are either switched on or off. If the gene is switched on, the tumor is very aggressive. If those 70 genes are switched off, then the tumor will remain in its place, and there is not much risk of recurrence,” she explained. ■

How Exercise Oncology Can Improve Cancer Outcome and Survivorship

Irene M. Ghobrial, MD, on How COVID-19 is Changing the Conduct of Clinical Trials