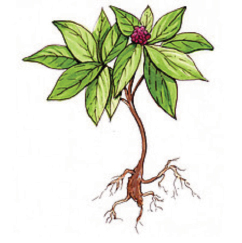 A perennial herb with a fleshy root, American ginseng is a native of eastern North America. It was used by Native Americans to treat headaches, fever, indigestion, and infertility. The plant was introduced to China over 300 years ago, where it was prized as a health tonic and continues to be popular today. Both the fresh and dried forms of the root are used in herbal remedies for a variety of ailments. The dried roots of American ginseng are also used in supplemental form to improve athletic performance, strength, and stamina and to treat diabetes and cancer.

Extracts of American ginseng are available in the form of powders, capsules, or liquid tinctures. The whole roots are used to prepare tea. However, quality control is a major issue. Because of the heavy demand for and high price of this herb, adulteration with morphologically similar plants is not uncommon.

American ginseng should not be confused with Panax ginseng or Siberian ginseng, which have different medicinal properties.

Ginsenosides, the saponin glycosides present in the root and other parts of the plant, have been identified as the active compounds. They have been shown to exert both stimulatory and inhibitory effects on the central nervous system,1 alter cardiovascular tone, enhance humoral and cellular-dependent immunity, and exert anticancer effects in vitro.2

The ginsenoside Rg1 is associated with improvements in humoral and cell-mediated immune response and increases in T helper cells, T lymphocytes, and natural killer cells in mice.3 A metabolite of the ginsenoside Rb1, compound K, was shown to have antiproliferative effects.4

Clinical data suggest that American ginseng may improve glucose control in patients with diabetes5 and that it is safe for long-term use6; has a modest effect in reducing the number and severity of colds7; and enhances working memory in healthy adults8 and in patients with schizophrenia.9

Studies conducted to explore the anticancer potential of American ginseng revealed that its activity was enhanced when combined with antioxidants.10 It had synergistic effects with fluorouracil against colorectal cancer cells11 and conferred protection against oxidative stress in irradiated human lymphocytes.12

Data from an epidemiologic study indicate that American ginseng improved survival and quality of life in patients with breast cancer patients.13 Recent findings from a randomized controlled trial support its benefits in improving cancer-related fatigue.14

Warfarin: American ginseng has been shown to antagonize warfarin’s effects.15

Cytochrome P450 (CYP) 3A4 substrates: Certain ginsenosides can induce CYP3A4 and may affect the metabolism of some drugs that are substrates of this enzyme.16,17

The Integrative Medicine Service at Memorial Sloan Kettering Cancer Center developed and maintains a free website—About Herbs (www.mskcc.org/aboutherbs)—that provides objective and unbiased information about herbs, vitamins, minerals, and other dietary supplements, and unproved anticancer treatments. Each of the close to 300 and growing number of entries offers health-care professional and patient versions, and entries are regularly updated with the latest research findings.