The multitargeted tyrosine kinase inhibitor sunitinib (Sutent) is established as first-line therapy in metastatic clear cell renal cancer. Data supporting use of cytoreductive nephrectomy in metastatic clear cell renal cancer come from the pre–targeted therapy era, when less-effective immune therapy was standard of care, and the role of nephrectomy in the setting of targeted therapy has not been well established. Most patients in randomized trials of sunitinib had undergone nephrectomy prior to receiving sunitinib treatment. Treatment with sunitinib prior to nephrectomy may pose a number of important advantages, including disease control and potential tumor downstaging that could facilitate surgery and selection of patients with rapidly progressive disease who may not be expected to have optimal benefit from nephrectomy. On the other hand, presurgical treatment could also be associated with such adverse consequences as delayed wound healing, local progression during the treatment interval prior to surgery, and tumor regrowth in the interval off treatment during the nephrectomy period.

In a recent issue of the Annals of Oncology,1 Thomas Powles, MD, and colleagues, from St. Bartholomew’s Hospital, University College Hospital London, Whipps Cross Hospital, and The Royal Free Hospital in London, and The Netherlands Cancer Institute in Amsterdam, reported findings from two single-arm phase II studies of sunitinib prior to planned nephrectomy that help shed light on what might be expected from this approach. The two trials were nearly identical in terms of patient characteristics, design, and endpoints, but differed in number of cycles of sunitinib and duration of sunitinib-free interval prior to nephrectomy.

Previously untreated patients with newly diagnosed metastatic clear cell renal cancer received either two (study A, n = 19) or three (study B, n = 33) cycles of oral sunitinib at 50 mg/d for 4 weeks on/2 weeks off before planned nephrectomy, with surgery taking place 24 hours (study A) or 14 days (study B) after the last dose of sunitinib; sunitinib treatment resumed after 21 days (study A) or a minimum of 14 days (study B) after surgery. Among all 52 patients, 77% were male, median age was 60.5 years, median longest diameter of primary tumor before treatment was 9.45 cm, 71% of patients had two or more metastatic sites, and 33% had Memorial Sloan-Kettering Cancer Center (MSKCC) poor-risk disease; more patients in study B (50% vs 5%) had poor-risk disease.

With regard to overall patient outcomes, median progression-free survival was 8 months and median overall survival had not been reached at the time of reporting. Number of metastatic sites was the only factor significantly associated with shorter progression-free survival, whereas such factors as study design, MSKCC prognostic group, gender, and age had no significant impact on outcome.

Overall, clinical benefit by RECIST criteria occurred in 38 (73%) of patients (79% in study A and 70% in study B), with 5 patients (10%) achieving an overall partial response; 12 (24%) had progression of disease at the time of surgery. The partial response rate for metastatic sites (27%) was higher than that for the primary tumor. The number of cycles of sunitinib prior to therapy did not have a significant effect on overall response rate. There was no difference in outcome between patients with MSKCC poor-risk disease and those with intermediate-risk disease.

Grade 3 or worse toxicity occurred in 30% of patients with upfront sunitinib, with 21% having a dose reduction. The most common toxicities were mucositis (15%), hand-foot syndrome (11%), fatigue (9%), hypertension (6%), and diarrhea (6%). Toxicity did not delay scheduled surgery in any patient.

A total of 37 patients (70%) underwent radical nephrectomy, with reasons for not undergoing surgery including progression of systemic disease (n = 9), patient choice (n = 3), and being unfit for surgery (n = 2). As noted by the investigators, the patients who declined or were considered unfit for nephrectomy “were benefitting from sunitinib and it was felt that the risks of interrupting treatment and surgery outweighed the benefits.”

The majority of tumors were grade 2 or 3. In total, 49% of tumors contained greater than 50% necrosis. Tissue fibrosis was a prominent feature in 13 patients (62%) in study B, but was not observed in patients in study A. Median blood loss during surgery was 725 mL, median duration of surgery was 189 minutes, and median hospital stay was 8 days. Plasma creatinine level increased significantly (from 78 to 109 µmol/L) after surgery. Surgical complications occurred in 10 patients (27%), including delayed wound healing in 5 and postoperative edema, bleeding requiring surgical reintervention, renal failure requiring dialysis, and postoperative hypotension requiring intensive care unit admission in 1 patient each. Postoperative death due to respiratory failure occurred in 1 patient. There was no difference in surgical complications according to whether presurgical duration off sunitinib was 1 or 14 days. 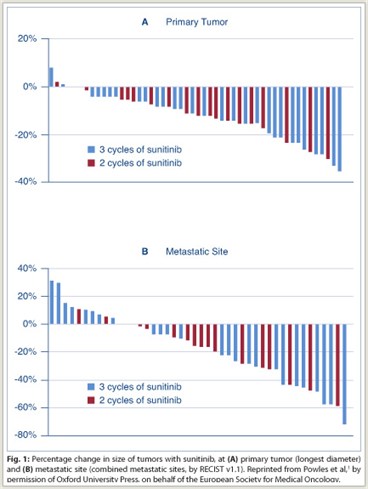 The median time from nephrectomy to restarting sunitinib was 21 days. Of 32 patients, 8 exhibited progression of disease by RECIST criteria during the postsurgery time off treatment. Among those with progression, reintroduction of sunitinib resulted in disease stabilization in 5 of 7 patients when compared with metastatic sites at the last staging before nephrectomy.

As stated by the investigators, results of this experience with presurgical sunitinib indicate that the approach is “surgically safe and associated with promising efficacy, with the majority [of patients] obtaining a clinical benefit…. Despite [the relative lack of responses] in the primary tumor, the majority of patients obtained some tumor shrinkage and none became inoperable, which is reassuring.” The finding that 1 day off drug prior to surgery was not associated with any greater surgical risk is also reassuring; such an approach would permit reduced time off sunitinib therapy.

Findings in these studies contributed to the design of a phase III study (European Organisation for Research and Treatment of Cancer 30073, ClinicalTrials.gov identifier NCT01099423) evaluating immediate nephrectomy vs delayed surgery with preoperative sunitinib in metastatic clear cell renal cancer.2 In this study, which currently is recruiting patients, an estimated 458 patients are being randomly assigned to immediate or deferred nephrectomy.

The phase III study was initiated in April 2010, and its estimated completion date is in 2014. ■

Disclosure: Among the authors of the Annals of Oncology article, Drs. Powles and Bex reported participating in advisory boards for Pfizer in 2009. In addition, Pfizer supplied research grants to support the work reported in the Annals article.