Cabozantinib, a dual inhibitor of MET kinase and the vascular endothelial growth factor (VEGF) receptor, exhibits high, early single-agent activity in men with metastatic castrate-resistant prostate cancer, according to Maha Hussain, MD, FACP, who presented these findings at the 2011 ASCO Annual Meeting.1 Dr. Hussain, of the University of Michigan in Ann Arbor, reported that cabozantinib therapy resulted in a 76% rate of complete or partial resolution of bone scans, with objective disease control seen in 68% of patients at 12 weeks.

Cabozantinib (XL184) is a potent oral inhibitor of the MET, VEGFR2, and RET tyrosine kinases. In a phase I study, cabozantinib demonstrated clinical activity in patients with medullary thyroid cancer. MET and its ligand HGF are believed to promote tumor growth, invasion, and metastasis, and MET expression is often observed in bone metastases and in advanced prostate cancer. Preclinical studies have demonstrated that inhibition of MET reduces cell proliferation in mouse xenograft models of prostate cancer.2 These data led to the current study of cabozantinib in patients with metastatic castrate-resistant prostate cancer.

In this randomized discontinuation phase II trial, patients with multiple solid tumors were administered oral cabozantinib at a daily dose of 100 mg for a 12-week lead-in stage. Subsequent continuation of therapy was based on observed response at 12 weeks: patients with a partial response continued receiving open-label cabozantinib, men with stable disease were randomized to cabozantinib or placebo, while those with progressive disease discontinued therapy.

The primary endpoint was objective response rate per modified Response Evaluation Criteria in Solid Tumors (mRECIST v. 1.0) in the lead-in stage. Up to 200 patients could be enrolled to target 70 patients for randomization, for a power of 0.80 to detect a hazard ratio of 0.50. Patients in the metastatic castrate-resistant prostate cancer cohort were required to have progressive measurable disease (mRECIST v. 1.0) and could have received one prior chemotherapy regimen (or none), excluding other experimental treatments.

Median age was 68 years; ECOG performance status was 0 in 52% of patients and 1 in 48%; 37% had visceral disease. Bone disease was present in 87% of patients, and 43% were pretreated with docetaxel. Randomization was halted at 122 patients based on the high rate of clinical activity observed. A total of 177 patients were accrued.

There were 7 confirmed partial responses in the lead-in stage (with an additional 3 partial responses subsequently observed), and stable disease was seen in 135 patients (79%), for a disease control rate (partial responses plus stable disease) of 68%. However, 74% of treated patients showed measurable tumor regression, which was independent of prior treatment. Post-randomization progression-free survival was 21 weeks for patients on cabozantinib vs 6 weeks on placebo (HR = 0.13; log-rank P = .0007). With a median follow-up of 4 months (range 1–15 months), the overall median progression-free survival is 29 weeks. 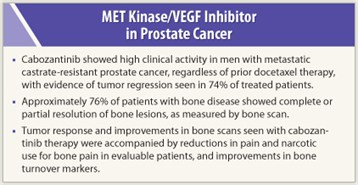 By week 12 of the study, complete resolution of bone scans was observed in 19% of patients and partial resolution in 56% of patients. Additionally, noted Dr. Hussain, in 67 patients receiving narcotics for bone pain, 70% had improved pain, and 56% of assessable patients had decreased or halted narcotics as determined by an investigator.

Improvements in bone turnover markers were also observed, with the majority of patients experiencing decreases of ≥ 50% in plasma C-telopeptide. In addition, declines in total alkaline phosphatase of ≥ 50% were observed in the majority of patients with increased baseline levels. “Patients who had complete or partial bone scan resolution had higher rates of target lesion regression, higher rates of progression-free survival at 6 months, greater pain improvement, higher reduction in narcotic use, and greater reduction in bone turnover markers,” said Dr. Hussain.

The most common grade 3 toxicities during lead-in stage regardless of causality were fatigue (16%), hypertension (6%), and hand-foot syndrome (6%). Dose reductions for adverse events occurred in 51% of patients, and discontinuations due to adverse events in 15% during the 12-week lead-in stage.

Dr. Hussain concluded that in patients with progressive castrate-resistant prostate cancer, “cabozantinib has substantial antitumor activity,” with significant rates of disease regression and objective disease control, and complete or partial resolution of bone scans at 12 weeks. Cabozantinib is currently undergoing further evaluation in docetaxel-pretreated patients in this setting. ■

Disclosure: Dr. Hussain has served as an uncompensated consultant for Exelixis.