As part of our ongoing coverage of the 2011 ASCO Annual Meeting, The ASCO Post has provided substantive reports on key breast cancer trials, but others deserve attention. 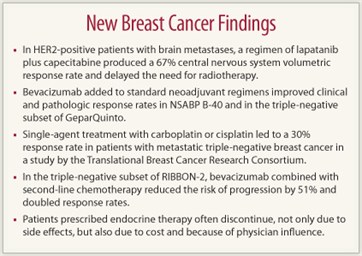 For 43 patients followed a median of 14 months, at least an 80% reduction in central nervous system lesion volume was observed in 20.9% of patients, while 46.5% had a reduction of 50% to 80%, reported Thomas Bachelot, MD, of the Centre Léon Bérard in Lyon.

Extra–central nervous system responses were also frequent, occurring in 42.9%; another 45.7% had stable clinical disease. Median time to progression was 5.5 months, and median time to whole brain radiotherapy was 7.8 months. Six-month overall survival was 90.9%.

The benefit was robust in some cases, Dr. Bachelot noted. “One patient, for example, with 25 small brain metastases had a dramatic 98% volumetric reduction in lesions and is still on treatment after 13 months,” he reported.

Nancy U. Lin, MD, of Harvard Medical School, Boston, commented that the study shows systemic approaches can be effective in treating HER2-positive brain metastases. “The results of LANDSCAPE raise the possibility that in the future, radiotherapy may be reserved for the salvage setting,” she said. “Continued active effort in this area is needed.”

In the National Surgical Adjuvant Breast and Bowel Project (NSABP) B-40 trial, bevacizumab (Avastin) added to regimens based on docetaxel followed by doxorubicin/cyclophosphamide significantly increased clinical and pathologic complete response rates, especially in the hormone receptor–positive subset. Neither capecitabine nor gemcitabine (Gemzar), however, conferred additional benefit when added to docetaxel but did contribute to toxicity, reported Harry D. Bear, MD, of Virginia Commonwealth University and the Massey Cancer Center, Richmond.2

Although neoadjuvant bevacizumab did not significantly increase pathologic complete responses in the triple-negative subset of NSABP B-40, it did improve responses among patients with triple-negative breast cancer in the GeparQuinto study, which was presented by Bernd Gerber, MD, of Rostock, Germany.3 The 684 patients were randomly assigned to epirubicin/cyclophosphamide followed by docetaxel (EC-Doc) with or without bevacizumab.

The addition of bevacizumab to second-line chemotherapy improved progression-free survival in patients with triple-negative breast cancer in RIBBON-2, reported Adam Brufsky, MD, PhD, of the University of Pittsburgh.4

RIBBON-2 enrolled 684 HER2-negative locally advanced or metastatic patients with one prior chemotherapy regimen to second-line chemotherapy (physician’s choice) with or without bevacizumab. His presentation focused on the 159 patients with triple-negative breast cancer. Median progression-free survival was 6.0 months with bevacizumab/chemotherapy compared with 2.7 months with chemotherapy alone, for a highly significant 51% reduction in risk (P = .0006). Objective response rates were 41% and 18%, respectively (P = .0078).

“Despite the immature data and small sample size, there was also a trend toward improved overall survival, from 12.6 months with chemotherapy to 17.9 months with bevacizumab,” Dr. Brufsky reported (hazard ratio = 0.624; P = .0534).

Both carboplatin and cisplatin, given as single agents, showed significant activity as a first- or second-line treatment against metastatic triple-negative breast cancer in a study of 86 patients by the Translational Breast Cancer Research Consortium, TBCRC009.4

Steven J. Isakoff, MD, PhD, of Massachusetts General Hospital, Boston, reported that the overall response rate to the compounds was 30.2%, including 4.7% complete responses. Subgroup analyses of the multicenter single-arm trial showed higher responses with cisplatin (37%) than carboplatin (23%), but absent a randomized comparison, Dr. Isakoff cautioned against making treatment decisions based on this difference.

Oncologists need to pay increased attention to side effects related to endocrine treatments and perhaps adjust their message to patients. This was the conclusion of the Cancer Surveillance and Outcomes Team (CanSORT) study, led by T. May Pini, MD, MPH, of the University of Michigan, Ann Arbor, who evaluated reasons why compliance rates are poor with tamoxifen and aromatase inhibitors.5

They surveyed 503 women 4 years after diagnosis of invasive hormone-responsive breast cancer, and looked at the percentage of noninitiators (who never started therapy), nonpersistors (who started but discontinued), and persistors (who continued on treatment).

Dr. Pini and colleagues also asked patients about the reasons why they never initiated therapy, as well as why they stopped prior to completion of a full course. Among patients who did not initiate treatment (n = 56), women expressed concerns about side effects (27%) or chose not to take their physician’s recommendation (16%); concerns about costs were less common (5%). (Note: responses were not mutually exclusive.) The most common reason for failure to start treatment, however, was that “the doctor said therapy was not needed” (39%); several (4%) reported their physicians did not even discuss endocrine therapy.

Of the 447 women who initiated therapy, 83% were persistors and 17% were nonpersistors. Nonpersistence was related to side effects (27%); cost (18%), with less prescription medication coverage associated with an increased likelihood of nonpersistence; and concerns about adverse effects (16%). Patients also cited a dislike of being on medications (17%) and the need to “move on” from the cancer (11%). Almost one out of six patients (16%) said they were “told to stop” by their physician. Women whose physicians were not medical oncologists had nearly a threefold higher likelihood of nonpersistence.

“Decreasing out-of-pocket costs may increase persistence with adjuvant endocrine therapy. Doctors also need to focus attention on the challenging issue of treatment side effects,” Dr. Pini said. Research should aim to identify modifiable aspects of physician-patient communication that could improve rates of initiating and persisting with therapy. ■