The preferred targeted therapy for left-sided RAS wild-type metastatic colorectal cancer, in combination with standard chemotherapy, is panitumumab, not bevacizumab, based on a head-to-head comparison in the phase III PARADIGM trial. Panitumumab plus chemotherapy yielded the longest overall survival ever reported in a prospective phase III trial in first-line metastatic colorectal cancer. Takayuki Yoshino, MD, PhD, of the National Cancer Center Hospital East, Chiba, Japan, presented the data at the Plenary Session of the 2022 ASCO Annual Meeting.1

“It has long been believed that the sequence of treatment in metastatic colorectal cancer does not matter as long as patients had access to the drugs at some point in their treatment,” Dr. Yoshino added. “This trial demonstrates that, for RAS wild-type and left-sided metastatic colorectal cancer, the choice of the initial biologic with chemotherapy does matter and that initial treatment with panitumumab with FOLFOX [fluorouracil, leucovorin, oxaliplatin] chemotherapy is superior to initial treatment with bevacizumab plus FOLFOX chemotherapy.”

PARADIGM is the first prospective trial to test the superiority of panitumumab vs bevacizumab in combination with standard doublet first-line chemotherapy in patients with RAS wild-type metastatic colorectal cancer and left-sided primary tumors. In CALGB/SWOG 80405 and FIRE-3, the EGFR inhibitor cetuximab was compared with bevacizumab but lacked a prospective assessment according to tumor site. Retrospective analyses have suggested that EGFR inhibitors are superior to VEGF therapy in the first-line setting for left-sided wild-type RAS tumors, but in the absence of prospective data, bevacizumab continues to be widely used.

The open-label multicenter trial conducted in Japan randomly selected patients with chemotherapy-naive RAS wild-type tumors to panitumumab plus modified (m)FOLFOX6 or bevacizumab plus mFOLFOX6. Overall survival as the primary endpoint was hierarchically tested in patients with left-sided tumors; this was followed by assessment in the overall population.

The population included 823 patients, 802 of whom ultimately received treatment and satisfied key eligibility criteria. The population with left-sided primary tumors included 312 patients receiving panitumumab and 292 receiving bevacizumab. Overall survival was analyzed after 448 events in the patients with left-sided disease, which occurred after a median follow-up of 61 months. 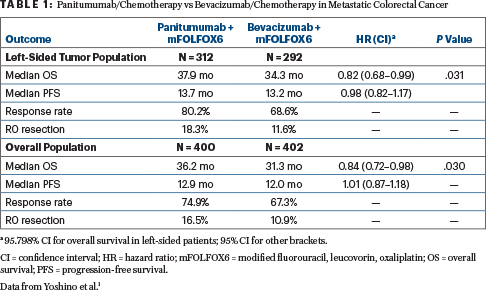 Although PARADIGM was conducted in Japan, there is no reason to believe these results are not applicable to non-Asian patient populations, Dr. Yoshino emphasized. Large-scale biomarker analysis is currently underway using plasma and tumor tissue samples collected before and after treatment.

“The results from PARADIGM highlight the importance of RAS testing at initial diagnosis of metastatic disease in left-sided colorectal cancer and tailoring initial therapy based on the results,” Dr. Yoshino commented.

The invited discussant of PARADIGM, Chiara Cremolini, MD, PhD, Professor of Medical Oncology at the University of Pisa, Italy, said the findings prospectively confirm the superior benefit of FOLFOX (fluorouracil, leucovorin, oxaliplatin) paired with panitumumab rather than bevacizumab in RAS...