The 21st Century Cures Act: A Look Back, a Look Ahead

It was ambitious and it was controversial, but the bipartisan 21st Century Cures Act (Cures) made it through both houses of Congress and was signed into law in December 2016. Sponsored by Representatives Diana DeGette (D-CO) and Fred Upton (R-MI), the landmark legislation funded new medical research programs at the National Institutes of Health, including the Cancer Moonshot, the BRAIN Initiative (Brain Research through Advancing Innovative Neurotechnologies), and the Precision Medicine Initiative. It addressed mental health and provided funds for states to combat the opioid epidemic.

Cures also tackled the complicated field of health information technology, particularly electronic health records, and the crucial issue of interoperability among these systems. In addition, it prohibited information-blocking practices. In its most controversial provision, Cures sought to streamline the drug-approval process by allowing the use of surrogate markers, such as real-world evidence, in place of standard clinical proofs of safety and effectiveness, such as survival. 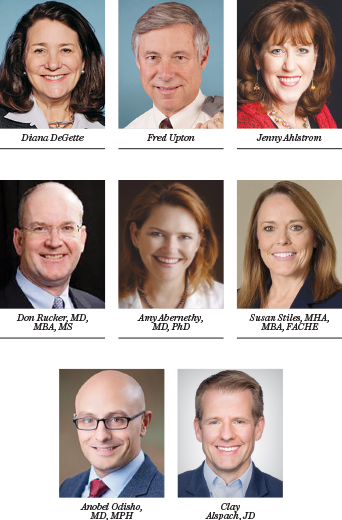 Now, as the legislation nears its 4th anniversary, policymakers, patient advocates, clinicians, and others are considering the impact of the act and how to build on what it has accomplished. Many of these stakeholders came together recently at a virtual Policy Summit, a webinar convened by the National Comprehensive Cancer Network® (NCCN®). Titled “Accelerating Advances in Cancer Care Research: A Look Back at the 21st Century Cures Act in 2020,”1 the summit began with recommendations for policy improvements developed by an NCCN working group (see related article), continued with talks and panel discussions of major issues, and concluded with a look ahead to the next iteration of the Act—Cures 2.0.

Several major themes emerged in the course of the webinar. These issues included the need for improvements in health information technology, the need for greater emphasis on patient-centered care and patient-focused drug development, and the role of real-world evidence in oncology.

Despite the Cure’s support for electronic health records, the lack of interoperability between systems developed by different vendors has continued to make access difficult at times for both patients and clinicians.

“Today, it takes an extraordinary effort for patients to access their records at multiple facilities in order to share it so it is correlative with other patients and relevant for research,” said panelist Jenny Ahlstrom in one of several discussions moderated by Clifford Goodman, PhD, of The Lewin Group. Ms. Ahlstrom, who is the Founder of the CrowdCare Foundation and a patient with multiple myeloma, said:“Our current process and lack of data make it difficult for patients to make life-and-death decisions around their care. Easing this process will enable the generation of faster, new hypotheses from the research community, which will in turn save patient lives.”

Two of the new NCCN recommendations (see sidebar) call for improvements in accessing medical records. In an important step in that direction, the Office of the National Coordinator for Health Information Technology (ONC) recently issued its “Final Rule on the 21st Century Cures Act,” supporting access to electronic records for both patients and physicians and prohibiting information blocking.

Speaking at the Summit, ONC Chief Don Rucker, MD, MBA, MS, said the final rule “will give patients unprecedented access to and control over their medical records.” It will also, he said, “improve care coordination by allowing patients to aggregate and share records across clinicians, increasing patients’ agency to take their records and seek further opinions.”

The 21st Century Cures Act directed the U.S. Food and Drug Administration (FDA) to create a program for evaluating the use of real-world evidence for two purposes: (1) to help support the approval of a new indication for an already-approved drug, and (2) to help support or satisfy postapproval study requirements.

This provision “set the stage for accelerating the role of real-world evidence in patient-focused drug development,” said the FDA’s Amy Abernethy, MD, PhD, Principal Deputy Commissioner of Food and Drugs. In a discussion with moderator Cliff Goodman, Dr. Abernethy pointed to the multiple sources of real-world evidence, including not only electronic health records, but also clinical case notes, registries, insurance claims, patient-reported outcomes, and laboratory data—a combination of “rich clinical information and rich biologic information” that over time can provide valuable insights about treatments and outcomes.

In the panel discussion that followed, experts agreed that one of the positive impacts of Cures is the greater use of real-world evidence. With its use, “we see the opportunity to build a longitudinal picture,” said Susan Stiles, MHA, MBA, FACHE, an executive in the Oncology Business Unit of the Cerner Corporation. “That can lead to better outcomes,” she said, “as well as helping with patient navigation.”

Panel members agreed the Act had given a boost to clinical trials but some issues still need attention. Greater diversity among trial participants would be helpful for obtaining data on different outcomes by race and national background, said Anobel Odisho, MD, MPH, a urologist at the University of California, San Francisco (UCSF) Helen Diller Family Comprehensive Cancer Center and Clinical Informatics Lead at the UCSF Center for Digital Health Innovation. Dr. Odisho is working to make all patients more aware of their eligibility for trials.

Ms. Ahlstrom noted it is difficult for patients to find trials for which they are eligible in ClinicalTrials.gov, the federal database of current trials. Improvements in the technology to allow a search for trials for which a specific patient is eligible would be a major step forward, the panel agreed.

Clay Alspach, JD, a principal at Leavitt Partners, who helped design the original act, added that a major priority should be to ensure patients are represented in policymaking. Additional guidance from the FDA and a discussion of trial design and support would also be of use, he said, as well as more information to guide the “risk-benefit calculus” in deciding on a treatment. “We have the technology to gather information to help in that decision,” he said.

Asked by moderator Cliff Goodman about the impact of the COVID-19 pandemic, the panel discussion turned to the dramatic increase in the use of telehealth in place of in-person office visits. Dr. Odisho noted the number of telehealth visits at UCSF has grown to thousands per week.

Telehealth is probably here to stay, panelists agreed, although it may need to evolve in some ways. One issue is reimbursement for telehealth visits, which can be difficult for oncologists, said Ms. Stiles. Another may be the quality of care: “The field is immature, and there are significant opportunities to improve the quality of remote patient care,” Dr. Odisho said, “such as video visits, automated workflows, and asynchronous virtual care.”

Many of the issues discussed in the webinar had been on the minds of Representatives DeGette and Upton when they began work on the next iteration of the 21st Century Cures Act, now dubbed Cures 2.0. Although the initial legislation focused on the discovery of new cures, Cures 2.0 will concentrate on ways to safely and efficiently modernize the delivery of care.

Speaking at the Summit, Representatives DeGette and Upton discussed their concept paper for Cures 2.0 and the key areas it addresses (https://degette.house.gov/sites/degette.house.gov/files/Cures%202.0%20Concept%20Paper_0.pdf). They include:

The sponsors said they were taking comments and had received more than 500 at the time of the webinar in June. The next step is a discussion draft, to be released later this summer.

As the 21st Century Cures Act approaches its 4th anniversary, the National Comprehensive Cancer Network® (NCCN®) convened a working group made up of multidisciplinary experts from across the country to analyze current issues related to ...