The ASCO Post’s Integrative Oncology series is intended to facilitate the availability of evidence-based information on integrative and complementary therapies sometimes used by patients with cancer. In this installment, Ting Bao, MD, DABMA, MS, and Jyothirmai Gubili, MS, explore the current research findings regarding the antioxidant and immunostimulatory effects of chaga mushroom, available in the form of teas and extracts. They note that clinical trials are needed to confirm such effects.

Prevalent in cold climates, chaga mushroom grows on birch and other trees. It has been used as a folk remedy in Russia, the Baltics, and other northern European countries to treat various ailments, including digestive system disorders, ulcers, as well as cancer. The part used medicinally, known as the conk, consists of wood from the substrate tree and mycelium of the invasive fungus.

Although edible, chaga mushroom is not commonly consumed due to its bitter nature. Instead tea made from the whole mushroom is more popular. Chaga extracts are also marketed as supplements in the form of capsules, tablets, and teas for their antioxidant and immunostimulatory effects. Efforts are underway to develop cultivated substitutes of wild chaga due to overharvesting of natural reserves.1

Patients and care teams should be aware of the possible risk of nephropathy associated with the use of changa mushroom and its interactions with antiplatelet or anticoagulant drugs as well as with hypoglycemic agents.

Studies in murine models indicate that a chaga extract (0.1, 1.0, and 10.0 mg, administered orally once daily for 21 days; 20 μg or 200 μg, given intraperitoneally on days 0 and 21) inhibited allergen-induced systemic anaphylactic shock. Significant reductions were observed in immunoglobulin E production (P < .01), with intraperitoneal administration reported to be more effective than the oral route.9

Another oral extract (50 and 100 mg/kg administered for 7 days) significantly improved learning and memory (P < .01) in scopolamine-induced amnesic mice, likely through its antioxidant property and also by inhibiting acetylcholinesterase.10

And in an experimental colitis model, similar doses of 50 mg/kg and 100 mg/kg, twice a day, for 14 days showed anti-inflammatory effects by suppressing the inflammatory mediators tumor necrosis factor–alpha and inducible NO synthase together with interleukin-1 beta.11

Chaga polysaccharides (0, 100, 200, and 300 mg/kg/d orally for 14 days) also alleviated fatigue in mice by enhancing swimming time, and the glycogen content of liver and muscle, while decreasing blood lactic acid and serum urea nitrogen levels.12 In addition, these polysaccharides (at a dose of 50 mg/kg orally, once daily, for 4 weeks) decreased fasting plasma glucose levels, enhanced glycometabolism, and regulated inflammatory cytokines in streptozotocin-induced diabetic mice, via modulating oxidative stress and inflammatory factors.13

Chaga has been evaluated for its anticancer potential as well. Its extracts demonstrated inhibitory and proapoptotic properties against colon cancer14 and hepatoma15 cells. Inotodiol, a triterpenoid derived from chaga, exhibited antitumor effects against cervical cancer cells,16 reduced toxicity associated with radiation,17 and inhibited melanoma cell growth in murine models.18 Mechanistic studies revealed that the inhibitory effects of chaga on colorectal cancer cells were due to downregulation of the  beta-catenin pathway.19
Inotodiol inhibited proliferation along with inducing apoptosis in cervical cancer cells via increased Bax expression, decreased Bcl-2, downregulated cyclin E, and upregulated p27.16

Results from a small clinical study suggest chaga’s potential to inhibit oxidative stress. An extract, at variable doses of 10 mg/mL to 500 mg/mL, was shown to decrease hydrogen peroxide–induced DNA damage in peripheral lymphocytes derived from healthy individuals (n = 20; P < .001) and those with inflammatory bowel disease (n = 20; P < .001).20 Larger randomized clinical trials are needed to determine the significance of these findings. 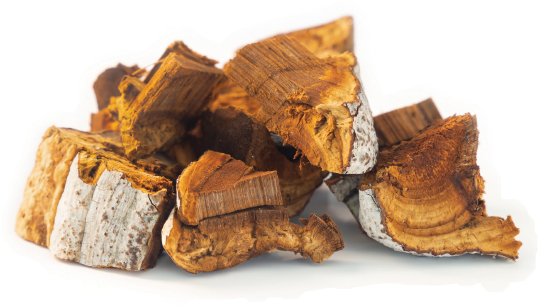 In a single case report, oxalate nephropathy was associated with ingestion of chaga mushroom powder (4–5 teaspoons daily for 6 months), in a 72-year-old woman with liver cancer.21

Antiplatelet or anticoagulant drugs: Chaga extract inhibited platelet aggregation in a murine model.5 It may also have synergistic effects when used with anticoagulant/antiplatelet drugs. However, the clinical relevance of these findings is not known.

Hypoglycemic agents: In vitro, chaga had additive effects in lowering blood sugar levels.6 Again, the clinical significance of this finding is yet unknown.

Chaga mushroom tea and extracts have been marketed for their antioxidant and immunostimulatory effects, mainly supported by in vitro and in vivo studies. However, clinical trials are needed to confirm such effects. Patients and care teams should be aware of the possible risk of nephropathy associated with the use of chaga and its interactions with antiplatelet or anticoagulant drugs as well as with hypoglycemic agents. ■

DISCLOSURE: Dr. Bao was on the advisory board of Eisai. Ms. Gubili reported no conflicts of interest.

17. Rasina LN: Effect of cryosubstance Chagi on deposition or isolation of 90Sr and on the effect of prolonged external exposure to gamma-radiation. Radiats Biol Radioecol 42:399-403, 2002.