ATEZOLIZUMAB (TECENTRIQ) plus bevacizumab (Avastin) plus a platinum doublet (ABCP) improved overall survival by 22% compared with bevacizumab plus a platinum doublet (BCP) in patients with advanced wild-type (without an identified mutation) nonsquamous non–small cell lung cancer (NSCLC), according to the results of the phase III IMpower 150 trial presented at the 2018 ASCO Annual Meeting.1 Interestingly, survival was also improved by the checkpoint inhibitor/vascular endothelial growth factor (VEGF) inhibitor/chemotherapy combination in patients with epidermal growth factor receptor (EGFR) and anaplastic lymphoma kinase (ALK) mutations, as well as in those with liver metastasis. Survival improvement was seen with the four-drug combination irrespective of the programmed cell death ligand 1 (PD-L1) expression level. These study findings were published in The New England Journal of Medicine to coincide with the presentation at the ASCO meeting.2

“The IMpower150 trial met its co-primary endpoints of progression-free and overall survival and demonstrated a statistically significant and clinically meaningful benefit with atezolizumab plus bevacizumab and chemotherapy vs bevacizumab plus chemotherapy alone in the first-line nonsquamous NSCLC setting, across all PD-L1 subgroups. In the landmark analysis, you see an approximate doubling in the 12-month and a tripling in the 18-month progression-free survival rate,” said lead author Mark A. Socinski, MD, Executive Medical Director of the Florida Hospital Cancer Institute, Orlando, Florida.

“In the landmark analysis, you see an approximate doubling in the 12-month and a tripling in the 18-month progression-free survival rate [with atezolizumab, bevacizumab, and chemotherapy].”
— Mark A. Socinski, MD

For the primary endpoint analysis, patients with EGFR and ALK mutations were excluded. They comprised about 13% of the study participants. When patients with EGFR- or ALK-mutated NSCLC were included in the intent-to-treat analysis, the median overall survival was even higher with ABCP than BCP: 19.8 months vs 14.9 months. Patients with liver metastases also had improved median overall survival with the four-drug regimen over the three-drug regimen (13.2 months vs 9.1 months).

THE INTERNATIONAL, open-label IMpower 150 study sought to answer two questions: Does VEGF blockade enhance the efficacy of immunotherapy, and does immunotherapy combine effectively with chemotherapy. The answer to both questions appears to be “yes.”

The study was conducted at 240 sites in 26 countries. Patients with untreated nonsquamous NSCLC (n = 1,202) were randomized to receive atezolizumab plus carboplatin/paclitaxel (ACP), ABCP, or BCP.

PROGRESSION-FREE survival was also longer in the ABCP group than in the BCP group in the overall intent-to-treat population (including those with EGFR or ALK mutations) and among patients with low or negative PD-L1 expression, those with low Teff gene signature expression, and those with liver metastases.

Compared with the three-drug regimen, the four-drug regimen improved the median progression-free survival in patients with liver metastases: 7.4 months vs 4.9 months. 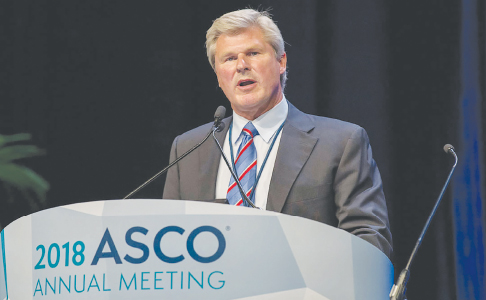 THE SAFETY PROFILE was consistent with the known safety risks of the individual agents, including the rate of hemorrhagic events with bevacizumab. “Most adverse events were transient and limited to the chemotherapy induction phase,” he said.

Treatment-related grade 3 or 4 adverse events occurred in 57% of the four-drug arm and 49% of the three-drug arm. Serious adverse events were reported in 44% and 34%, respectively. The most common grade 3 or 4 immune-related adverse events were rash (2% with ABCP and 1% with BCP) and hepatitis (5% and 1%, respectively). “When you look at these two arms, there is no suggestion that adding anti–PD-L1 therapy to anti-VEGF therapy substantially increases the risk of immune-related events,” Dr. Socinski said.

Based on the IMpower 150 data, a supplemental new drug application has been submitted to the U.S. Food and Drug Administration for the ABCP regimen in nonsquamous NSCLC. ■

“TODAY WE HAVE good news, because IMpower 150 is another clear positive trial on the combination of chemotherapy with immunotherapy. This is true in terms of progression-free and overall survival, which are both statistically significant [for atezolizumab...