In my area of research, lung cancer, precision medicine is indeed transforming the treatment of this disease and has important implications for other cancers and for the future of our patients with cancer. Today’s achievement of being able to systematically identify genomic changes that can be successfully targeted goes back nearly 15 years. And it underscores the importance of well-annotated preclinical models that have played a part in this exciting journey. It’s also one of the early examples of team science that began to transform the treatment of lung cancer a decade and a half ago.

Two of the leaders in this area, John Minna, MD, and Adi Gazdar, MD, were colleagues and mentors at the National Cancer Institute. They led the effort to generate the tumor cell lines from patients with lung cancer treated on our clinical trials. My own contribution was to help annotate the clinical histories of these patients who participated in the trials whose tumors gave rise to permanent cell lines. Generation of these annotated cell lines allowed us to hone in on those tumor cell lines likely to be sensitive to the targeted agents.

The critical clinical observations made by 2004 were that never-smoking women with adenocarcinoma and patients with lung cancer from East Asia were more likely to respond to the targeted agents against the epidermal growth factor receptor tyrosine kinase inhibitors (EGFR TKIs) gefitinib and erlotinib. Table 1, taken from one of our publications, depicts the patients’ age, histology, stage, treatment status, and their survival from the start of protocol therapy. Although not shown in this table, their smoking status and gender were collected as well. I have highlighted NCI-H3255, a cell line from a woman with adenocarcinoma who didn’t smoke.

TABLE 1: Cell Lines From Patients Treated on Trials at NCI

By linking the clinical characteristics with the people who respond to gefitinib and erlotinib and the characteristics of the cell line model, we were able to observe similar biological behavior both in patients and in the preclinical model. By studying these annotated tumor cell lines, we were able to show the preclinical models were more sensitive to this class of drugs—gefitinib, in this case.

The clinical observations prompted me to retrieve the preclinical model H3255. It was established from a woman with adenocarcinoma who had never smoked, information known from the annotation, so we believed the cell line was more likely to be sensitive to the EGFR TKI gefitinib. The growth of the cell line highlighted in Figure 1, H3255, is shifted to your left, meaning the cell line is 100-fold more sensitive to gefitinib than the other cell lines.

FIGURE 1: 2004: Discovery of the Association Between Response to Gefitinib and Erlotinib and Mutations of the EGFR 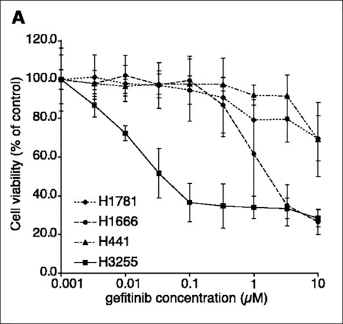 My colleague Pasi Janne, MD, PhD, discovered a DNA mutation in EGFR, now referred to as L858R. Other colleagues Matthew Meyerson, MD, PhD, and William Sellers, MD, sequenced the same domains in EGFR as studied in the cell line in more than 100 lung cancers. They discovered the same EGFR mutation detected in H3255 in three different adenocarcinomas of the lung in patients from Japan, a country where clinical observations showed patients were three times more likely to respond to gefitinib or erlotinib than patients from the United States.

The findings from studying the preclinical models prompted us to study the patients with exceptional responses to gefitinib. Lung cancers were identified from five patients treated at the Dana-Farber Cancer Institute who had dramatic responses to treatment with either gefitinib or erlotinib. One of our first exceptional responders was a patient whose tumor responded for more than 2 years while being treated with gefitinib. All five of the tumors studied from the patients whose tumors responded to gefitinib had mutations in the tyrosine kinase domain of EGFR, while the four patients who did not respond to the EGFR TKI had a wild-type receptor. These observations ultimately contributed to a dramatic shift in the treatment of some patients with lung cancer.

Two other laboratory groups—led by Thomas Lynch, MD, and Daniel Haber, MD, PhD, at Massachusetts General Hospital, and William Pao, MD, PhD, and Harold Varmus, MD, at Memorial Sloan Kettering—made observations in 2004 showing that a total of 25 of 31 patients who responded to gefitinib or erlotinib had sensitizing mutations of EGFR, while those without mutations did not respond. These findings have transformed lung cancer care and these three manuscripts have now been referenced more than 24,000 times.

The first genomic change that could be effectively targeted was the EGFR mutation, which was discovered because:

Hiroyuki Mano, MD, PhD, led the studies that identified the next oncogenic driver in lung cancer to be successfully targeted. Investigators in his laboratory discovered the transforming EML4-ALK fusion gene in five patients with non–small cell lung cancer in 2007. ALK stands for anaplastic lymphoma kinase, because it was initially discovered more than 20 years ago to be translocated in anaplastic lymphomas of childhood. The presence of the translocation in both the anaplastic lymphomas and lung cancers provided compelling evidence that ALK likely played a critical role in the malignant transformation to lung cancer and lymphoma and also identified a potential target for therapy. The preclinical models were once again central for characterizing the potential therapeutic target and the clinical characteristics of the patients from whom these cell lines were critical for identifying the appropriate models to study. NCI-H3122 was established from a female nonsmoker with adenocarcinoma similar to the patient population in which ALK rearrangements are found. The cell line tested positive for an ALK rearrangement, which facilitated additional preclinical studies.

Dr. Janne studied more than 300 tumors and tumor cell lines. 3122 was identified as being sensitive to a drug directed against ALK that eventually became the FDA-approved drug ceritinib. The preclinical xenograft model 3122 shows tumor regressions with increasing doses of the agent directed against the rearranged ALK. Ultan McDermott, MD, PhD, [who was studying] in [the laboratory of] Jeffrey Settleman, PhD, led similar studies with the same drug as well as crizotinib in lung cancer cell lines with ALK rearrangements. The preclinical studies showing dramatic antitumor activity against appropriate cell lines and xenograft models prompted the development of a crizotinib as an agent that has been shown to effective for ALK-positive non–small cell lung cancer and its eventual FDA approval for use in ALK-positive non–small cell lung cancer in 2011.

A trial comparing the outcomes of ALK-positive treated non–small cell lung cancer patients who were given either crizotinib vs single-agent chemotherapy was reported in 2013. Figure 2 depicts the 2-fold prolonged progression-free survival of the patients treated with crizotinib, median 7.7 months, vs those treated with chemotherapy, median 3 months.

FIGURE 2: 2013: Progression-Free Survival of Patients With NSCLC Treated with Crizotinib vs Combination Chemotherapy 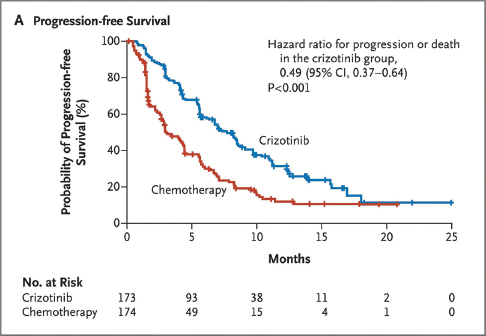 Now, instead of lumping all patients into one group of “non–small cell lung cancer,” as we did as late as 2002, we need to apply our principles of precision medicine and identify different genomic changes that prompt different therapies. I am pleased to say today there are now four different oncogenic drivers for which there are FDA- and EMA-approved targeted therapies. They include EGFR, which makes up 15% of patients, and ALK, which makes up another 5% of patients. Crizotinib for ROS1 was added in 2016, and dabrafenib plus trametinib for BRAF V600E mutations was approved in 2017, each making up another 1%.

The result is that today about 22% of patients with lung cancer can now be treated with oral targeted agents as their initial therapy, rather than combination chemotherapy. This is a dramatic transformation in the past 14 years when everyone used to be treated with chemotherapy. However, there remain another 78% of patients who still need effective agents directed against their cancer. NTRK and RET rearrangements are among the newest genomic changes in lung cancer and other malignancies that will likely have effective agents. Trials presented at the ASCO Annual Meeting in 2017 and 2018 will hopefully bring that total to 25% of patients with lung cancer.

A robust infrastructure in academia, other settings involved in clinical trials, and ongoing pharmaceutical research will continue to be needed to expand the proportion of patients treated with precision medicine. ■

Dr. Johnson delivered his presidential address at the Opening Session of the 2018 ASCO Annual Meeting. In addition to targeted therapy, Dr. Johnson discussed the evolution of immunotherapy for lung cancer and his experience as a prostate cancer survivor. Watch a video of the full presentation and read the complete transcript of the address on connection.asco.org/blogs.