The text and photograph on this page are excerpted from a four-volume series of books titled Oncology Tumors & Treatment: A Photographic History, by Stanley B. Burns, MD, FACS. The photograph below, courtesy of Stanley B. Burns, MD, and The Burns Archive, is from the volume titled “The X-Ray Era 1901–1915.” To view additional photos from this series of books, visit burnsarchive.com.

A few months after William Roentgen’s first publications, x-rays were being produced as stereoroentgenograms. Doctors Emil Beck, James MacKenzie, Charles Leonard, Hildebrand, Walsham, and others used stereoroentgenography during the first decade of the 20th century to study the lungs, heart, and urinary tract, in addition to the ordinary studies of bones and joints. By 1910, this technology was focused on diseases of the stomach and intestines. The stereo format was the preferred method of medical x-ray presentation (examination), as the three-dimensional view allowed accurate determination of an anatomic relationship.

Invented in 1896, the fluoroscope allowed real-time evaluation of the esophagus and stomach actions as well as intestinal peristalsis. In 1898, Walter B. Cannon, MD, introduced the bismuth metal. He had discovered that bismuth was opaque in x-rays and could be used to investigate the intestinal tract. Charles Lester Leonard, MD (1861–1913), one of Philadelphia’s pioneer radiologists, successfully reproduced a stereoroentgenogram of the small intestine. Unfortunately, as many other fellow pioneers in radiology, Dr. Leonard suffered radiation burns and then cancer. He was one of the profession’s early martyrs; he first lost his fingers, then his left hand, and, in 1913, his life. 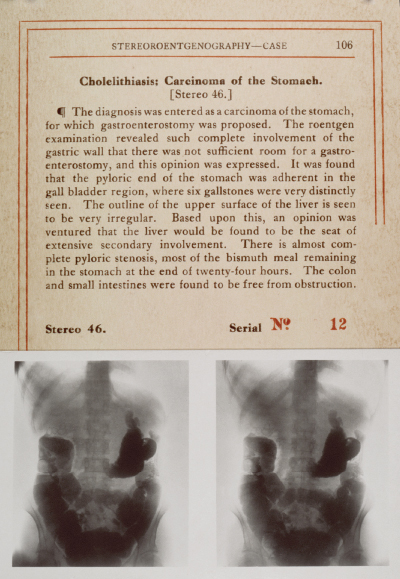 Roentgenologist at the Cook County Hospital, Northwestern University Medical School, and St. Luke’s Hospital, Chicago radiologist James T. Case, MD, was the first to use a bismuth metal in an evaluation of the colon. He stated he was “the first to make the stereoroentgenogram method a routine procedure in the investigation of the stomach and the intestine.” Dr. Case exhibited his stereo photographs in 1910 and, by 1914, was recognized as America’s expert in abdominal stereoroentgenography.

Howard Kelly, MD, asked Dr. Case to share his expertise in his Stereo-Clinic series. Dr. Case presented two volumes with 50 stereo photographs of his work along with his analysis and differential diagnosis of the cases. He included examples of a variety of conditions of the intestinal tract, from the esophagus to the colon. He also documented the effect of aneurysms as well as heart, lung, spine, and infectious disease on the intestinal tract.

A complete page from the Stereo-Clinic series, including the showcased photograph, number 46, is published here to illustrate the format of the books. It should be noted that in this era, chest x-rays were common, as tuberculosis was the number-one killer in the developed world. Dr. Case described his method of preparing the patient, managing the equipment, and making the special x-ray in extreme detail. He explained the practical fabrication:

Lung cancers associated with mining and other occupations were recognized, but ‘primary’ lung cancers were generally believed to be rare tumors. It was not until the 1920s that bronchoscopies and better x-rays helped delineate the true extent of the disease. The surgical treatment of cancer of the lungs began in 1928, when the lobectomy procedure was refined. In 1933, the first single-stage pneumonectomy for lung carcinoma was performed. ■