At the end of June, Allen S. Lichter, MD, FASCO, retired after serving as ASCO’s Chief Executive Officer (CEO) for 10 years. To honor his commitment and contributions to ASCO and recognize his lasting impact on the field of oncology, the Society has created a new Special Award, the Allen S. Lichter Visionary Leader Award and Lecture.

The award will first be presented at the 2017 ASCO Annual Meeting in Chicago and will recognize ASCO members who have transformed the oncology field or significantly advanced the mission of ASCO, the Conquer Cancer Foundation, or CancerLinQ, LLC, through their leadership, vision, and ability to inspire.

“In the past decade, Allen has firmly established ASCO as the world’s leading oncology organization for medical professionals,” said Dr. Vose. “He has guided us through some of the most revolutionary and game-changing growth opportunities ASCO has ever seen. He has mentored, nurtured, and inspired so many of us in this room today—myself included—and all the while he has remained focused on our collective commitment to improving the lives of people with cancer.”

A Background of Excellence, at ASCO and Beyond

An ASCO member since 1980, Dr. Lichter served the Society in several prominent volunteer roles, including President (1998–1999) and Founding Chairman of the Conquer Cancer Foundation Board of Directors (1999), before accepting the position of CEO in 2006. In his 10 years as CEO, Dr. Lichter has overseen the rapid growth of the Society and the launch of important new initiatives to improve the quality and value of cancer care. During Dr. Lichter’s tenure as CEO, ASCO reached more than 40,000 members, including more than 13,000 international members and many allied health professionals.

His many significant contributions include the launch of CancerLinQ™, ASCO’s groundbreaking health information technology platform that harnesses big data from millions of patient records to deliver high-quality, personalized care to people with cancer and cancer survivors; the Targeted Agent and Profiling Utilization Registry (TAPUR) study, the Society’s first-ever clinical trial that addresses gaps in the understanding of and access to targeted therapies; the creation of the Leadership Development Program to ensure strong leadership in oncology for future generations and FASCO designation for members with standout volunteer service; the hiring of the organization’s first Chief Medical Officer; and the establishment of several important new departments to support the diverse needs of ASCO members. Each of these accomplishments is a testament to Dr. Lichter’s commitment to improving the lives and meeting the needs of patients with cancer, their families, and their caregivers. 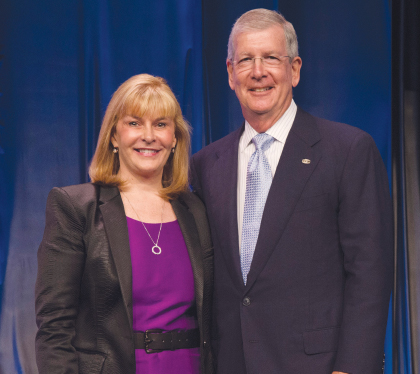 Prior to becoming the CEO of ASCO, Dr. Lichter held leadership roles at the University of Michigan (Chair and Professor of Radiation Oncology [1984–1998] and Dean of the Medical School [1998–2006]) and at the National Cancer Institute (Director of the Radiation Therapy Section of the Radiation Oncology Branch). His research, focusing on better defining radiation doses to spare normal, healthy tissue in patients with cancer, has contributed to radiation treatment planning standards around the world. In 2002, he was elected to membership in the Institute of Medicine of the National Academies of Science. He has received Gold Medals from the American Society for Radiation Oncology and the Radiological Society of North America in recognition of his contributions to cancer research, education, and clinical care, as well as leadership of his peers in clinical oncology.

The Allen S. Lichter Visionary Leader Award will continue Dr. Lichter’s legacy by encouraging and recognizing other extraordinary leaders in oncology. The annual award lecture will be delivered at the ASCO Annual Meeting, with the inaugural lecture taking place in 2017. ■