Pacritinib for Myelofibrosis: Effective in Patients With Thrombocytopenia 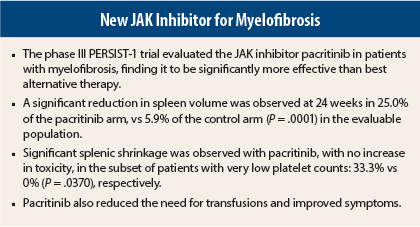 An emerging JAK inhibitor, pacritinib, appears not only effective in a broad population of patients with myelofibrosis but also among a subset with very low platelet counts, investigators from the global phase III PERSIST-1 trial reported at the 2015 ASCO Annual Meeting.1

“There is a huge unmet clinical need for patients with myelofibrosis,” said Ruben A. Mesa, MD, Deputy Director of the Mayo Clinic Cancer Center, Scottsdale, Arizona. “Symptoms of myelofibrosis have a substantial negative impact on both patient quality of life and overall survival.”

This need is especially felt among patients with very low platelet counts (< 50,000/µL), who tend to have shorter survival and are at increased risk for leukemic transformation. The one Food and Drug Administration (FDA)-approved agent, the JAK inhibitor ruxolitinib (Jakafi), is not considered safe for patients with low platelet counts, Dr. Mesa indicated. “There’s nothing for this population that is really efficacious,” he noted. “Individuals with counts < 50,000/µL are likely getting it in modest doses that probably impact efficacy.”

“Current treatments have not demonstrated the ability to simultaneously improve splenomegaly, symptoms, and cytopenias in myelofibrosis patients,” he pointed out.

“Pacritinib has activity in persons who do not have current treatments available, in particular, those with significant thrombocytopenia,” he said. “The endpoint with pacritinib was vastly superior in both the intent-to-treat and evaluable treatment arms. There were no responders in the best available treatment arm. The efficacy was similar in the broader group with < 100,000/µL.”

The median duration of treatment was 16.2 months in the pacritinib arm and 5.9 months with the best available treatment. In the control arm, 74.5% received active treatment in the control arm (25.5% were watch and wait), including erythropoietin-stimulating agents, immunomodulatory drugs, hydroxyurea, and others.

In other endpoints, additional benefits were observed with pacritinib, as described here for the evaluable patient population:

Overall survival data are premature, but a landmark analysis at week 24 found that spleen shrinkage was associated with improved survival in the pacritinib arm but not in the control arm. “This highlights the importance of splenic reduction in impacting outcomes,” according to Dr. Mesa.

The most common toxicities with pacritinib were diarrhea, nausea, and vomiting, which were generally mild and resolved within 1 week. Few patients discontinued the drug due to side effects.

The ongoing phase III PERSIST-2 trial is exploring pacritinib in patients with low platelet counts due to their disease or therapy. ■

Lloyd Damon, MD, Professor of Medicine at the University of California, San Francisco, discussed the study and noted that although ruxolitinib (Jakafi) is associated with a fair amount of anemia and thrombocytopenia, pacritinib did not increase these conditions in PERSIST-1. In fact, treatment was...