Oncolytic Immunotherapy in Melanoma: It’s Not All About PD-1 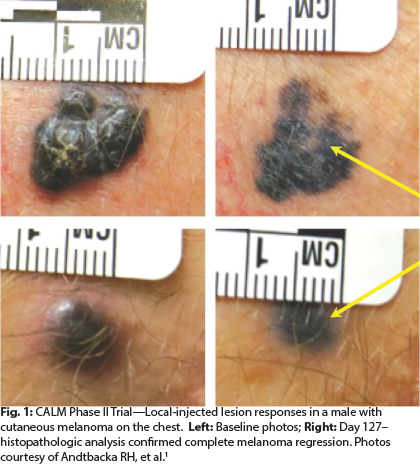 Oncolytic immunotherapies represent a new important strategy in the treatment of cancer.

The benefit from immune-directed therapies in patients with advanced melanoma is not limited to the exploding field of checkpoint inhibitors. According to Robert Andtbacka, MD, Associate Professor of Surgical Oncology, at the Huntsman Cancer Institute at the University of Utah, Salt Lake City, intralesional oncolytic therapy also provides benefit, which can be profound for some patients.

“Oncolytic immunotherapies represent a new important strategy in the treatment of cancer,” he said at the American Society of Gene and Cell Therapy, where he described several emerging approaches now in phase II and III clinical trials. Dr. Andtbacka has been directly involved in many of these studies.

Oncolytic immunotherapies work not only through a lytic effect but by activating the entire immune system, “not just in lesions we treat, but elsewhere in the body.” He noted that intralesional therapies are tailor-made for local and in-transit cutaneous lesions and the accessible lymph nodes of melanoma.

Intralesional oncolytic immunotherapies aim to achieve a local ablative effect as well as a systemic immune effect, the so-called bystander response. They may also help to prevent the development of visceral metastases, if given early, he predicted. Durable responses with limited toxicity are additional goals.

A dozen or so types of intralesional agents are in development: antibodies, cytokines, glycolipids, microspheres, plasmids, small molecules, radiosensitizers, vaccines, viruses, xeno-antigen cell lines, and combinations of these agents. Most are early in the pipeline, but data from phase II and III trials have become available for some of them.

In his talk, Dr. Andtbacka focused on talimogene laherparepvec (T-VEC; a modified herpes simplex type 1 virus), plasmid interleukin-12 (IL-12) electroporation, PV-10 (rose bengal), and coxsackievirus A21 (CVA21), but they are just a few of the many agents in the pipeline.

In April 2015, the U.S. Food and Drug Administration’s (FDA’s) Oncologic Drugs Advisory Committee (ODAC) and Cellular, Tissue, and Gene Therapies Advisory Committee (CTGTAC) voted to recommend approval of T-VEC for advanced melanoma. The FDA is expected to make a final decision in October.

In the phase III OPTiM trial, 436 patients had lesions injected with either T-VEC or granulocyte macrophage colony-stimulating factor (GM-CSF). The primary endpoint, durable response (continuous response for ≥ 6 months), was achieved by 16.3% with T-VEC vs 2.1% with the control, a 14.1% difference (P < .0001).1

“This durable response rate is an unusual endpoint and very stringent,” he noted. “For comparison, if we had used this in trials of BRAF inhibitors, the endpoint would not have been achieved.”

Among the injected lesions, 64% responded, of which 47% were complete responses to T-VEC, as did 34% of noninjected (nonvisceral) lesions. Two-thirds had responses lasting at least 1 year. Patients who responded best were those with earlier stage disease (IIIB/C or IV M1a vs IV M1b/c), for whom median overall survival was 41 months with T-VEC vs 21 months with the control (P < .001).

T-VEC also reduced the development of visceral metastases, boding well for the use of this agent earlier in the disease. Therefore, a phase II neoadjuvant study is evaluating T-VEC in 150 resectable stage IIIB/C/IV M1a patients. In this study, patients will be randomized 1:1 to either surgery (the current standard of care) or T-VEC for 3 months followed by surgery. The primary endpoint is 2-year recurrence-free survival.

A phase Ib study has also evaluated T-VEC in combination with ipilimumab (Yervoy) in previously untreated stage III/IV patients, showing responses in 56% of patients and complete responses in 33%.2 Toxicity was not increased with the combination compared with what is seen with single agents.

“This study shows we can use these agents in combination, which is ultimately what we need to think about,” said Dr. Andtbacka. “There are a number of treatments moving forward in combination.”

Intratumoral electroporation is a means of enhancing cell permeability—via an electrical current delivered into the tumor—which facilitates entry of plasmid IL-12. In a phase II study of 85 lesions, 53% of injected sites responded (with 31% stabilized), as did 59% of uninjected lesions.3 A randomized clinical trial is underway.

PV-10 is a fluorescent compound that accumulates in the lysosome of cancer cells and leads to acute autophagy, lysis of cells, and exposure of antigenic tumor fragments to antigen-presenting cells. In a phase II study of 80 patients, 51% of target lesions responded, as did 33% of nontarget lesions. The median progression-free survival was 11.4 months in responders and 4.1 months in nonresponders.4

CVA21 gains access to cells by binding to the intercellular adhesion molecule 1 (ICAM-1) protein expressed by the cancer cell. Within the cell, the virus replicates, tumor cells are lysed, and the immune system is activated.

In the phase II CALM study,5 in which patients received multiple injections of CVA21 over 48 weeks, more than 38% of patients were progression-free at 6 months, meeting the study’s primary endpoint. Responses were observed in both localized disease and visceral metastases, and there were no grade 3/4 toxicities.

“After multiple injections, cutaneous lesions are flattened out. We see pigmentation but no melanoma left in the lesion,” observed Dr. Andtbacka (see Fig. 1).

Patients often develop neutralizing antibodies to the virus, “but even in the presence of this, we saw responses, which indicates these responses are likely immune-mediated and not just working by a direct lytic effect on the tumor,” he added. Based on the biopsies of lesions before and after injection, he believes CVA21 is capable of “rebooting” the immune system after patients stop responding to other treatments. ■

Conditioning Intensity for Allogeneic Transplantation in Patients With AML

Tari A. King, MD, on Molecular Differences Between Primary and Metastatic Breast Tumors