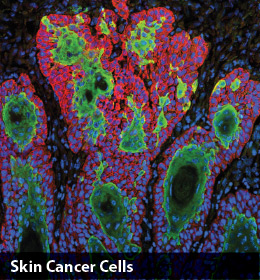 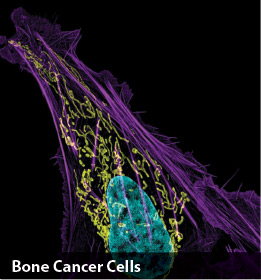 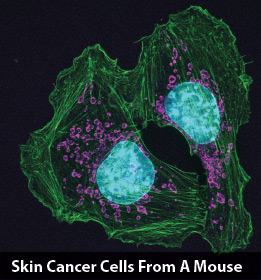 3. Skin Cancer Cells From A Mouse Show How Cells Attach at Contact Points 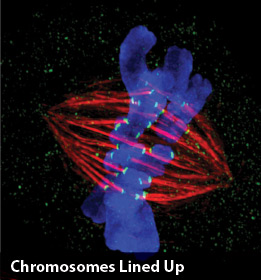 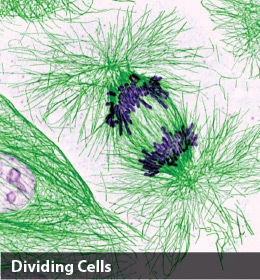 We wanted to show the importance of basic, fundamental science in creating the foundation that leads to new therapies and other medical advances.

On June 10, Life: Magnified, an eye-catching photo exhibit of scientific images, opened at Washington Dulles International Airport’s Gateway Gallery in Chantilly, Virginia. The exhibit features 46 high-resolution backlit images of cells from the body, including the brain, blood, eye, skin, liver, and muscle, as well as cells from bacteria and viruses magnified 50,000 times using the latest microscopy techniques. The brilliant colors in the images show cells that have been dyed with chemicals to allow scientists to study structures within the cells. Each image is accompanied by a descriptive caption, and the result is a stunning display of scientific research and the medical advances it produces (see images at left).

Cosponsored by the National Institutes of Health’s National Institute of General Medical Sciences (NIGMS), the American Society for Cell Biology, and the Metropolitan Washington Airports Authority Arts Program, the 46 images in the exhibit were culled from more than 600 submitted by researchers from 17 states across the United States and also include images submitted by researchers from Germany, Singapore, and Spain. Each of the images depicts how the study of different cell types contributes to the understanding of human health and show in detail how abnormal cell growth can lead to diseases like cancer. The exhibit represents research funded by NIGMS and nine other NIH institutes.

“The idea of the exhibit was to find a way to bring science to the public to draw them into science through its beauty and give people a chance to stop and think about the relevance of the images they are seeing and the research that created them to eventually curing diseases,” said Jon R. Lorsch, PhD, Director of NIGMS. “We wanted to show the importance of basic, fundamental science in creating the foundation that leads to new therapies and other medical advances.”

The display of Life: Magnified is located along Concourse C at Washington Dulles International Airport, a two-level walkway that accommodates about 2.5 million passengers each year.

“I am particularly eager to see young people get excited about science when they see the exhibit,” said Dr. Lorsch. “I have an image of a young girl with a suitcase walking with her parents and stopping at the photos and asking, ‘What’s that?’ and becoming excited about science and medicine. It would be terrific if Life: Magnified could have that catalyzing effect on people, especially young people.”

Life: Magnified is on display through November 2014. Once the exhibit closes at Washington Dulles International Airport, some of the images may go on display at the National Institutes of Health, according to Dr. Lorsch. ■

2.  Bone Cancer Cell (nucleus in light blue)—This image shows an osteosarcoma cell with DNA in blue, mitochondria in yellow, and actin filaments, part of the cellular skeleton, in purple. One of the few cancers that originate in the bones, osteosarcoma is extremely rare, with less than 1,000 new cases diagnosed each year in the United States. Photo created by Dylan Burnette, PhD, and Jennifer Lippincott-Schwartz, PhD, Eunice Kennedy Shriver National Institute of Child Health and Human Development, National Institutes of Health.

3. Skin Cancer Cells From a Mouse Show How Cells Attach at Contact Points—These skin cancer cells come from a mouse. The two cells shown here are connected by actin (green), a protein in the cellular skeleton. Actin is required by many cells for normal movement, but it also enables cancer cells to spread to other parts of the body. Photo created by Catherine Galbraith, PhD, and James Galbraith, PhD, Oregon Health and Science University, Knight Cancer Institute.

4. Chromosomes (Blue) Lined Up for Cell Division—This cell is preparing to divide. Two copies of each chromosome (blue) are lined up next to each other in the center of the cell. Next, protein strands (red) will pull apart these paired chromosomes and drag them to opposite sides of the cell. The cell will then split to form two daughter cells, each with a single, complete set of chromosomes. Photo created by Jane Stout, Indiana University.

5. Dividing Cells Showing Chromosomes (Purple) and Cell Skeleton (Green)—This pig cell is in the process of dividing. The chromosomes (purple) have already replicated and the duplicates are being pulled apart by fibers of the cell skeleton known as microtubules (green). Studies of cell division yield knowledge that is critical to advancing understanding of many human diseases, including cancer and birth defects. Photo created by Nasser Rusan, PhD, National Heart, Lung, and Blood Institute, National Institutes of Health.

Five of the images and their captions from Life: Magnified are published here. To view the full exhibit, visit the NIGMS’ website at www.nigms.nih.gov/education/life-magnified/pages/default.aspx.