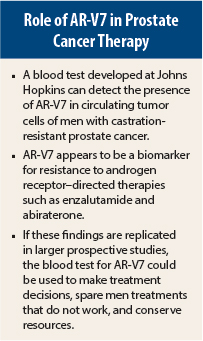 If these results are supported by larger studies, detection of AR-V7 in circulating tumor cells may be used as a biomarker to predict resistance to enzalutamide, abiraterone, and AR-targeted agents, facilitate treatment selection, and fuel the development of AR N-terminal domain inhibitors.

Androgen receptor (AR) splice variant 7 (V7) appears to be a new biomarker for response and disease progression in patients treated with enzalutamide (Xtandi) or abiraterone (Zytiga). The presence of AR-V7 in circulating tumor cells predicted resistance to both drugs in men with metastatic castration-resistant prostate cancer in a study presented at the 2014 ASCO Annual Meeting in Chicago.1

The ASCO study comes on the heels of the first public report on AR-V7 in metastatic castration-resistant prostate cancer treated with enzalutamide, which was presented at the 2014 Annual Meeting of the American Association for Cancer Research (see the May 15 issue of The ASCO Post, page 14).

Both enzalutamide and abiraterone target the androgen receptor. It is not yet clear whether AR-V7 would predict poor response to other therapies used for metastatic castration-resistant prostate cancer that are not directed at AR, such as sipuleucel-T (Provenge) or radium-223 (Xofigo).

Use of a simple blood test to detect AR-V7 has the potential to streamline therapeutic decision-making and steer patients who test positive for AR-V7 to other therapies that may be more effective. This test also has the potential to facilitate more prudent use of health-care resources.

Dr. Antonarakis and colleagues will continue to study AR-V7, but he said the blood test is not yet ready for routine use. “Before we are ready to use AR-V7 status to make treatment decisions, we would first like to obtain CLIA certification for our assay, as well as to validate our results using larger enzalutamide/abiraterone datasets with available clinical samples for analysis. Hopefully, our findings will be replicated very quickly by other multiple groups as well,” he said in an interview with The ASCO Post.

“At this time,” he continued, “it would probably be unwise to withhold enzalutamide or abiraterone from patients who test positive for AR-V7. But if such patients are offered these drugs, they should be monitored very closely for signs of progression, and the treating clinician should have a low threshold for switching these patients to alternative treatments, such as chemotherapies or radiotherapies.”

Although there are a number of AR splice variants, studies by Dr. Antonarakis and others suggest that AR-V7 is the most important one. The expression of AR-V7 is increased 20-fold in metastatic castration-resistant prostate cancer, and it can be detected in clinical samples.

The study he reported at the Annual Meeting included men with castration-resistant prostate cancer who were about to begin treatment with enzalutamide (n = 31) or abiraterone (n = 31). Circulating tumor cell samples were collected at baseline, at the time of response to either drug, and at the time of resistance to either drug. The two-part test used to detect AR-V7 included the Adna Test Prostate Cancer Select kit (to isolate circulating tumor cells) and the Adna Test Prostate Cancer Detect kit (AdnaGen, Langenhagen, Germany). Outcomes were prostate-specific antigen (PSA) response rate (> 50% PSA decline), PSA progression-free survival, clinical/radiographic progression-free survival, and overall survival (which is still premature).

In the enzalutamide cohort, 38.7% were AR-V7–positive and 61.3% were AR-V7–negative. Overall, about two-third of patients had received previous abiraterone and docetaxel and about one-third had visceral metastasis (the percentages of patients with these characteristics were much higher among AR-V7–positive patients).

Dr. Antonarakis pointed out that these results suggest that detection of AR-V7 is associated with both primary and acquired resistance to enzalutamide and abiraterone.

He and his co-investigators plan to incorporate their blood-based AR-V7 assay into prospective clinical trials of enzalutamide and abiraterone, as well as into prospective trials of novel agents that may have activity against the AR-V7 splice variant. ■

Disclosure: Dr. Antonarakis is a paid consultant and advisor to Janssen Biotech and Astellas/Medivation. He has received research funding from both companies.

The magic of this research is that it requires a liquid biopsy [circulating tumor cells in the blood]—a simple blood collection,” said Eleni Efstathiou, MD, PhD, Associate Professor at The University of Texas MD Anderson Cancer Center, Houston, commenting on the study presented by Antonarakis and...