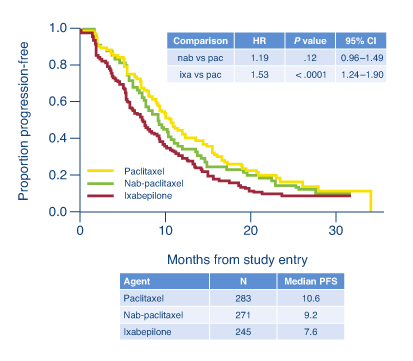 In the treatment of metastatic breast cancer, established older agents outperformed newer, more expensive drugs in two studies that made news at the 2012 ASCO Annual Meeting.

The study aimed to determine if these newer microtubule inhibitors given on a weekly schedule would result in similar or superior effectiveness, and be less toxic, than standard weekly paclitaxel. One objective, she added, was to validate previous phase II results showing nab-paclitaxel at 150 mg/m2 weekly was the optimal dose.2

The regimens were paclitaxel at 90 mg/m2, nab-paclitaxel at 150 mg/m2, and ixabepilone at 16 mg/m2, each given weekly on a 3-weeks-on/1-week-off schedule. Bevacizumab (Avastin) at 10 mg/kg every 2 weeks was also administered to 98% of the patients.

The investigators concluded that at these doses and schedules, the newer agents offer no advantage, but they do increase toxicity. At a median follow-up of 12 months, median progression-free survival was 10.6 months with weekly paclitaxel, 9.2 months with nab-paclitaxel, and 7.6 months with ixabepilone (nab-paclitaxel vs paclitaxel: HR = 1.19; P = .12; ixabepilone vs paclitaxel: HR = 1.54; P < .0001; see Fig. 1). Overall survival was not significantly different among the arms, with approximately 50% of patients alive at 2 years.

“These data suggest that similar patients should be treated with paclitaxel on a weekly schedule,” Dr. Rugo said.

Dr. Rugo emphasized that nab-paclitaxel still has a role in metastatic breast cancer—though perhaps a more limited one. “In situations where I already use nab-paclitaxel, I will continue to use it. In fact, I have patients who could not have received curative therapy without this as an option. But I had not jumped on the bandwagon to treat with 150 mg/m2, and now we know there is no reason to do so because it is more expensive and more toxic,” she said in an interview with The ASCO Post.

The role for nab-paclitaxel is in the treatment of patients who are intolerant to mandatory steroids and, perhaps, in patients whose disease recurs within a year of receiving paclitaxel, she said.

“The study demonstrates,” she said, “that we should not simply assume that newer drugs are always better than the standard therapies.” Correlative studies will help determine if patients with specific tumor subsets will fare better with one regimen vs another one.

In another study of metastatic breast cancer, trastuzumab (Herceptin) came out ahead of lapatinib (Tykerb). The interim results of the phase III MA.31/GSK EGF 108919 trial were so striking, in fact, that the study was closed early.3

Canadian investigators compared lapatinib given with taxane-based treatment (weekly paclitaxel or docetaxel every 3 weeks) for 24 weeks followed by monotherapy with lapatinib until disease progression vs trastuzumab plus taxane therapy for 24 weeks followed by monotherapy with trastuzumab until progression, in 652 patients. Median progression-free survival for the lapatinib arm was 8.8 months, compared with 11.4 months with trastuzumab, indicating a 33% increased risk of progression with lapatinib (P = .01). In women with centrally confirmed HER2-overexpressing tumors, the difference between the arms actually approached 5 months (P = .003), although overall survival differences have not been observed, reported Karen A. Gelmon, MD, of the British Columbia Cancer Agency. Lapatinib therapy was associated with more adverse events than trastuzumab.

Gunter von Minckwitz, MD, PhD, of the German Breast Group and the University of Frankfurt, Germany, said the findings add to an increasing body of evidence that lapatinib is not as active as trastuzumab in a number of breast cancer settings, perhaps because of the rapid development of secondary resistance after “initial high efficacy.” Greater toxicity may also be an in issue, but he maintained, “the therapeutic window appears to be wide.” Dual blockade of the HER2 pathway appears to be the most promising approach, and studies of these combinations are eagerly awaited. ■

“Our old friends are sometimes worth keeping, and that is certainly true for weekly paclitaxel,” said the invited discussant of CALGB 40502, Kathy Miller, MD, of Indiana University School of Medicine, Indianapolis, at the ASCO Annual Meeting.

She noted that Dr. Rugo must “remain strict to the...