The findings from a phase I study of crizotinib in non–small cell lung cancer (NSCLC) were presented in a Plenary Session at the 2010 ASCO Annual Meeting—an unusual event, since such early-phase data are not generally the topic of plenary sessions. The study showed that a majority of mostly pretreated patients bearing rearrangements of the anaplastic lymphoma kinase (ALK) gene had response or stable disease with crizotinib treatment. ALK rearrangements appear to be present in approximately 5% of patients with NSCLC, suggesting that some 10,000 new cases of NSCLC with ALK rearrangements may occur each year in the United States.

Since the announcement of results of the phase I study at the 2010 ASCO Annual Meeting, FDA has fast-tracked the new drug application (NDA) for crizotinib; the rolling submission of the NDA was recently completed. A phase III trial has been initiated to assess crizotinib vs standard-of-care therapy in ALK-positive patients for whom one prior platinum-based treatment has failed. There is considerable excitement over the potential for ALK rearrangements to define a subgroup of tumors in NSCLC and other cancers. 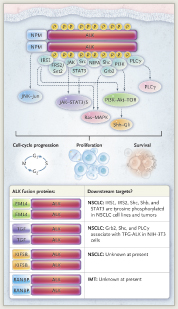 Activating mutations or translocations of the ALK gene have been identified in several types of cancer in addition to NSCLC, including anaplastic large-cell lymphoma, neuroblastoma, and inflammatory myofibroblastic tumor. These alterations lead to activation of ALK, a tumor-specific protein involved in tumor cell growth and survival signaling pathways; inhibition of ALK can block these pathways, leading to stabilization or regression of tumors. The genetic rearrangements are evident in oncogenic fusion genes, including EML4-ALK, which is found in NSCLC. This aberrant fusion gene encodes a cytoplasmic chimeric protein with constitutive kinase activity. Multiple EML4-ALK chimeric variants have been identified (representing different breakpoints in various EML4 exons), with all being transforming in vitro.

In the phase I study of crizotinib, although all patients had ALK rearrangements, not all patients could be identified as harboring EML4-ALK. Other, rarer fusion partners for ALK have been found in NSCLC, including KIF5B and TFG. Numerous potential downstream targets of EML4-ALK and TGF-ALK fusion proteins involved in cell-cycle progression, proliferation, and survival have been identified (Fig.1). In NSCLC, EML4-ALK rearrangements are more common in never-smokers or those with a history of light smoking and in those with adenocarcinomas. ALK gene rearrangements are rarely coincident with EGFR, HER2, or KRAS mutations, indicating that these rearrangements define a distinct disease subtype that is not likely to respond to inhibitors of the other targets.

Crizotinib is a first-in-class selective, ATP-competitive, oral small-molecule inhibitor of ALK and c-Met/ hepatocyte growth factor receptor (HGFR) tyrosine kinases and their oncogenic variants (eg, ALK or c-Met/HGFR mutant variants). Crizotinib shows dose-dependent inhibition of phosphorylation of ALK and c-Met/HGFR and selected variants as well as inhibition of their kinase target-dependent functions in tumor cells both in vitro and in vivo. Crizotinib exhibits potent and selective growth inhibitory activity against tumor cells exhibiting amplification of the c-Met/HGFR gene locus or translocation/inversion of the ALK gene locus—eg, EML4-ALK or NPM-ALK fusion variants.

Complete data from the phase I study were reported by Kwak and colleagues in a 2010 New England Journal of Medicine article.1 In this study, 82 patients with advanced NSCLC who were fluorescence in situ hybridization (FISH)-positive for ALK rearrangements received crizotinib in escalating doses of 50 mg once daily to 300 mg twice daily (primarily 250 mg twice daily). Patients (52% male) had a mean age of 51 years, 94% had received at least one prior therapy for NSCLC, 96% had adenocarcinoma, and 76% had never smoked. 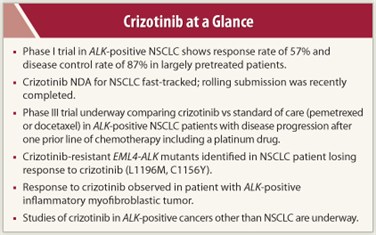 Of 82 patients, 46 had a confirmed partial response and 1 had a complete response, for an overall response rate of 57%. An additional 27 (33%) had stable disease (including 5 with an unconfirmed partial response). The 8-week disease control rate was 87% (71 of 82 patients). All patient samples tested for MET amplification were negative, indicating that the MET inhibitory activity of crizotinib was not a determinant of response in these patients. Grade 1 nausea and diarrhea were the most common side effects, and visual disturbance occurred in 41% of patients. Grade 3 or 4 adverse events consisted of ALT elevation and AST elevation in 6% of patients each, lymphopenia in 2%, and hypophosphatemia, neutropenia, hypoxia, pneumonitis, and pulmonary embolism in 1% each. After a median follow-up of 6.4 months, the estimated 6-month progression-free survival was 72%.

A number of other trials of crizotinib in ALK-positive NSCLC are underway. A large single-arm, open-label phase II study (PROFILE 1005) of crizotinib 250 mg twice daily in patients with advanced NSCLC who have received previous treatment is underway (clinicaltrials.gov identifier NCT00932451). The target enrollment is 400 patients. The primary outcome measures are objective response rate and safety.

A pivotal phase III randomized, open-label trial (PROFILE 1007) is comparing crizotinib (250 mg twice daily continuously) vs standard-of-care therapy consisting of pemetrexed (500 mg/m2 IV on day 1 of 21-day cycle) or docetaxel (75 mg/m2 IV on day 1 of 21-day cycle) as second-line treatment in patients with disease progression after chemotherapy that included a platinum drug (clinicaltrials.gov identifier NCT00932893). Target enrollment is 318 patients. The primary outcome measure is progression-free survival. Patients in whom disease progresses on standard-of-care treatment are eligible to cross over to crizotinib treatment in the phase II trial described above.

Other studies of crizotinib in NSCLC that are currently recruiting patients include a phase I/II study of the addition of crizotinib to erlotinib (clinicaltrials.gov identifier NCT00965731). In a phase III trial, crizotinib is also being compared with pemetrexed plus carboplatin or cisplatin in previously untreated patients with ALK-positive non-squamous cell carcinoma of the lung (clinicaltrials.gov identifier NCT01154140).

Two other reports on crizotinib during the past year are of interest. Choi and colleagues2 identified two mutations in EML4-ALK—C1156Y and L1196M—that confer resistance to crizotinib, both being identified in a patient with NSCLC who had an initial strong response to crizotinib. The L1196M mutation represents a mutation of the gatekeeper residue of the ALK kinase domain (similar to T790M EGFR and T315I ABL drug-resistance mutations) that could prevent crizotinib binding to ALK. Although it would not appear to have a direct effect on crizotinib binding, the effect of the C1156Y mutation is at present unclear.3

The mutants identified by Choi et al were less sensitive to crizotinib than wild-type EML4-ALK in cell culture, consistent with the loss of clinical response in the NSCLC patient. The loss of sensitivity of the C1156Y variant to crizotinib was greater in vivo than in vitro, indicating that resistance associated with this mutation may involve interaction with additional cell factors. The absence of response to crizotinib in patients in the phase I trial may be related to development of or selection for resistance mutants, raising the likelihood that additional ALK inhibitors will be needed to target crizotinib-resistant disease.

Another report describes a sustained partial response to crizotinib in a patient with an abdominopelvic inflammatory myofibroblastic tumor with an ALK rearrangement (RANBP2-ALK fusion) and no response in another patient with inflammatory myofibroblastic tumor and no ALK rearrangement.4 In the responding patient, who had received prior treatment, response was substantial and rapid and persisted for at least 6 months despite a heavy tumor burden.

Crizotinib is being evaluated in a number of settings outside of lung cancer. A phase I study is assessing crizotinib in patients with ALK-positive tumors other than NSCLC (clinicaltrials.gov identifier NCT01121588). A phase I/II study is examining crizotinib in children with ALK-positive relapsed/refractory solid tumors, primary CNS tumors, and anaplastic large cell lymphoma (clinicaltrials.gov identifier NCT00939770). ■