On William Osler: The Old Art and the New Science

William Osler (1849–1919) is one of the most revered physicians in the history of medicine. He was an outstanding clinician who emphasized bedside teaching, hard work, medical history, and lifelong learning.1 As Professor of Medicine at four institutions in three countries, he exerted a profound influence on medical education. A prolific writer, his textbook became the most popular and widely read treatise on medicine in the world. Osler blended the art and science of medicine perhaps as well as anyone and remains a valuable role model for students and physicians. Osler’s career had an impact on many branches of medicine, including the fields of hematology and oncology.

Osler learned to use the microscope as a schoolboy. His first publication, entitled Christmas and the Microscope, appeared in 1869. While still a medical student, his first clinical paper described the gross and microscopic findings in a patient with breast cancer. By the time he received his MD degree from McGill University, Osler was an accomplished microscopist. He used this skill to great advantage in postgraduate studies and became a staunch advocate of the value of the microscope in medicine. Osler taught microscopy to medical students at McGill, brought the first microscope to the University of Pennsylvania Hospital, and established the Clinical Microscopy Laboratory at Johns Hopkins.

Achievements in Hematology and Oncology 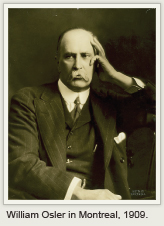 Osler’s contributions to hematology and oncology, although only a small portion of his massive legacy, were indeed substantial.2 He was among the first to recognize platelets as the third formed element in the blood and identified their role in thrombosis. He made important contributions to the study of pernicious anemia including observations on gastric atrophy and description of characteristic red cell morphologic changes in peripheral blood and bone marrow. Osler’s description of polycythemia vera in 1903 was a landmark report that led to an increased diagnosis of this entity. The same was true of his clinical description of hereditary hemorrhagic telangiectasia (Osler-Weber-Rendu disease).

After some missteps, Osler confirmed Laveran’s description of organisms in the blood of patients with malaria and helped convince the medical community of their diagnostic importance. Moreover, in Philadelphia and later in Baltimore, blood films were examined in all cases of fever and then routinely.

Osler performed over 1,000 autopsies. His knowledge of gross and microscopic pathology provided him with broad understanding of the natural history of disease. Osler’s monographs on abdominal tumors and cancer of the stomach were key clinical contributions to the literature.3,4 His lectures on abdominal tumors, delivered in 1893, summarized 67 cases with extensive clinical as well as surgical and autopsy findings.

Osler and Thomas McCrae reviewed 150 cases of cancer of the stomach seen at Johns Hopkins in an encyclopedic fashion. Surgery was often recommended for definitive diagnosis and early treatment. The close interaction between Osler and William Halsted at Johns Hopkins was perhaps one of the earliest examples of multidisciplinary management, which has proved to be such a valuable approach in oncology. “To attain the best possible results the physician and surgeon must cooperate.”4

Osler made another contribution that surely surpassed all of his others: Ever the clinician microscopist, he introduced diagnostic microscopy into North American medicine. Laboratory observations were an extension of those made at the bedside. Proficiency with the microscope was considered as important as accurate auscultation. Osler brought the microscope to the clinic, enabling physicians to arrive at precise diagnoses and rational therapy for patients. The impact of clinical microscopy had an important role in defining etiology and pathogenesis of blood disorders and solid tumors.

What if Osler were alive today? He would no doubt continue to underscore the importance of hard work, close observation, a practical approach to the day’s activities, and ongoing education. Osler welcomed advances in medicine and quickly applied them to the care of his patients—whether it was the use of newly described stains in interpretation of blood smears or urging the Johns Hopkins Board to acquire an x-ray machine within a few months of Roentgen’s discovery. It seems likely Osler would be squarely in the forefront of today’s progress in scientific medicine. But he would constantly remind us that “the old art cannot possibly be replaced by, but must be absorbed in, the new science.” ■

Many of Osler’s precepts and teachings are as applicable today as they were a century ago. Their universality and timeless relevance are guideposts. Some of his frequently cited aphorisms include: