Results are at odds with earlier positive findings.

As reported in the March 15 issue of The ASCO Post, a phase III trial of the novel agent iniparib failed to demonstrate a significant improvement in survival for women with metastatic triple-negative breast cancer. The “top-line” results were communicated in the spring via press releases from Sanofi-aventis and BiPar Sciences, but the full results were withheld until the ASCO Annual Meeting.

Iniparib provokes cell-cycle arrest in the G2/M phase and induces double-strand DNA damage but does not inhibit poly (ADP-ribose) polymerase (PARP) 1 and 2 at physiologic drug concentrations—though it is often referred to as a PARP inhibitor. In the previous randomized phase II study,1 the addition of iniparib to gemcitabine/carboplatin therapy improved response rates, progression-free survival, and overall survival in 123 women with metastatic triple-negative breast cancer.  Overall survival, in fact, nearly doubled, from 7.7 months with gemcitabine/carboplatin to 12.3 months with the addition of iniparib.

The blockbuster-level findings fueled anticipation over the results of the phase III trial presented by Joyce O’Shaughnessy, MD, of Baylor Sammons Cancer Center, Texas Oncology, and US Oncology in Dallas.2 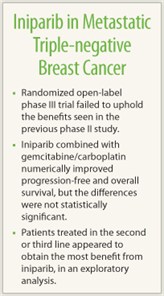 overall survival and .01 for progression-free survival were required to prove statistical significance.

The arms were well balanced except for a shorter disease-free interval after first-line treatment in the three-drug arm (9.5 vs 15.9 months), but the difference in disease-free interval between the two arms in the overall population was not significant. At the time of the primary analysis, 96% of the gemcitabine/carboplatin arm had crossed over to receive iniparib.

In the intent-to-treat population, median progression-free survival was 5.1 months in the gemcitabine/carboplatin/iniparib arm vs 4.1 months with gemcitabine/carboplatin (P = .027), which was a 21% reduction in risk that did not meet the prespecified alpha (P = .01). Median overall survival was 11.8 vs 11.1 months, for a 12% risk reduction (P = .28). Overall response rates were 34% vs 30%, and clinical benefit rates were 41% and 36%, respectively, Dr. O’Shaughnessy reported.

Fifty-one percent of patients received gemcitabine/carboplatin/iniparib treatment in the first-line setting, and an exploratory analysis of this subgroup mirrored the overall results. However, the iniparib-containing triplet given second- or third-line to 43% of patients reduced mortality risk by 35%, with a median overall survival of 10.8 months, up from 8.1 months with gemcitabine/carboplatin. Median progression-free survival was 4.2 vs 2.9 months, a 33% risk reduction.

“An exploratory analysis by prior therapy suggests there is a potential efficacy benefit among second- and third-line patients, though a confirmatory study is needed,” Dr. O’Shaughnessy said.

By using prespecified baseline factors in the multivariate Cox model, but replacing the time since diagnosis of metastatic disease with the disease-free interval from primary breast cancer surgery, the investigators found that patients receiving iniparib in the second- or third-line setting had their risk of progression reduced by 29% (P = .05) and mortality risk reduced by 29% (P = .031).

The discussant of the iniparib data (abstract 1007), Lisa A. Carey, MD, Medical Director of the University of North Carolina Breast Center, noted that the phase II results provoked “great enthusiasm and high expectations from doctors and patients” but the primary statistical endpoint was not met....