Initial results from RxPONDER were reported at the 2020 SABCS.2 An update of that analysis, with a median follow-up of 5.3 years, was published in The New England Journal of Medicine on December 1, 2021.3 In San Antonio, Dr. Kalinsky provided yet another update of this important trial, based on 6.1 months’ median follow-up.

The randomized phase III RxPONDER trial evaluated the benefit of adjuvant chemotherapy in women with hormone receptor–positive, HER2-negative breast cancer and one to three positive lymph nodes. As more analyses are performed on the data, the strategy for this population is becoming increasingly personalized.

“As opposed to distant relapse–free survival, disease recurrence–free interval excludes death from non–breast cancer or unknown causes, and only includes distant recurrence or death from breast cancer,” Dr. Kalinsky explained. “This is a clinically important outcome given its relevance to long-term breast cancer–related survival.” 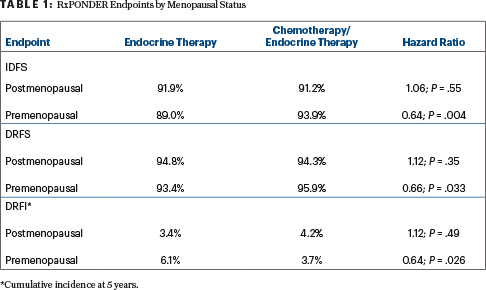 “We then performed exploratory post hoc analyses in premenopausal women, given the number of questions that have arisen since we presented these data,” Dr. Kalinsky said, cautioning that the analyses are based on small subsets. These included analysis of outcomes in women with pN1 disease (including pN1 micrometastatic disease),1 a 2-year landmark invasive disease–free survival analysis based on ovarian function suppression or not in the endocrine therapy arm,3 and 2-year landmark invasive disease–free survival analysis between patients with regular menstrual periods or not in both treatment arms.2 “These data should be interpreted with caution, given that confounding factors can change over time,” he said.

The endocrine therapy arm had double the proportion of women reporting regular menses in the first 6 months (50% vs 25%), but over time the rate of regular periods decreased in both arms (16% vs 9%).  The invasive disease–free survival was numerically improved in patients no longer having regular periods (vs having them) in the first 24 months in both treatment arms, with hazard ratios of 1.48 in the endocrine therapy–alone arm and 1.56 in the chemotherapy arm, though the confidence intervals for these benefits was wide, he noted.

“It remains unclear if ovarian function suppression can replace chemotherapy in premenopausal women with hormone receptor–positive, HER2-negative, node-positive breast cancer,” Dr. Kalinsky said. “We conclude that future randomized trials should be considered to address this important clinical question in a genomically defined population.”

Commenting on the update of RxPONDER presented at the 2021 San Antonio Breast Cancer Symposium were Anne Blaes, MD, MS, Associate Professor of Hematology/Oncology at the University of Minnesota and Co-Director of the Screening, Prevention, Etiology and Cancer Survivorship Program at the Masonic...