Cancer on the Global Stage: Incidence and Cancer-Related Mortality in Burundi

The ASCO Post is pleased to continue this occasional special focus on the worldwide cancer burden. In this issue, we feature a close look at the cancer incidence and mortality rates in Burundi. The aim of this special feature is to highlight the global cancer burden for various countries of the world. For the convenience of the reader, each installment will focus on one country from one of the six regions of the world as defined by the World Health Organization (ie, Africa, the Americas, Southeast Asia, Europe, Eastern Mediterranean, and Western Pacific). Each section will focus on the general aspects of the country followed by the current and predicted rates of incidence and cancer-related mortality. It is hoped that through these issues, we can increase awareness and shift public policy and funds toward proactively addressing this lethal disease on the global stage.

Burundi is a small, landlocked nation in the East-Central Africa region, located south of the Equator. Previously a kingdom for more than 3 centuries, Burundi became a European colony in the late 19th century under German and Belgian authority. In 1962, the nation gained its independence, and it is one of few countries in Africa whose boundaries were not drawn by colonial powers but instead were developed by the Burundian monarchy. The capital of Burundi, Bujumbura, sits at the northeastern end of Lake Tanganyika. Located near the southernmost source of the Nile River, Gitega is the second largest city in Burundi and is considered the cultural capital of the country.1

With a population of 12.2 million, 90% of whom live in rural areas, Burundi has one of the highest population densities on the African continent.1,2 Most people in Burundi are Hutu, for whom farming is the traditional primary livelihood. Historically, however, much of the political and economic power of Burundi has been with the Tutsi minority. Both ethnic groups speak Rundi (Kirundi), a rare linguistic homogeneity in the sub-Saharan Africa region. Political instability in Burundi following independence culminated in a civil war that spanned more than 12 years, beginning in 1993.3

Over the past few decades, health-care efforts in Burundi have prioritized communicable diseases, including human immunodeficiency virus. As a result, cancer care has been largely overlooked, and cancer remains a serious public health concern.

One of the major challenges facing the Burundian health-care system is limited resources. There are approximately 0.1 physicians and fewer than 1 hospital bed per 1,000 people in Burundi, and very few pathology laboratories located in the country.1,4 Three computed tomography scanners exist in Burundi for the entire population, and there are no capabilities for magnetic resonance imaging.5 Further, chemotherapy services are not universally available in public health-care facilities.5

The lack of a basic cancer care infrastructure adds to the general shortage of specialized practitioners needed for a multidisciplinary approach to cancer care.5 In addition, low public awareness about cancer symptoms and risk factors contributes to patients presenting with advanced stages of disease, which precludes curative-intent treatment.6 As a result of this cancer care landscape domestically, patients who can afford international care are referred abroad for treatment.7 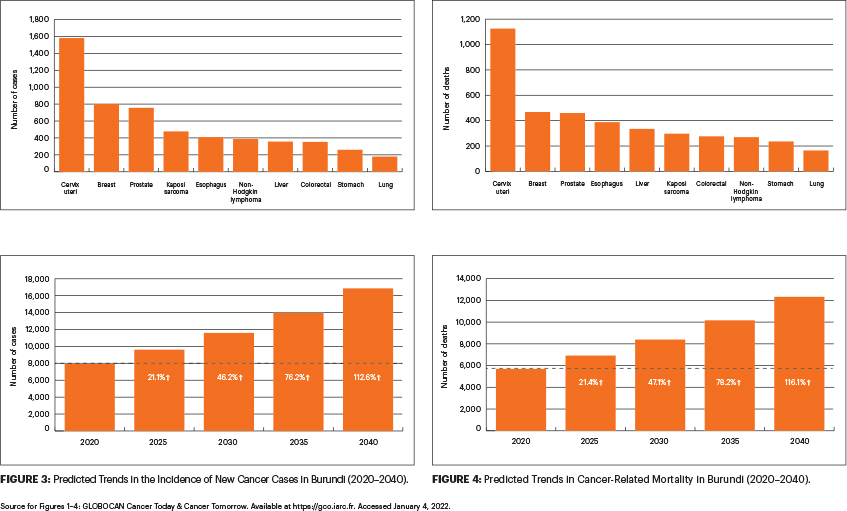 Cervical cancer has the highest cancer incidence and is the most common cause of cancer-related mortality in Burundi. In 2020 alone, there were over 1,500 new cases and 1,120 deaths related to cervical cancer. The next most common cancers by incidence in Burundi are breast cancer (802 cases), prostate cancer (756 cases), Kaposi sarcoma (477 cases), and esophageal cancer (409 cases). Similarly, cancer-related mortality in the country is led by breast cancer (468 deaths), prostate cancer (460 deaths), esophageal cancer (388 deaths), and liver cancer (335 deaths).8

Burundi faces health-care challenges similar to those of other low- and middle-income countries, such as the lack of robust cancer surveillance and response systems.9 Patient outcomes, including the likelihood of survival, are significantly affected by limited access to effective prevention strategies, lack of robust early detection programs, and limited optimal treatment services.9 Expanding cancer surveillance and other response programs offers the opportunity to meet the needs of the rising cancer burden in Burundi. Without adequate intervention, cancer cases and deaths are expected to rise more than 100% over the next 2 decades.8

Over the previous decade, governmental action has demonstrated increased attention to national cancer care in Burundi. The National Cancer Control Program was initiated in 2016, for example, serving as a comprehensive approach to deliver cancer services across the country. Implementation of the plan, however, has been challenged by competing health priorities and lack of cancer care infrastructure. For example, Ndizeye et al reported that less than 10% of health-care providers have adequate knowledge about cervical cancer screening, and even fewer are well versed with cancer treatment algorithms.7 Furthermore, screening services for breast, colorectal, and prostate cancers—which contribute the most to cancer-related mortality—are not widely available. 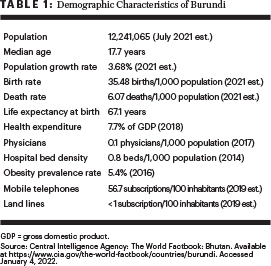 In a move to increase attention to cancer care, the Burundian government requested an imPACT Review in 2018, which was conducted by the International Atomic Energy Agency (IAEA), World Health Organization, and International Agency for Research on Cancer. (An imPACT Review is a unique assessment tool developed by the IAEA, derived from the “integrated mission of the Programme of Action for Cancer Therapy.”) The purpose of this ­Review was to assess and evaluate the nation’s capacity to address the rising cancer burden. It focused on various avenues in cancer care, ranging from prevention and early diagnosis to treatment and cancer registration systems.

“Our priorities are to establish a national, multisectoral committee to review our strategic cancer control plan and to mobilize the human and financial resources necessary to provide adequate cancer care,” noted Dr. Innocent Nkurunziza, the National Program Director for the Integrated Fight Against Non-Communicable Diseases and President of the Thematic Group on Cancer at Burundi’s Ministry of Public Health, in an interview with the IAEA.6

Dr. Nkurunziza also highlighted the need for strategies to strengthen prioritization of services and inform decision-making: “There is a need for continuous action to counter the suffering and economic hardship caused by cancer. The recommendations of the imPACT Review mission will greatly enhance the ability of Burundi’s health system to take a comprehensive approach in delivering cancer services,” he said.6

In addition, the Burundi government reported plans to establish radiotherapy and nuclear medicine facilities in the coming years, with support from the IAEA. It is well recognized that the success of these initiatives will require the presence of an adequate and well-trained workforce.5 Experts who conducted the imPACT review also emphasized the need for improved data collection to help with prioritization and decision-making that can translate to action at the national and local levels.6

Global partnerships such as those implemented by the imPACT Review may address the continued and urgent problems posed by cancer in Burundi. Successful international and public-private partnerships to raise cancer awareness, prevention, and response have been recorded in the East Africa region, which could be scalable to other nations, including Burundi.10,11 It is envisaged that these combined efforts will help in tackling the rising cancer burden and thereby benefit patients with a cancer diagnosis in Burundi.

DISCLOSURE: Ms. Craig reported no conflicts of interest. Dr. Are is a board member with Global Laparoscopy Solutions; has received research funding from Pfizer; and has a patent with the University of Nebraska Medical Center for a laparoscopy instrument.