The text and photograph here are excerpted from a four-volume series of books titled Oncology: Tumors & Treatment, A Photographic History, The Anesthesia Era: 1845–1875 by Stanley B. Burns, MD, FACS, and Elizabeth A. Burns. The photograph appears courtesy of Dr. Burns and The Burns Archive. To view additional photos from this series of books, visit burnsarchive.com.

During the first half of the 19th century, Valentine Mott, MD (1783–1865), was one of the outstanding figures in American surgery and New York’s leading surgeon. Dr. Mott made many contributions to the advancement of the profession, notably in vascular surgery, operations on bones and joints, and especially in oncologic surgery. In 1841, he was one of the founders of the medical faculty of the University of New York, which evolved into the present New York University Medical School. 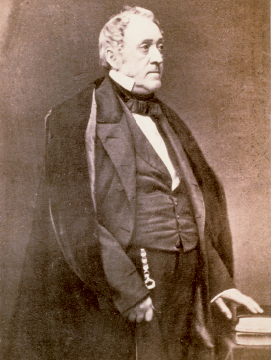 Dr. Mott’s innovations in cancer surgery were landmark. These contributions laid the foundation for other surgeons to attempt the removal of facial tumors. In 1822, he published a paper focusing on a case of osteosarcoma in which the right side of the lower jaw was removed successfully after tying the carotid artery. In 1828, he published another paper on an account of a case of osteosarcoma of the left clavicle, in which exsection of that bone was successfully performed. In 1843, in the American Journal of Medical Sciences, he reported the successful removal of a large fibrous tumor from the nostril that extended into the pharynx on July 8, 1841. Dr. Mott divided the nasal and maxillary bones to remove this tumor. All of these operations were performed in the era before anesthetics.

Prior to the introduction of general anesthesia, operating for stones (calculi occluding the urinary tract) was a common procedure because of the intractable pain. Successfully “cutting for stone,” or lithotomy, directly opening the bladder and removing the stone, became the hallmark of a great surgeon. In the mid-19th century, Dr. Mott seemed to hold the world record in his time for lithotomy. Of his first 50 cases, only 1 patient died. England’s most famous urologist, Sir Henry Thompson, MD (1820–1904), performed 2,000 lithotomy cases, of which 1 in 8 died. Philadelphia’s Samuel David Gross, MD (1805–1884), considered America’s greatest surgeon, also reported about 2,000 cases and a mortality of about 1 in 11.

Dr. Mott is noteworthy in the history of medical photography, as he was involved in the first recorded case of consultation by photography. There is an extant daguerreotype of a patient with a tumor of the forehead that was sent to him for diagnosis and possible treatment in June 1856 by Dr. E.A. Flewellen of Thomaston, Georgia. Dr. Mott’s advice was not to operate for this condition. In 1854, Mott had presented five similar cases to the Royal Clinical Society in London, in which he termed the condition “pachy-dermatocele” (This patient had neurofibromatosis.)

Dr. Mott disliked writing, and although he reported his cases and operative procedures, he never wrote a surgical text, which was the usual standard to surgical greatness. However, his pupil Samuel Ward Francis, MD (1835–1886), published in 1860, Report of Professor Valentine Mott’s Surgical Cliniques in the University of New York, Session 1859–1860. In 91 cases, Dr. Francis gave a sense of Dr. Mott’s valuable aphorisms and ingenuity in handling surgical problems.

Dr. Mott’s legacy is the numerous successful neoplastic procedures performed by pioneer oncologists, based on his vascular and cancer surgical innovations. Dr. Valentine Mott is also remembered and honored at Columbia University. When George Hoyt Whipple, MD, was chosen to become Chair of the Department of Surgery in 1931, it was decided to add prestige to his appointment by giving him an honorary chair and title, “The Valentine Mott Professor of Surgery.” ■