Residual cancer burden after neoadjuvant chemotherapy can accurately predict disease recurrence and survival across all breast cancer subtypes, according to the findings from a meta-analysis presented at the 2019 San Antonio Breast Cancer Symposium by W. Fraser Symmans, MD, Professor and Director of Research Operations in Pathology at The University of Texas MD Anderson Cancer Center, Houston.1

This is really about organizing the workflow in pathology to standardize how we evaluate response after neoadjuvant treatment.
— W. Fraser Symmans, MD

“This is really about organizing the workflow in pathology to standardize how we evaluate response after neoadjuvant treatment,” Dr. Symmans said. He explained that pathologists calculate residual cancer burden from multiple factors: primary tumor area, percentage of the tumor area that is invasive cancer, and extent of lymph node involvement. Investigators at The University of Texas MD Anderson Cancer Center put these factors together to develop a residual cancer burden calculator, which computes an index and allocates a classification of pathologic complete response (www.mdanderson.org/breastcancer_RCB). A value of 0 equates to a pathologic complete response. This is then categorized into one of the following three classes: RCB-I (minimal burden), RCB-II (moderate burden), and RCB-III (extensive burden).

“The basic principle is that we estimate the area that still contains residual disease, map that area to the slides that we’ll be looking at under the microscope, and create an image so that we can reconstruct it and be able to determine what area still contains actual cancer,” Dr. Symmans explained. “Then, we combine that with the fraction of that area that still contains invasive cancer cells, as well as the number of positive lymph nodes and the size of the largest metastasis. This is just organizing what we would otherwise report in pathology, but we’re doing it in a quantitative and standardized manner.”

The online calculator page receives about 16,000 visits per month, “so it’s being used out there,” he noted. The website offers instructional videos, protocols, illustrations, and diagrams as resources for the pathologists who use it.

The residual cancer burden index was tightly associated with both event-free and distant disease–free survival. This finding was consistent across 12 clinical sites and all cancer subtypes.

“The most interesting result, in my opinion, is that you see a log-linear relationship for the [residual cancer burden] index score and survival,” Dr. Symmans said. “The implication is that you can take an individual patient’s score representing how much residual cancer she has and calibrate that to an accurate estimate of her risk over time.”

The residual cancer burden index values were associated with 5-year and 10-year event-free survival, as shown in Table 1.

Elaborating on what emerged from the four subgroups, Dr. Symmans said that in the hormone receptor–negative/HER2-positive group, the 69% rate of pathologic complete response was “striking” and “illustrates how effective these current [HER2-targeted] treatments are.” The 20% of patients who were classified as RCB-II and RCB-III had significantly worse survival than the others. “It’s a small quintile of patients that’s still at fairly substantial risk.” 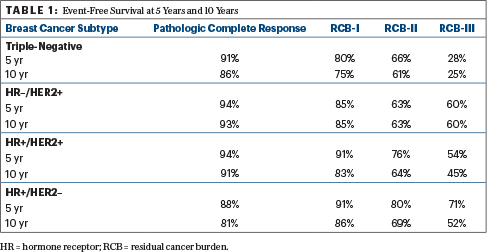 He added, “In the hormone receptor–positive/HER2-negative breast cancer group, where there is still a bit of confusion about whether or not chemotherapy can help patients, we see that the extent of residual disease is strongly prognostic.”

In the subgroup with hormone receptor–positive/HER2-negative disease, he continued, “you can see that there’s clearly an effect on prognosis from the chemotherapy. However, the most prognostic aspect of the distribution of response is where there is the most residual disease—the RCB-III and RCB-II groups. Their long-term risk is still continuing beyond 10 years.”

Message to the Pathology Community

“Looking ahead, if we can standardize the reporting of residual cancer burden, that will only improve its usefulness in determining long-term prognosis,” Dr. Symmans emphasized. “This study is important in showing the generalizability of residual cancer burden, and it’s of sufficient size to generate the evidence to convince the pathology community to change the way we do things.”

Looking ahead, if we can standardize the reporting of residual cancer burden, that will only improve its usefulness in determining long-term prognosis.
— W. Fraser Symmans, MD

Dr. Symmans noted that synoptic reporting is a requirement in oncology, but there is only one synoptic report for invasive cancer—one that is designed for a surgery-first examination. What’s lacking is a neoadjuvant synoptic report that specifically addresses the needs in interpreting a post-neoadjuvant response, he said. “The neoadjuvant model is increasingly related to precision medicine. We are standing at that transition point.” ■

DISCLOSURE: Dr. Symmans holds a patent for the method of calculating residual cancer burden. The residual cancer burden calculator and educational materials are freely and publicly available online. He is also cofounder, owns shares in, and is an unpaid scientific advisor for Delphi Diagnostics.