In this installment of the Living a Full Life series, guest editor Jame Abraham, MD, FACP, spoke with Felix Y. Feng, MD, Professor of Radiation Oncology, Urology, and Medicine; George and Judy Marcus Distinguished Professor; Vice Chair of Translational Research in the Department of Radiation Oncology; and Director of the Benioff Initiative for Prostate Cancer Research at the University of California, San Francisco (UCSF). In their wide-ranging discussion, Dr. Feng addressed his career and family life, and the balance he seeks to maintain between them.

Felix Y. Feng, MD, was born in Stamford, Connecticut, where his parents were pursuing part of their education. “Shortly after I was born, we relocated to Taiwan for 3 years, after which my parents decided to move to Palo Alto, in the San Francisco Bay Area. That’s where I spent the rest of my formative years. After high school, I entered Stanford University in 1994. After receiving my bachelor’s degree in biologic sciences in 1998, I went to Washington University School of Medicine in St. Louis for my MD,” Dr. Feng recounted.

Asked about his decision to pursue a career in medicine, Dr. Feng replied, “My reason for becoming a doctor was shaped by a lot of personal family events. Unfortunately, cancer is prevalent in my family. In fact, all four of my grandparents died of cancer, which certainly motivated me to think about medicine with an emphasis on oncology. During medical school, I became very interested in molecular imaging and finding better ways to detect cancer. So, I ended up doing a residency in radiology at the University of Michigan.”

On mentorship: “The important thing is to recognize the incredible value of mentorship in helping to ensure that we have a continuous stream of dedicated scientists and clinicians in the oncology community.”

On the importance of unwinding with coworkers: “People are most productive when they are happy at work. We work hard and do high-level science, but we also hang out after work.”

On keeping work and family separate: “My philosophy is to work very hard but to have a strong line between work and family. If you do that, your work and your family will benefit.”

He continued, “I met my wife during undergraduate studies at Stanford. We both attended Washington University School of Medicine and did our residency together at the University of Michigan. My wife went straight from medical school into her radiation oncology residency. During my residency, I was a radiologist, and I would come home and talk about the cool computed tomography (CT) scans and magnetic resonance imaging (MRI) I’d performed that day, and she would talk about all the cool patients with cancer she had met. I soon realized that her interactions with patients were much more fulfilling than reading CT scans. After a while, I ended up switching into the same radiation oncology program that she was in, and I never regretted that decision for a minute.”

Dr. Feng noted that the key to academic success rests largely on having a strong relationship with mentors. “I’ve been blessed with a number of phenomenal mentors during my formative years in medicine. My primary mentor was Dr. Ted -Lawrence, who is the Chair of the Department of Radiation Oncology at the University of Michigan. He recruited me to the radiation oncology residency. I actually did my postdoctoral fellowship between my radiology residency and radiation oncology residency in Ted’s lab. I was co-mentored by Dr. Arul Chinnaiyan, a brilliant scientist at the University of Michigan who investigates genomics approaches to understanding cancer biology and discovering new biomarkers,” he said.

“Ted taught me to be a translational radiation oncologist thinking in a bench-to-bedside manner in terms of what we could understand from laboratory models of cancer and how best to move that knowledge into the clinic. Arul taught me not to limit my hypotheses, but instead, to allow the data, model systems, and techniques to generate the hypotheses for me. So, between Ted being a translational scientist and Arul being an innovator in his approaches to creating hypotheses, I acquired a full and rich range of experiences that helped me mature into a researcher,” said Dr. Feng.

Dr. Feng also noted a mentor in his clinical development. “Dr. Howard Sandler was a radiation oncologist at the University of Michigan until he became Chair of the Radiation Oncology Program at Cedars-Sinai Medical Center in Los Angeles. Howard inspired me to focus on prostate cancer, which has become my main clinical interest. Another major mentor was Dr. Lori Pierce, a breast cancer radiation oncologist who is also the incoming President of ASCO for 2020–2021. “She was at the University of Michigan during my early career and was very supportive of my work then in breast cancer,” he said.

“I could go on listing those who helped my career in so many ways, but the list is beyond the scope of this article,” Dr. Feng commented. “The important thing is to recognize the incredible value of mentorship in helping to ensure that we have a continuous stream of dedicated scientists and clinicians in the oncology community.”

Dr. Feng stressed that he and his wife loved their time at the University of Michigan, and in many ways, they fondly consider Ann Arbor to be their home. “Unfortunately, during that time, my sister was diagnosed with metastatic cancer, and she passed away several years ago,” he noted.

“While she was battling cancer,” Dr. Feng said, “she asked if I could come back to the Bay area to help out with her kids, who are the same ages as mine. So, we moved back and ended up taking positions at UCSF. I believe that when you make a decision based on family commitment, it is always the right decision. My parents are still here, as well as others in the family, so returning has enhanced my life in many ways.”

Remarking on the type of rich culture that encourages collaborative science, Dr. Feng noted that in his 3 years at UCSF, he has developed a robust group of fellow scientist-clinicians. “I wear many different hats, but first and foremost is my commitment to treating patients with genitourinary cancer and helping to lead the genitourinary program at UCSF,” he said.

“Our genitourinary cancer clinical program has grown quite a bit,” he continued. “We hired two new faculty members in the past year. Moreover, it’s an exciting time to be in this field, particularly in prostate cancer, which has expanded the use of marvelous new imaging techniques that give us the ability to effectively treat localized cancer as well as patients with metastatic disease.”

He added, “I also head a laboratory that consists of about 20 researchers. About one-third are computational scientists focused on different next-generation genomic sequencing approaches to understand the biology of metastatic prostate cancer. We have multiple ongoing projects in this exciting line of research. The other two-thirds of my group are molecular and cancer biologists, who focus on prostate cancer as well, with a growing interest in bladder cancer.” 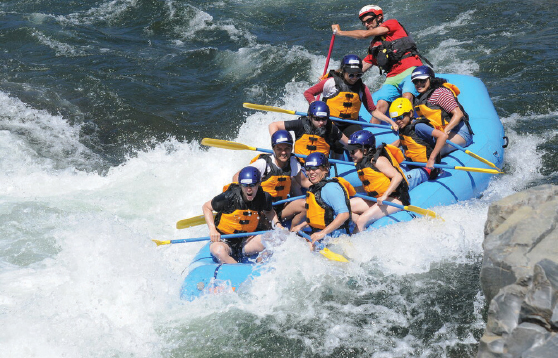 Felix Feng, MD, and his team on their annual camping and rafting trip.

Dr. Feng recently began a new research program called the Benioff Initiative for Prostate Cancer Research, which was funded by a $35 million gift from Salesforce entrepreneur Marc Benioff and his wife, Lynne. The program will bring together scientists and physicians who seek to build a basic science project for prostate cancer at UCSF.

“Our overriding goal is to develop new therapies based on work out of the lab. Over the past few months, I’ve been helping to build the infrastructure for the program, and it’s been an exciting venture into cutting-edge science,” said Dr. Feng.

“The last hat I wear is a shared leadership in the Genitourinary Cancer Committee for NRG Oncology, the international clinical trials group. I help oversee the trial portfolio for prostate, kidney, and bladder cancers. We have a number of ongoing phase III trials looking at combination and targeted therapies incorporated with genomics to risk-stratify patients. We are also looking at ways to optimize different radiation approaches in prostate cancer.”

Asked about his own role as a mentor, Dr. Feng responded, “I think my greatest contribution to the field will be in helping develop the careers of the scientists and clinicians I have the privilege to collaborate with. I tend to recruit self-motivated scientists, and when I sit down with them, my goal is to help them define their personal short- and long-term goals. I then help set a path to achieving those goals, which often means bringing in co-mentors to help provide specific expertise. It is a very rewarding experience.”

Work and Play Together

Dr. Feng stressed the importance of unwinding as a team, which provides opportunities to strengthen the bonds within his group. “People are most productive when they are happy at work. We work hard and do high-level science, but we also hang out after work. For instance, we have a yearly overnight camping and rafting trip. Moreover, I also encourage my lab partners to bring their families to outside work events. We recently rented a boat and went out on the bay to watch a Navy air show during Fleet Week, and we’re planning a trip where we go skiing as a group. So, we do a lot to create a fully integrated working relationship that goes beyond the lab. In short, we all like to be together, and that creates a dynamic work environment.” 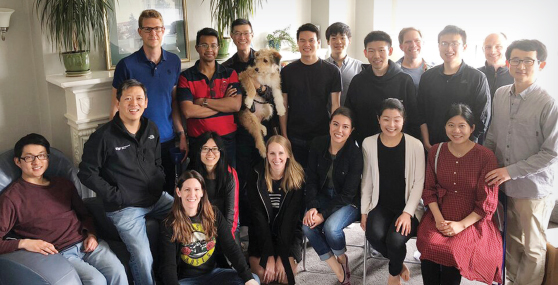 Members of the Feng Laboratory at UCSF.

Dr. Feng then addressed the issue of burnout on a personal level. “My wife is a radiation oncologist at UCSF, and we have a rule in our house: we don’t discuss work when we’re with the family. We’ve had that rule since residency, and it’s interesting in that my wife is accomplished academically, and sometimes I don’t even know what she’s done recently. One of my residents said, ‘Wow, that was a great paper your wife coauthored in JAMA Oncology,’ and I honestly hadn’t known she’d published it. My philosophy is to work very hard but to have a strong line between work and family. If you do that, your work and your family will benefit.” ■

DISCLOSURE: Dr. Feng has been compensated for a leadership role with PFS Genomics; owns stock or other ownership interests in Nutcracker Therapeutics, PFS Genomics, and SerImmune; has received honoraria from Genentech; has served in a consulting or advisory role for Bayer, Blue Earth Diagnostics, Celgene, EMD Serono, Janssen Biotech, Medivation/Astellas, and Sanofi Genzyme; has received research funding from Zenith Epigenetics; and holds intellectual property interests for a molecular signature to predict radiation resistance in breast cancer, which was patented by the University of Michigan. It is in the process of being licensed to PFS Genomics.